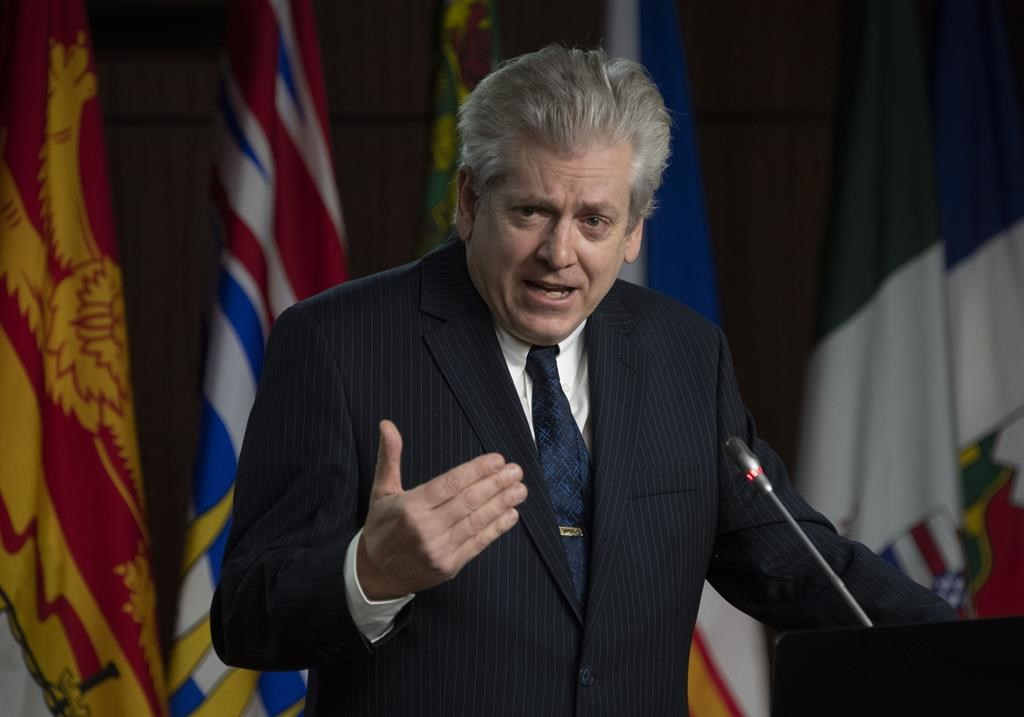 OTTAWA — New Democrats and Liberals are condemning comments by Conservative Leader Erin O'Toole on the original mission of residential schools, characterizing his remarks as corrosive and demanding an apology.

"It was meant to try and provide education. It became a horrible program that really harmed people. And we have to learn from that," O'Toole said in the Nov. 5 video.

Christian churches and the federal government launched the boarding schools in the 1880s and kept them going for more than a century, seeking to convert and assimilate Indigenous children, who suffered widespread physical and sexual abuse at the institutions.

NDP ethics critic Charlie Angus told reporters Wednesday it is "false" and "disgraceful, revisionist race-baiting" to suggest that education was the prime goal of the school system, of which Ryerson University namesake Egerton Ryerson was a key architect.

"We are talking about policies that set out to destroy families, to destroy identities, to literally 'kill the Indian in the child,'" Angus said, citing a phrase associated with the system's expansion in the early 20th century.

"This is really cheap, cheap stuff from him."

Crown-Indigenous Relations Minister Carolyn Bennett said she was "disappointed" to see O'Toole turn the legacy of residential schools into a "partisan game."

"Mr. O’Toole needs to listen to the families and survivors and admit that his remarks caused harm, that he is sorry and that he will work with them to ensure that he and his colleagues will never again try to defend the indefensible," Bennett said in a Twitter post.

"He has also been clear in highlighting the damage cancel culture can have. Defending free speech, especially on campus, is important, just as remembering our past is an important part of aspiring for better in the future," she said in an email.

The hashtag #ResignOToole was trending Tuesday night on Twitter, and New Democrat Leah Gazan called on him to step down.

"Time to silence ignorant racist voices that claim founders of residential schools were trying to educate Indigenous children," the Winnipeg MP said in a tweet.

The name of Toronto's Ryerson University has come under scrutiny in the last three years, part of a broader reassessment of lionized historical figures in an age of heightened social and cultural awareness.

In 2017, a student-led campaign pushed for the institution to change its name out of respect for residential school survivors. The campaign highlighted recommendations from Egerton Ryerson — a Methodist minister and public education advocate — on Indigenous schools that helped pave the way for the program.

The effort also prompted considerable backlash from the wider student community, who criticized it as being impractical and disrespectful in its own right.

The same year, Trudeau renamed the former Langevin Block building, which sits across from Parliament Hill and houses the Prime Minister's Office, arguing at the time that keeping the name of Sir Hector-Louis Langevin — a 19th-century cabinet minister associated with the residential school system — on the edifice clashed with his government's vision.

O'Toole referenced both Langevin and Ryerson in the video.

"When Egerton Ryerson was called in by Hector Langevin and people, it was meant to try and provide education," he said.

"Where is the woke left calling for the renaming of the Trudeau airport?" O'Toole asked, referring to Montreal's main air hub.

How Chrétien opened new schools after Mulroney axed the program was not explained.

Sen. Murray Sinclair told the National Observer in September that the cultural blind spots of the Fathers of Confederation are not comparable to Pierre Trudeau's.

The Truth and Reconciliation Commission, chaired by Sinclair, issued its final report on residential schools five years ago. The nearly 4,000-page account details the harsh mistreatment inflicted on Indigenous children at the institutions, where at least 3,200 children died amid abuse and neglect.

Angus said O'Toole's comments fit into "a pattern among deniers to rewrite the facts that were found in the Truth and Reconciliation Commission."

He pointed to Sen. Lynn Beyak, who was booted from the Conservative caucus after posting derogatory letters about Indigenous people on her website in 2017, and who once again faces the prospect of expulsion from the upper chamber with a motion before the members.

— With files from Stephanie Levitz

Given all the awfulness in

Given all the awfulness in the world today, from the climate crisis to the never-ending slow-motion genocide of BIPOC people to our horrible electoral system, I think the "woke left" has too much on our plates to worry too much about the name of an airport. But it might be worth considering in the future when we have a mo. Thanks for the suggestion, Erin.

Given the awfulness the human race has perpetrated throughout its existence, "we", woke or not, left or right, are still struggling with our history and its awfulness even as we perpetrate more of it. I am not at all convinced that the human brain is reliably capable of reform. Ergo, I am not sure that our species is capable of surviving the existential threats bearing down on us.

In spite of our Sapien specie

In spite of our Sapien specie's awfulness we have managed to create the existential threats bearing down on us. If the accumulating evidence, science is reporting on the Internet may be taken as valid, and I think it must, we have little time left to change to a survival culture. Hashing decisions of the past to make short term political points seems a waste of time, unless the objective is to hasten extinction. This Finite Earth's Biosphere is being measured now, and it is shrinking in it's carrying capacity at an accelerating rate, perhaps more than 2X the sustainable level, by Canadians' average impact applied globally. Seems to me what brain power we can get to work as our political elite might better focus on a sustainable future for our young and their progeny, as the end game. That would be a great Christmas Gift and aspiration for 2021