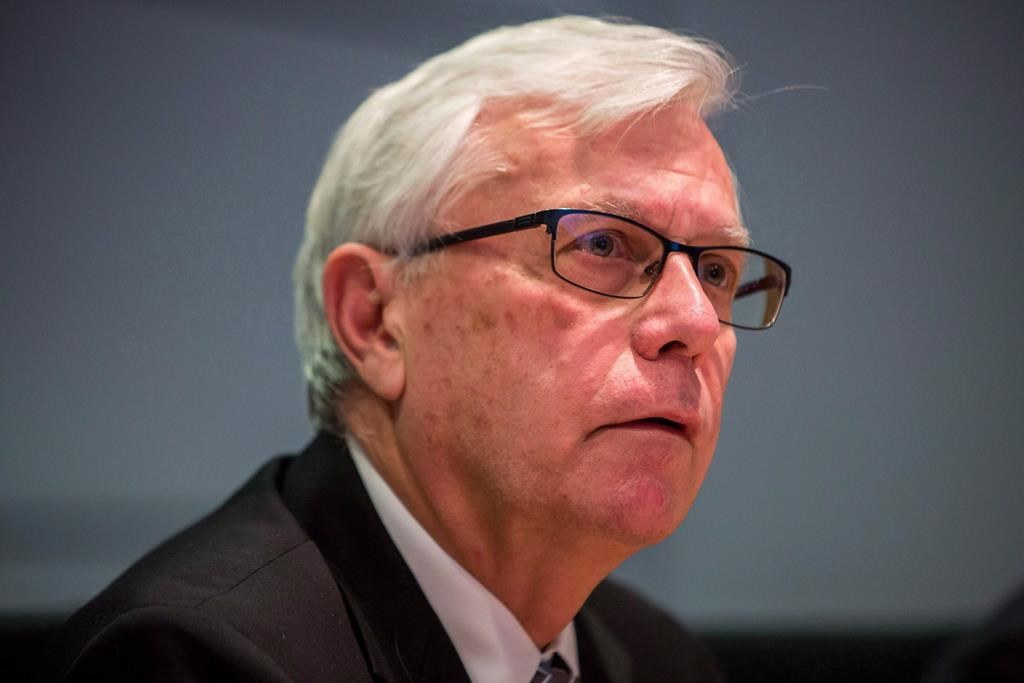 Former clerk of the legislative assembly Craig James makes a statement to the media in Vancouver on Monday, November 26, 2018. File photo by The Canadian Press/Ben Nelms
Previous story
Next story

The former clerk of the British Columbia legislature has been charged with four counts of breach of trust and two counts of fraud in excess of $5,000.

The BC Prosecution Service says in a statement on Friday that two special prosecutors approved the charges against Craig James following an "extensive RCMP investigation into the activities of senior staff at the British Columbia legislature."

James and sergeant-at-arms Gary Lenz were suspended from their jobs two years ago and retired in 2019.

Lenz and James have denied any wrongdoing since they were placed on administrative leave by a unanimous vote of the legislature.

The prosecution service says James was scheduled to make his first appearance on the charges in a Victoria court on Friday.

None of the allegations against James have been tested in court.

The statement from the prosecution service makes no mention of Lenz.

The RCMP said in November 2018 that it was investigating staff at the legislature, but it did not say who was the subject of the probe.

"The special prosecutors were given a mandate to provide legal advice to the RCMP investigators as may be necessary, conduct any related charge assessment and assume conduct of the prosecution if charges were approved," the prosecution service says in its statement announcing the charges.

Their appointment was intended to avoid any potential for real or perceived improper influence in the administration of justice, it says.

After the two men went on leave, former legislature Speaker Darryl Plecas produced a report in January 2019 outlining allegations of misspending at the legislative assembly.

James released a 24-page response and said the report by Plecas was going "out of its way to smear my character.''

"It contains opinions and innuendo which are neither accurate, nor fair. It attributes statements to me which I never made, and conduct in which I never engaged.''

Lenz said in his 62-page response that the expenses he charged were legitimate and reasonable.

"The trips that I took were not boondoggles," he said in the document. "They were for important business of the legislative assembly."

Beverley McLachlin, the former chief justice of the Supreme Court of Canada, was appointed after Plecas's report was released to look into the allegations against James and Lenz.

In a report, she said James improperly claimed benefits and used legislature property for personal reasons, but Lenz did not engage in misconduct.

Her report also said there was a lack of clarity in authority over expenses and administrate matters that were central to her investigation.

She said James claimed expenses for suits, luggage and a private life insurance premium for himself. McLachlin also said James engaged in misconduct by directing the creation of benefits for his personal advantage, including retirement and resignation benefits.

James said in a statement in May 2019 announcing his retirement that he has been in public service for more than four decades and has fond memories of his time at the legislature, but he'd "had enough."

"I have been publicly ridiculed and vilified. My family has been deeply hurt and continues to suffer humiliation. In an effort to put an end to that, I have decided to retire, and reach a settlement with the legislative assembly,'' he said.

In the statement, James said he provided detailed written submissions and supporting documents to the legislative assembly about the allegations made against him, but many of them were not referred to or addressed in McLachlin's report.

Lenz initially asked to be reinstated when McLachlin cleared him of misconduct allegations while also acknowledging he was still the subject of a police investigation.

He decided to retire in October 2019, saying he did so with "sincere regret."

"I have carried out my duties for the people of British Columbia with the utmost integrity and am proud of the many initiatives that have been put in place during my time as sergeant-at-arms,'' said Lenz in a statement.

This report by The Canadian Press was first published Dec. 18, 2020.