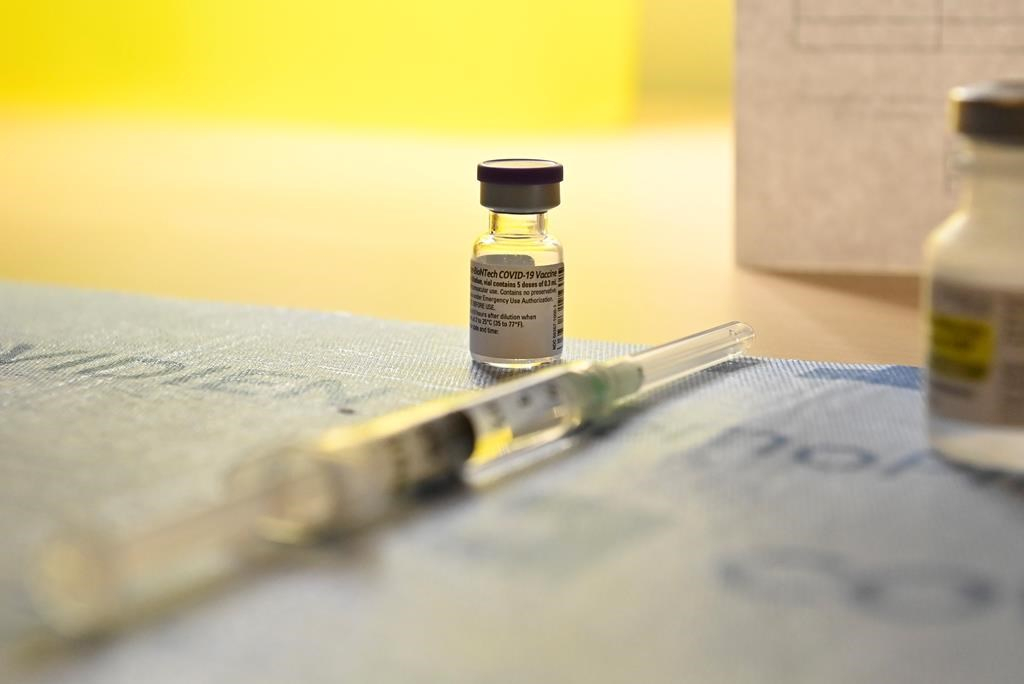 A syringe of the COVID-19 vaccine waits to be administered in Toronto on Monday, Dec. 14, 2020. File photo by The Canadian Press/Frank Gunn
Previous story
Next story

The COVID-19 pandemic continued to wreak havoc across the country on Sunday, causing the first deaths in Nunavut and, according to media reports, pushing Ontario towards a province wide lockdown.

Citing sources briefed on the provincial plan, two media outlets, Global News and 680 News, said the Ontario government is poised to announce a sweeping shutdown of non-essential services on Monday.

The duration of the lockdown will vary in length depending on the region, the outlets said in reports released Sunday afternoon.

A spokesperson for Ontario Premier Doug Ford did not immediately respond to a request for comment.

The province has been holding emergency talks over the weekend to discuss additional pandemic measures in the wake of several consecutive days with case counts exceeding 2,000. The new restrictions are expected to be announced Monday.

Meanwhile, Nunavut reported its first two deaths related to the novel coronavirus on Sunday as case counts remained high in several provinces, including Ontario and Quebec, which account for the bulk of the country's infections.

A joint statement issued by Nunavut's premier, health minister and chief public health officer said a resident of Arviat and one from Rankin Inlet died Saturday.

The territory had no cases of COVID-19 until November, and has since recorded 259.

The news comes a day after Canada surpassed 500,000 confirmed cases of COVID-19.

The latest 100,000 cases were recorded across the country over just 15 days -- the shortest growth period since the pandemic was declared in March.

The two provinces hardest hit by the pandemic, Ontario and Quebec, each reported more than 2,000 new infections Sunday, with Ontario's tally at 2,316 and Quebec's at 2,146. The provinces also recorded 25 and 21 new deaths, respectively.

Out east, Nova Scotia and Newfoundland and Labrador each reported two new cases of COVID-19 on Sunday.

The new infections came as Ottawa opted to ban travel from the U.K. for 72 hours, effective first thing Monday.

Prime Minister Justin Trudeau said the measure is necessary to protect Canadians from a new strain of the virus that causes COVID-19 that is quickly spreading through the U.K.

The Public Health Agency of Canada said that while early data suggests the new strain is more transmissible than other variants of the novel coronavirus, there's nothing to suggest that it has any impact on symptom severity, antibody response or vaccine efficacy.

The agency said the variant has yet to be found in Canada.

At the same time, a new online survey shows the majority of Canadians report feeling optimistic about the new year in light of the COVID-19 vaccines.

A report commissioned by the Association for Canadian Studies and conducted by Leger said 70 per cent of those polled said they were somewhat optimistic about 2021, while 15 per cent reported feeling very optimistic.

Quebecers were slightly more positive overall, with 87 per cent reporting some level of optimism, compared with 84 per cent in the rest of Canada.

Those who described themselves as very optimistic were the most likely to say they will get immunized once a shot is publicly available.

The survey polled 1,528 Canadian adults between Dec. 11 and 13. According to the polling industry's generally accepted standards, online surveys cannot be assigned a margin of error because they do not randomly sample the population.