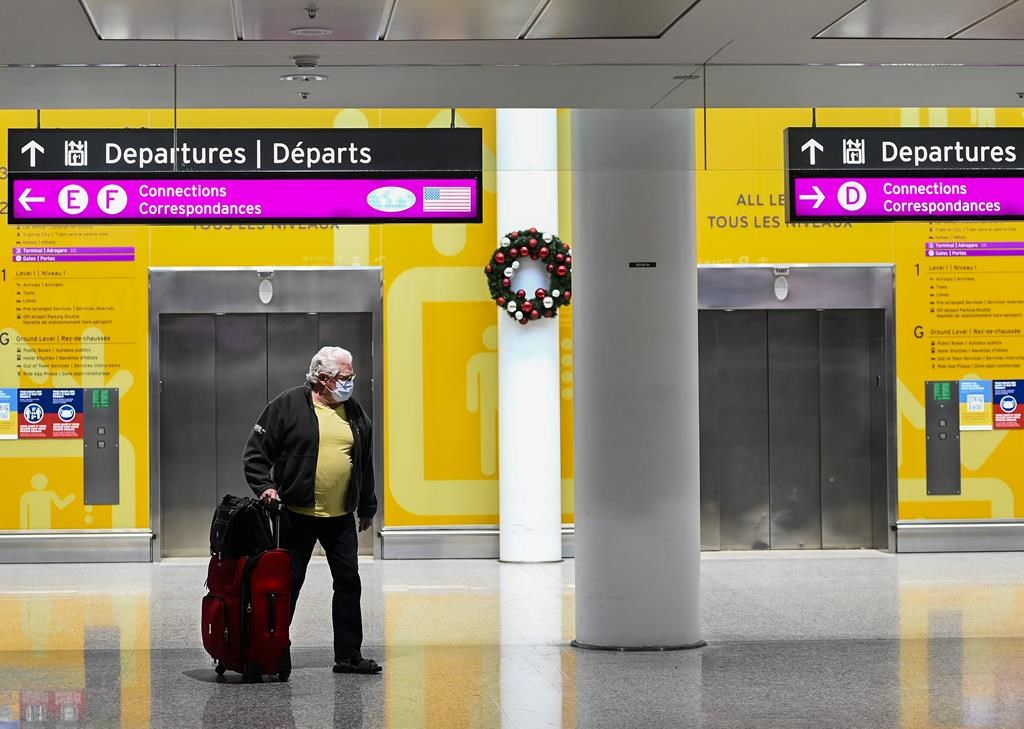 A man makes his way through Pearson International Airport during the COVID-19 pandemic in Toronto on Monday, Dec. 14, 2020. THE CANADIAN PRESS/Nathan Denette
Previous story
Next story

Late Sunday, the federal government announced it was banning all incoming passenger flights from the U.K. for 72 hours due to a new manifestation of the novel coronavirus dominating cases in that country.

The closure came after months of gradual easing up on who is allowed into Canada, after the near-total shutdown of entries back in March.

First, a very tight list of essential workers were allowed in. Then that list was expanded to allow more workers, such as agricultural labourers. Then the government expanded the list of eligible family members able to join or visit relatives in Canada, and has since expanded that list further.

Most incoming travellers are required to quarantine for 14 days and are screened for symptoms of COVID-19. If they violate quarantine, they can face heavy financial fines or jail time.

But Ford compared the way the border is being managed to a leaky roof.

He said close to 64,000 people arrived at Toronto’s Pearson airport last week alone and suggested they were basically unchecked.

"Let’s get the testing at the airport and stop the leak," he said.

"It doesn’t matter if there’s 10 people getting through, that’s 10 too many that are going to be out in the community spreading COVID."

The remarks came as Ford ordered a provincewide shutdown to slow the spread of the virus, becoming the latest provincial leader to implement new measures as case counts in Canada rise rapidly.

"It doesn’t matter if there’s 10 people getting through, that’s 10 too many that are going to be out in the community spreading COVID," Ontario Premier Doug Ford said Monday. #COVID19 #cdnpoli

He said he’s been asking the federal Liberals for months to move ahead with airport testing and the province gets the door slammed in its face.

He said the Ontario government will institute COVID-19 tests at Pearson airport with the help of the airport authority.

"And if they don’t want to help us, well, we’ll be doing … checks on the side of the road as people exit because we’re not putting people at risk here at Ontario," he said.

Earlier this year, the federal government began a pilot project at the Calgary airport that sees people tested upon arrival. If that test comes back negative, a traveller can leave quarantine as long as they return for a second test six or seven days after they’ve landed.

As of Dec. 18, 18,021 people had participated. Less than one per cent of those who were tested a second time tested positive, according to data published by the province of Alberta.

Early science suggests the new variant of COVID-19 detected in Britain is more transmissible than other strains, though so far there is no evidence it has impact on the severity of symptoms, or the effectiveness of existing vaccines.

Still, the federal government said it was closing the border to arriving flights to give public health officials time to gather further evidence and conduct additional research.

Travellers from the U.K. who arrived in Canada Sunday were subject to secondary screening and enhanced scrutiny of their quarantine plans, Health Canada said.

Passengers who arrived "recently" will receive additional direction from the government, Health Canada said in a statement Monday.

Opposition critics said the border closure to the U.K. was a good move but questioned the timeline and what the Liberals actually know about this new variant of the virus.

"I’m a little bit concerned about the 72 hours. I understand that they want to move in incremental steps but I’m not sure that we’re going to have the scientific basis for enough information in that quick period of time," NDP health critic Don Davies said at an unrelated event Monday.

In a statement, a spokeswoman for Conservative Leader Erin O’Toole said the party has long been calling for travel restrictions from high-risk regions, and yet throughout the pandemic international flights have continued to land.

The new variant was first identified in the fall, Tucker said, and is present in other countries.

“Now, we are left wondering if the new COVID-19 variant in the U.K. is already in Canada," Chelsea Tucker said in an email.

Health Canada said it is analyzing Canadian cases to determine if the variant has previously been observed in the country.

Whether or not to shut the border to travellers from specific regions was a flashpoint in the public debate around Canada’s response to COVID-19 in the early days of the pandemic.

The Conservatives, and others, had demanded travellers from China be banned, given the novel coronavirus is believed to have originated in that country.

Research has since shown that cases that spread in Canada mostly originated in people coming from Europe and the United States.

By The Canadian Press | News | December 21st 2020
Coronavirus in Canada