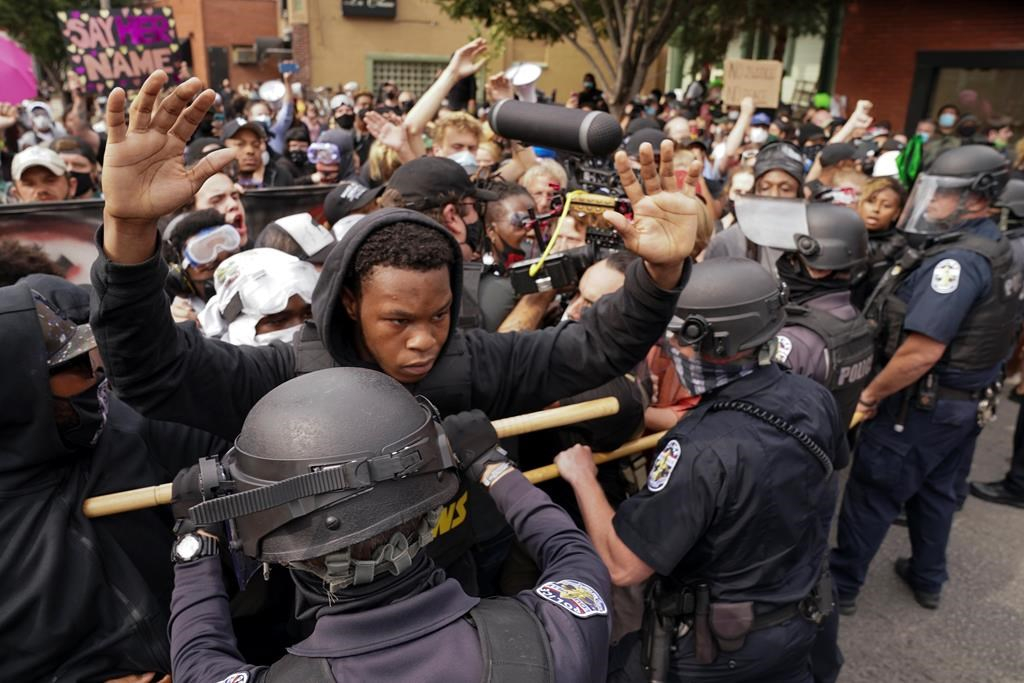 Police and protesters converge during a demonstration on Wednesday, Sept. 23, 2020, in Louisville, Ky. File photo by The Associated Press/John Minchillo
Previous story
Next story

Fifty-five people were killed or injured in police shootings in the first 11 months of this year and justice experts say there are lessons Canadian police forces can learn from those in other countries.

Demonstrations around the world called for accountability and transparency after police shootings and other officer-involved deaths in the United States over the summer.

Canada has had significantly fewer police shootings than its neighbour to the south, but more than other countries where officers don’t carry guns as regularly.

Kevin Walby, an associate professor of criminal justice at the University of Winnipeg, points to the United Kingdom, where not all officers carry guns. Instead, there are special firearms-equipped teams.

“They are just not all walking around with their hands on their guns like they seem to be more and more in Canada,” Walby says. “It signals a big difference in police culture."

In 2018-19, there were three fatal police shootings in England and Wales, and the year prior there were four, show figures from the Independent Office for Police Conduct.

In Scandinavian countries such as Finland and Norway, Walby says, officers carry firearms at an even lower rate than in the U.K. There were no police shooting deaths in Norway in 2019.

He says it makes a difference if officers carry guns. But societal issues here are also a larger contributor to confrontations with police.

Social support for housing and addictions in the U.K. and Scandinavia is funded at a higher level than in Canada, Walby says.

A Canadian Press analysis of police shootings between Jan. 1 and Nov. 30 found that mental health and addictions played a role in a significant number. All of the police shootings that happened during wellness checks were fatal.

Fifty-five people were killed or injured in police shootings so far this year. Should police still carry guns? #Police #guns

Akwasi Owusu-Bempah, an expert in race and criminal justice at the University of Toronto, says taking guns from police may reduce shootings, but it won’t necessarily stop all fatal encounters.

"In the United Kingdom ... people are still killed in police custody and that is particularly during arrest or at a police station," says the assistant professor of sociology.

"It goes beyond just shootings in the streets."