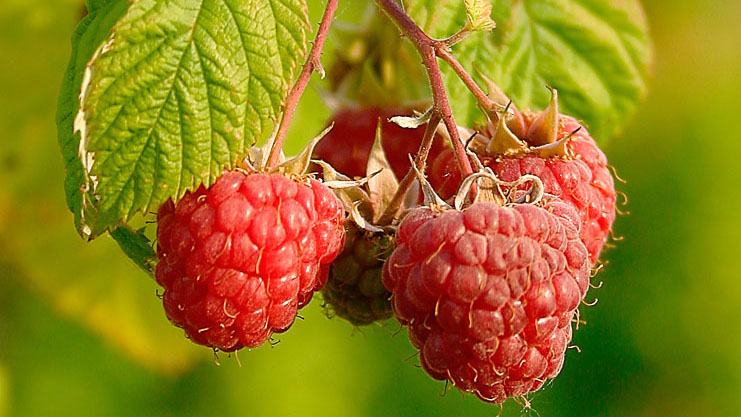 The province hopes the $90,000 infusion will support new and small raspberry farmers who are concerned about unstable markets. Photo by Juhanson/Wikimedia Commons (CC BY-SA 3.0)
Previous story
Next story

The B.C. government recently announced funding to revitalize the raspberry industry, but growers say it won’t be enough to secure the future of raspberry farms.

The province is investing $90,000 in a new Raspberry Replant Program to help growers increase the amount of acreage planted with varieties suitable for fresh and individually quick-frozen (IQF) raspberry markets. IQF products include standup pouches, bags or boxes that contain mostly whole fruit and are sold in grocery store freezer aisles.

Small-scale raspberry growers in the province who own between one and 10 acres of land are eligible for the program, which is accepting applications until Jan. 11.

Funding will be allocated on a per-plant basis to a maximum of $3,300 an acre.

“We recognize that they (the province) are investing in the raspberry industry, and it is now up to the raspberry growers and processors in British Columbia to make this program a success,” said James Bergen, chair of the Raspberry Industry Development Council, thanking the agriculture ministry for its investment.

The cost-sharing funding program aims to support the B.C. raspberry industry in local and global markets, while creating jobs and increasing food security for British Columbians.

However, Amanjot Singh Grewal of Grewal Berry Growers Ltd. calls the initiative a joke and says the program has such a short application window it is unlikely to reach many farmers. Most small farmers are unaware of the program and will find it difficult to meet the deadline for spring planting, he added.

“I think only a few farmers, those who are involved with the council ... know about it because they (had) a meeting with the ministry and can order the plants,” Grewal said.

Raspberry council manager Lisa Craig says council members were told about the program at the Nov. 17 annual general meeting. Followup emails with links were sent after the official announcement from the agriculture ministry, she adds.

“We also continue to send out reminder emails periodically.”

The B.C. government recently announced funding to revitalize the raspberry industry, but growers say it won’t be enough to secure the future of raspberry farms. #foodsecurity

Availability of low-priced fruit from competing markets is a major concern for Canadian raspberry growers, who are struggling to compete with a robust import market.

Raspberry consumption in Canada is increasing every year, but the majority of the fruit being sold is imported.

Grewal says packers or wholesalers import raspberries from other countries like Chile, Mexico and Serbia and sell them in Canada.

“It’s packed in Canada and it’s shown in big letters. But that doesn’t mean it’s grown in Canada,” he said.

Bergen understands the challenges facing growers today. Revitalizing the local raspberry market will require a shift in mindset as well as in growing, processing and selling practices, he says. Growers, he adds, must be willing to explore new varieties of raspberries.

“There is a demand for both fresh and IQF raspberries from retail and customers,” he said, “and producing the right products that Canadian consumers want and can access easily is extremely important.”

Grewal also emphasizes the need for a good relationship between packers and growers.

“We first need to work on the markets and then build trust between packers and growers,” he said.

Craig says the council is trying to bridge this relationship by having a dedicated position on its board for a packer/processor representative.

Bergen and Grewal say the pandemic has presented local farmers with some sales opportunities. Demand for locally grown produce has been exceptionally high due to COVID-19. Consumers stocked up on frozen fruits during the initial lockdown period as many people used their increased time at home to eat healthier food and re-evaluate their eating habits. The increased demand resulted in higher IQF pricing, which will lead to increased returns to the growers, Bergen says.

“The main raspberry variety that is being grown in B.C. is an older variety, with many of these plantings (being) older plantings,” he said. Older plantings also tend to produce less fruit and have poorer fruit quality, he noted.

“This program could not come at a better time, as I am sure many growers are considering pulling out their older fields and deciding what to do with their land next,” he said.