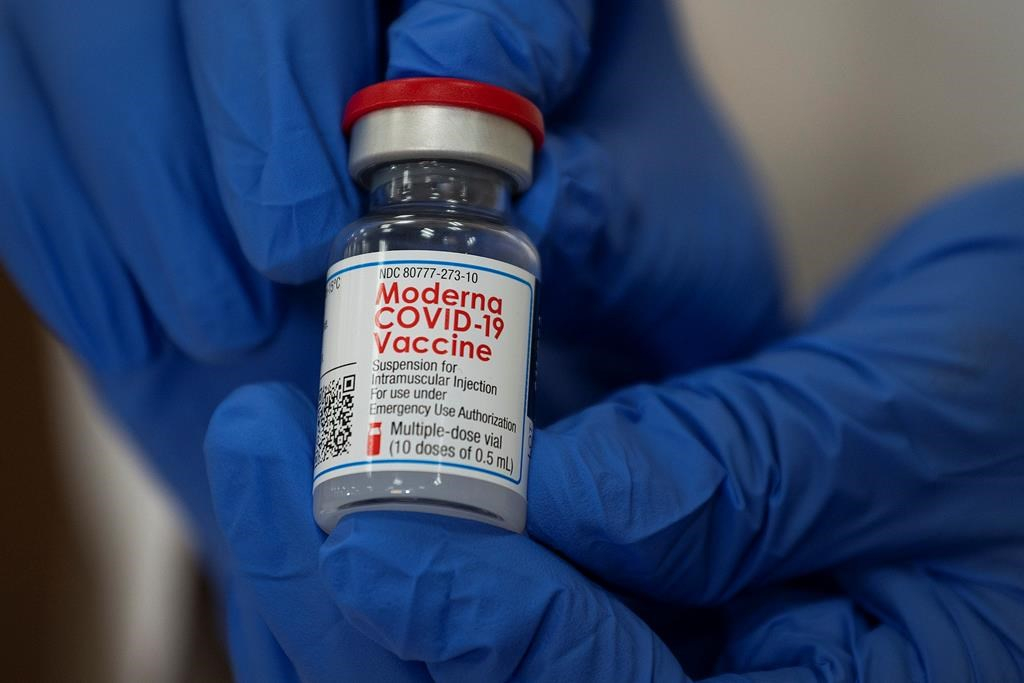 OTTAWA — Canadians received an early Christmas present on Wednesday as Health Canada declared a new COVID-19 vaccine from U.S. biotech firm Moderna safe for use, paving the way for a second inoculation to start arriving in the country in the coming days.

Prime Minister Justin Trudeau welcomed the move during a news conference in which he also announced that Canada will receive more doses next month of the Pfizer-BioNtech vaccine than previously expected, after it was approved by Health Canada on Dec. 9.

Between the early doses already in the country, and the shipments now scheduled, Canada should have at least 1.2 million doses from Pfizer and Moderna delivered by Jan. 31, Trudeau said outside his Ottawa home.

Yet it wasn’t all good news as the surge in new COVID-19 cases continued across much of the country, with Quebec reporting another new daily record. Quebec reported 2,247 new infections — one day after it posted 2,183 new cases, which was a record at the time.

Meanwhile, Ontario was preparing for a provincewide lockdown on Boxing Day.

Trudeau also announced Canada was extending a ban on flights from Britain for another two weeks to Jan. 6 as the United Kingdom struggles with a new strain of COVID-19 that experts suggest is more contagious than other variants.

The prime minister also committed another $70 million to help the Canadian Red Cross as it faces growing demand for help from long-term care facilities in Ontario and Quebec that have been overwhelmed by the pandemic.

“The Red Cross has done outstanding work over the last year to keep people safe,” Trudeau said. “As we deal with this second wave, we need their expertise more than ever.”

Hours before the prime minister addressed Canadians, Health Canada announced that it had approved the Moderna vaccine following rigorous testing, with up to 168,000 doses set to be delivered by the end of December.

"After assessing all the data, we concluded that there was strong evidence that showed the benefits of this vaccine outweigh the potential risks," Health Canada’s chief medical officer Dr. Supriya Sharma told a news conference in Ottawa.

Canada received an early Christmas present with Health Canada's approval of the Moderna vaccine, but COVID-19 cases are still surging across much of the country, with Quebec reporting another new daily record.

"Today’s authorization is one more tool in our toolbox to bring COVID-19 under control.”

While the Pfizer vaccine has already started to be distributed in different cities across Canada, Sharma indicated the Moderna inoculation will likely be distributed to more remote communities.

That is because it does not require the same level of extreme-cold storage as the Pfizer version.

"Since many Canadians live outside major urban areas, this vaccine can be used in communities that haven’t had access to COVID-19 vaccines to date," Sharma said.

The first doses are prioritized for front-line health staff, residents and workers in long-term care, adults in remote Indigenous communities and seniors over the age of 80 living in the community.

Yukon’s minister of health said Wednesday that immunization clinics will begin in the territory in the first week of January.

Pauline Frost described the Moderna approval as the "exciting news Yukoners have been waiting for."

She said delivery of 7,200 doses, expected by the end of this month, will be enough to allow 3,600 residents of the territory to receive the two doses needed to provide immunity against the virus.

Canada is to get 40 million doses of Moderna’s vaccine in 2021, enough to vaccinate 20 million people, or about two-thirds of the Canadian adult population.

The vaccine is not yet recommended for use on children as tests on adolescents only began in December and tests on children younger than 12 won’t begin until next year.

Moderna will have to continue to provide information to the regulator on the safety of the vaccine, Sharma said.

People with severe allergies have been advised against getting the Pfizer vaccine after several people in the United Kingdom had reactions to the inoculation. Sharma said the same advice is being given for the Moderna inoculation.

Canada’s doses of the Moderna vaccine are being made in Europe.

Two more vaccines are being reviewed by Health Canada, one from AstraZeneca and the other from Johnson and Johnson, Sharma said, but more information is needed before they can be approved.

This report by The Canadian Press was first published Dec. 23, 2020.

Health Canada has what it needs to decide on Moderna vaccine