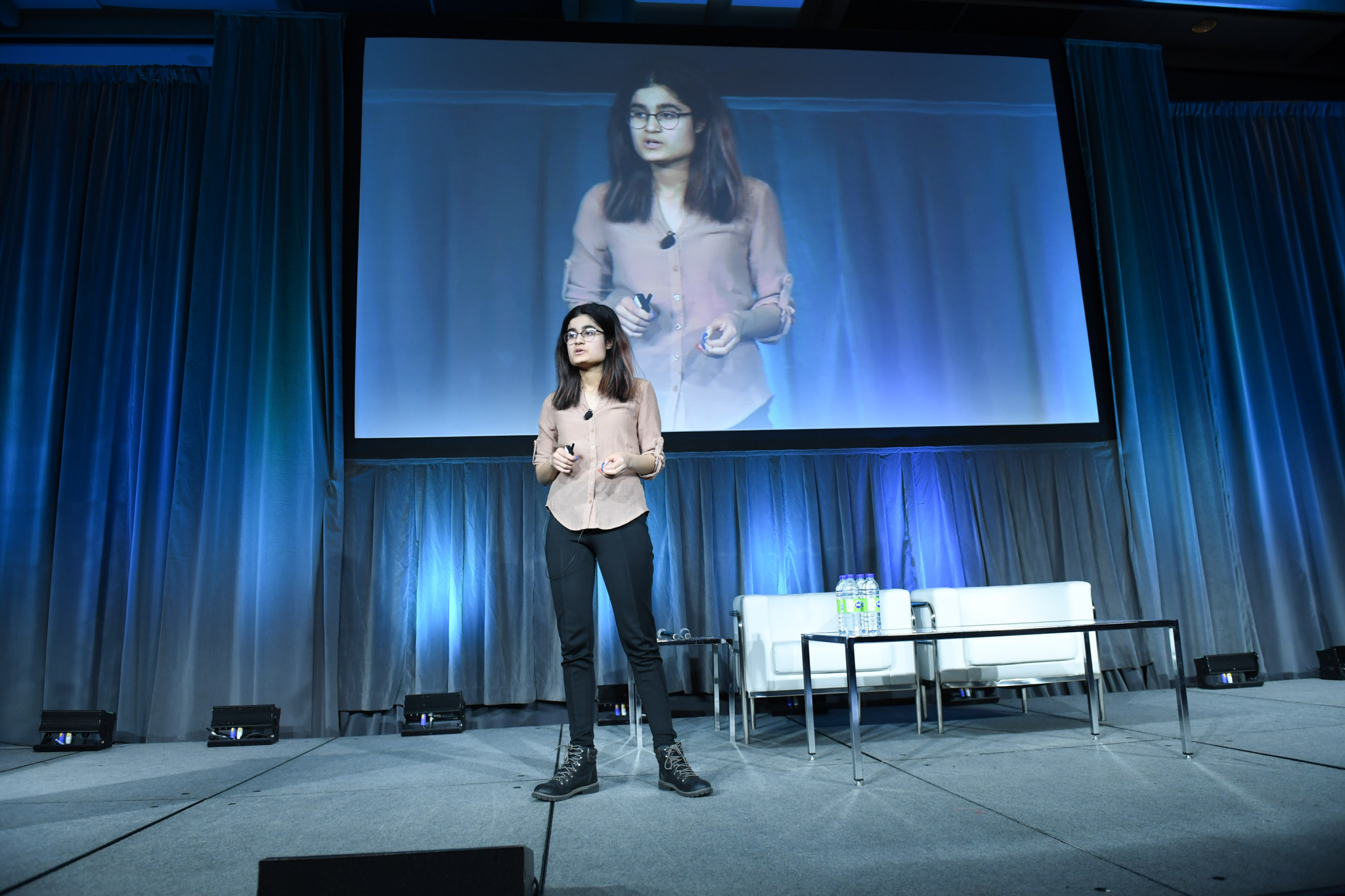 Alishba Imran speaks at a KPMG insurance conference in Toronto on Nov. 26, 2019. Photo by Brooke Stal
Previous story
Next story

Seventeen-year-old Alishba Imran is determined to use the tech skills she has honed over four years to develop a sophisticated, affordable prosthetic that could help millions of mostly poor amputees.

Imran, a machine learning and blockchain developer from Mississauga who was recently named a “young innovator to watch” at the Consumer Electronics Show, is using tiny cameras and advanced coding in an effort to develop 3D-printed prosthetic limbs with more accurate grasp manipulation.

“It’s really exciting,” Imran said in a phone interview with Canada’s National Observer. “For me, my goal, what gets me really excited, is trying to solve big problems that are not getting a lot of attention.”

At least 35 million people around the world are in need of prosthetics and orthotics, according to the World Health Organization, while nine out of 10 of those who need assistive products cannot access them due to high cost and a lack of awareness or availability.

And Imran’s work — assuming it moves from prototype to manufactured product — could mean shorter training times for patients at a much lower price and with increased precision of control, grasp and grip.

Imran has an admittedly optimistic goal of producing a piece of hardware that costs $500 and could replace or augment existing products, which can run from tens of thousands to hundreds of thousands of dollars. She plans to make the coding and design open source so any manufacturer could use them.

The teenager, who will graduate from Stephen Lewis Secondary School in Mississauga next June, has been working on the project with mentors from robotics companies Kindred.ai and Hong Kong-based Hanson Robotics, as well as a master’s student from San Jose State University (SJSU).

In recent months, Imran and her teammates have been working on integrating a camera into an improved four-sensor arm design, stress testing prospective materials for weight-bearing capacity and a coating for hygiene, conducting simulations on the design and collecting feedback from amputees and rehabilitation experts.

They’re currently printing about a dozen prosthetic arms they plan to test on a small group of patients associated with SJSU early next year, she said.

Mississauga high school student @alishbaimran_ is using her tech skills to develop a prosthetic limb that could help millions of people who struggle to afford the devices.

But while the technological advances sound promising, industry participants say there are many other factors to consider that complicate the promises of the possible $500 price tag.

There is the additional and ongoing cost of paying trained professionals to treat amputees, for example, and the liability risk of using cheaper, untested materials, said Dan Blocka, president and CEO of Boundless Biomechanical Bracing and an orthotist with decades of international work experience.

“It’s very easy to rhyme off such costs, and I have heard these statements by many organizations thinking they can go into countries with big needs and for the most part are unsuccessful because of how naive they are about a professional area they are ignorant of,” he said.

“The costs of printing high-standard devices will not bring huge cost savings,” he added.

Imran acknowledges that one of the main challenges of the project is finding a material that is durable, hygienic and cheap. Existing products tend to use aluminum and other costly materials, while existing 3D prosthetics using nylon don’t always last.

But she says the team plans to publish a paper of research findings by March, and if all goes well, she thinks it could be commercialized by next summer.