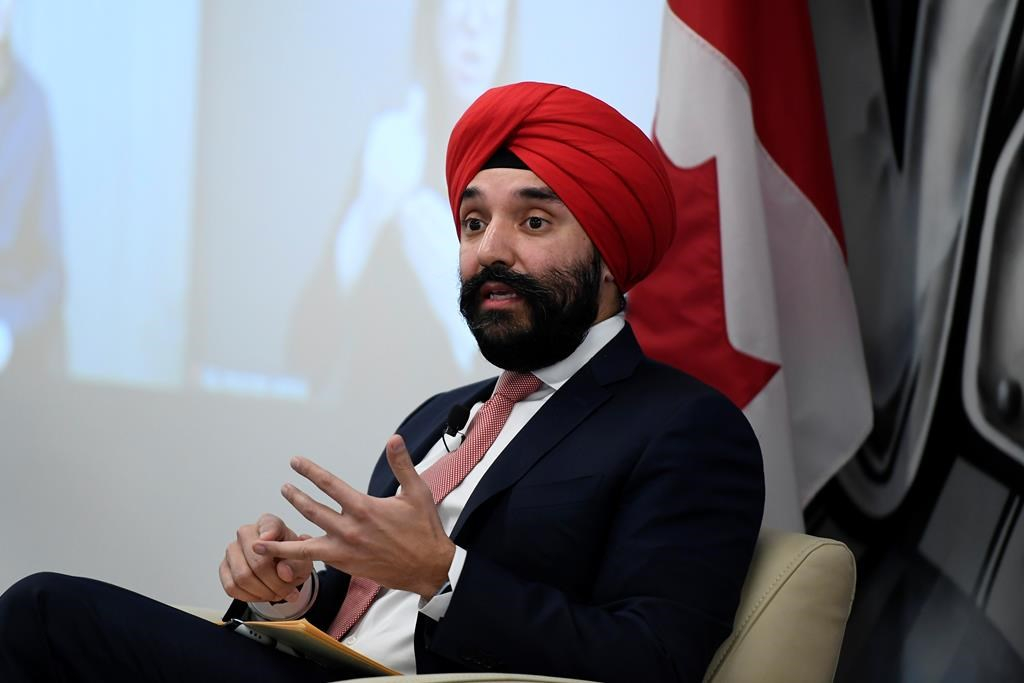 Navdeep Bains responds to a reporter's question on the government's decisions regarding domestic production of a COVID-19 vaccine, after the announcement of the 50 – 30 Challenge in Ottawa, on Dec. 10, 2020. File photo by The Canadian Press/Justin Tang
Previous story
Next story

Canada's industry minister says the country faces mounting mental health concerns that the government will have to address in 2021.

Navdeep Bains says he has heard more stories about the mental health of workers and entrepreneurs alongside needs for financial help to individuals and businesses.

He says it is particularly the case in his Toronto-area riding that is home to Pearson International Airport, where local hotels and restaurants are also suffering from a drop in travel.

Bains tells The Canadian Press that he has seen the issue in his own home.

A father of two, Bains says the pandemic has taken its toll on his school-aged daughters from not being able to engage with friends and family.

Research by Statistics Canada through the pandemic has noted a decline in self-perceived mental health.

A study by the agency published in June suggested those more affected by the pandemic — such as women, those with compromised immune systems or chronic health conditions — were less likely to report better mental health.

"I'm hearing more and more stories and frankly, personally, I can relate to that," Bains said of mental health concerns.

"It's an emerging issue not only in my riding — I suspect it's across the country as well. But it is clearly an issue that we have to deal with."

Another Statistics Canada study released just before Christmas noted Canadians' measurement of "life satisfaction" had dropped to its lowest level over two decades of comparable data.

Canada's industry minister says the country faces mounting #MentalHealth concerns that the government will have to address in 2021. #Covid19

The agency's studies were among several released this year about the mental health impacts from the economic and health crisis.

Federally, the government responded to the pandemic with unprecedented spending that pushed the deficit to $381.6 billion, although the government's math says it could close in on $400 billion depending on the length and breadth of restrictions and lockdowns.

For all that spending, Bains suggested there may be more that could be done to help sectors that don't cost money.

He noted the how companies have sped up plans to go digital as workers stayed home. That required what Bains described as a shift to focusing on "the plumbing" by updating legislative and market frameworks around privacy laws.

He also announced the "50-30 challenge" just before the end of 2020 that asks organizations to have 50 per cent of women on boards and in senior management.

The federal program also calls for 30 per cent of those positions to be filled by "under-represented groups" like racialized people, those living with disabilities and Indigenous people.

Companies that show they have met the goal would land preferential access to federal programs, and potentially federal contracts.

"If you've done that, then I firmly believe … you will get better access to, you will be treated favourably when it comes to grants and contributions," Bains said, "and ultimately, if we want to proceed, procurement as well."

Bains argued the government's pandemic response overall should help in another looming battle: That for top talent.

Although Macklem warned that advantage could disappear when Joe Biden is sworn in as president, Bains said the country's overall response to the pandemic could act as a counterpunch.

"There's no doubt that there was this contrast between the politics and the policies of the U.S. in the past and what we were doing in Canada," Bains said.

"But it's important to note that our brand and our policies are stronger than ever."