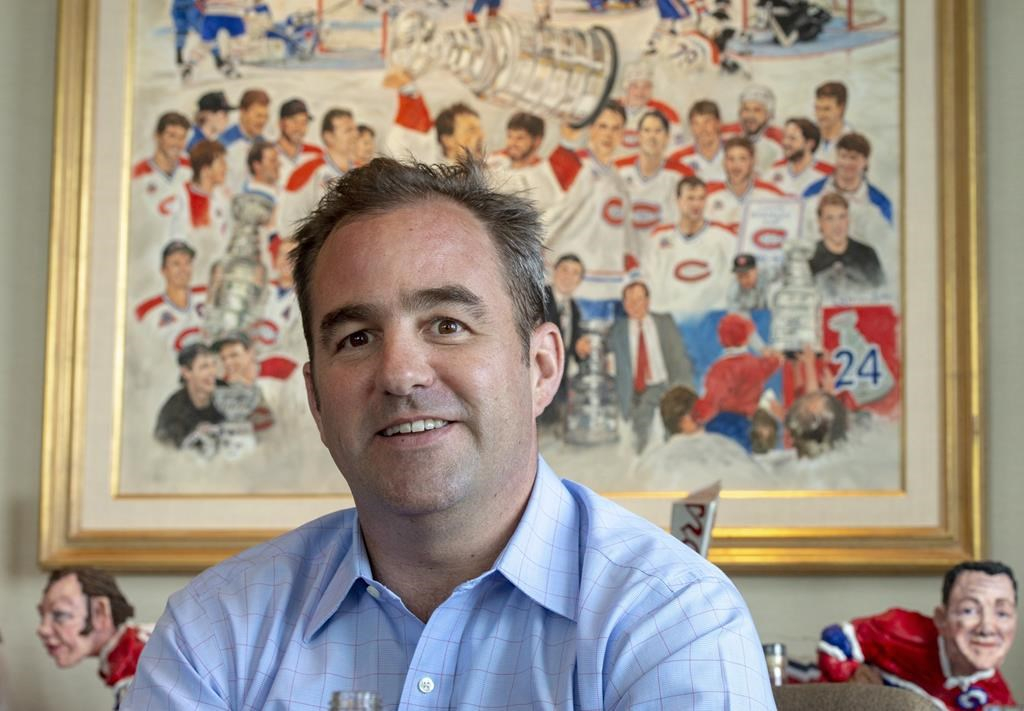 Montreal Canadiens owner Geoff Molson is seen in his office at the Bell Centre in Montreal on Tuesday, June 11, 2019. File photo by The Canadian Press/Ryan Remiorz
Previous story
Next story

It was near the end of June that Dr. Vivek Goel decided to give up his job as vice-president research at the University of Toronto to make whatever contribution he could as a public health physician.

The founding president and CEO of Public Health Ontario, created after the SARS outbreak in 2003, has since advised the university's president on COVID-19 and served on the federal immunity task force.

In a year marked by COVID-19, where public health professionals were front-and-centre, it seems fitting that Goel would be among the 59 additions to the Order of Canada.

Each join one of the nation's highest honours that since 1967 has added more than 7,000 names.

Among the names made public Wednesday by Rideau Hall are science journalist Yanick Villedieu; opera singer Daniel Taylor; philanthropist Sally Horsfall Eaton; Louise Mailhot, who was the first woman appointed as a judge to the Quebec Court of Appeal; and John Borrows, who holds the Canada Research Chair in Indigenous Law at the University of Victoria.

Elder Carolyn King from the Mississaugas of the Credit First Nation has likened the Order of Canada to the eagle feather she received from her community.

Now, she joked, she has both honours with Rideau Hall noting her years of efforts to educate the non-Indigenous population about Indigenous culture, issues and history.

Her latest effort is The Moccasin Identifier project aimed at helping students learn about and mark culturally significant Indigenous sites and traditional territories.

"That's how we change the world," King said.

Dr. Jacalyn Duffin received an appointment for her work as a medical historian. From the late 1980s until her retirement from Queen's University in Kingston, Ont., three years ago, she was a history professor and practicing doctor.

Now she is updating her history textbook, including the portion on pandemics that explains how COVID-19 follows a narrative structure similar to past episodes, as well as a book solely on COVID-19.

"It's very hard to be writing a history of what is today the future a month or two away," Duffin said. "But that concept of the structure of an epidemic is in my mind and it's helping guide me as I write."

The narrative of the COVID-19 pandemic is well known since the first lockdowns in March, impacting the bottom line of businesses, charities and non-profits.

Restrictions have loosened and tightened since, requiring major philanthropic organizations to adapt to support organizations that were retooling in the face of COVID-19.

"Canada was was hunkering down and bracing ourselves with what was before us and institutions like our family foundation had to be there," said Andrew Molson, who heads the the Molson Foundation.

"We were flexible and open-minded about what the institutions that we support were going to do during these really tough times."

Andrew is one of two Molsons being appointed to the Order of Canada for their community work. The other is his brother Geoff Molson, CEO of the Montreal Canadiens.

"We have a big responsibility to maintain an important name in the country and that could be through business, community, or society in general," Geoff Molson said. "As long as we continue to do that, the name will remain important in our country."

Meanwhile, scientists from around the globe raced to develop a vaccine, the first doses of which being administered in Canada in recent days.

The breakneck speed of development caught Helen Burt by surprise.

Burt has spent 40 years as a pharmaceutical scientist, looking for ways to better deliver life-saving drugs. Her research is somewhat related to the technology behind the delivery of the COVID-19 vaccine.

Key to the delivery of the vaccines approved for use in Canada is protecting their genetic material known as messenger ribonucleic acid, or mRNA, that trains the body to develop antibodies to SARS-CoV-2, the virus that causes COVID-19.

Burt called the speedy development of the vaccine an attestation to science and scientists.

"It really has been such an incredible year to have been a pharmaceutical scientist to just have seen what can be accomplished when such a global machine takes off," she said.

But the pandemic isn't over.

And what happens next is of interest to Goel.

After the pandemic is firmly in the rear-view mirror, Goel said he's concerned the country will forget about the importance of public health agencies who may see budgets cut as as governments hit deficit-reduction mode.

"What I really hope for is that as we come out of this, public health will not become invisible again," he said.