By Holly McKenzie-Sutter | News, Politics | January 1st 2021
#1082 of 1611 articles from the Special Report: Coronavirus in Canada 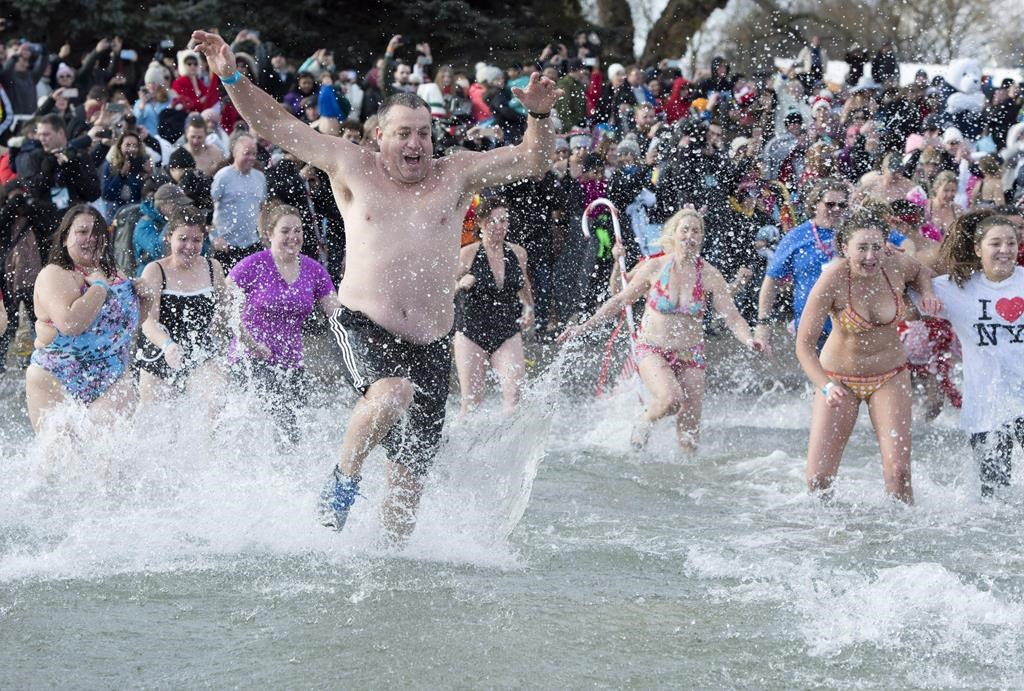 Crowds are discouraged from gathering as people plunge into icy Canadian waters to ring in 2021, but the pandemic hasn’t frozen the charitable spirit behind the annual events.

Organizers of “polar swims” across the country are inviting people to participate in COVID-friendly dips with backyard adaptations or physically distanced events.

Keith Jolie said it’s disappointing that the usual crowd of more than 400 swimmers – and even more spectators – can’t gather on Toronto’s Sunnyside Beach this year.

But Toronto Polar Bear Club is encouraging people to share videos of their own jaunts to the nearest body of water – be it Lake Ontario or an ice-filled tub – along with a donation to Boost For Kids, a local child advocacy charity.

“This is a tough year for charities,” Jolie said Thursday in a telephone interview. “We really wanted to continue to support them.”

Jolie and his fellow organizers uploaded video to Facebook in early December of their own three-person dip at Sunnyside Beach to offer inspiration.

Most participants plan to hold their own swims on Jan. 1 for tradition’s sake, but Jolie said a few videos had started to roll in by New Year’s Eve, with people taking ice baths, hitting the lake in small groups or swimming near their cottages.

“It’s been pretty neat to see,” Jolie said in a phone interview on New Year’s Eve. “We're looking forward to seeing what people's creativity does.”

Courage Polar Bear Dip – which boasts being the largest such event in Canada by crowd size and donations – usually draws 800 swimmers and thousands of spectators to the shores of Lake Ontario in Oakville, Ont., according to organizer Jenna Courage.

The event is going ahead this year with a livestream of participants’ submissions starting at 11:30 a.m. and a costume contest later in the day. People are encouraged to record themselves taking the plunge by rolling in the snow or dipping into a blow-up pool like the Courage family, who founded the event in 1985, did this year.

“Anything cold that can be done safely at home with your family counts,” said Courage.

She said it’s an opportunity for people intimidated by crowds to get into the spirit of the dip for the first time and show support for World Vision Canada, the swim’s charity partner.

Brave swimmers are invited to dash in and out of the frigid North Atlantic at Chapel’s Cove beach in Conception Bay, about 40 minutes from the provincial capital of St. John’s, N.L.

The pandemic is not as widespread in Newfoundland and Labrador, with just 20 active cases as of Dec. 31, but organizer Robert Myers said there won’t be the usual gatherings to warm up before and after the annual event.

“When people dip, they'll have to immediately go back to their vehicles,” Myers said by phone.

"It'll still be a fun day, but it'll be a little bit lessened this year with celebrations and things like that."

Between 15 and 30 people usually turn up for the event. Myers said he’s not sure of this year’s numbers, but by early on New Year's Eve, the event had already blown past its fundraising goal of $2,000 for the Canadian Mental Health Association’s Newfoundland and Labrador division.

Myers, who is a school guidance counselor, said mental health is an important cause that’s impacted even more lives over the past year, as people have grappled with challenges like isolation and financial hardship during the pandemic.

“It’s always relevant, but even more so this year,” Myers said.