Feds told not to expect easy road to recovery 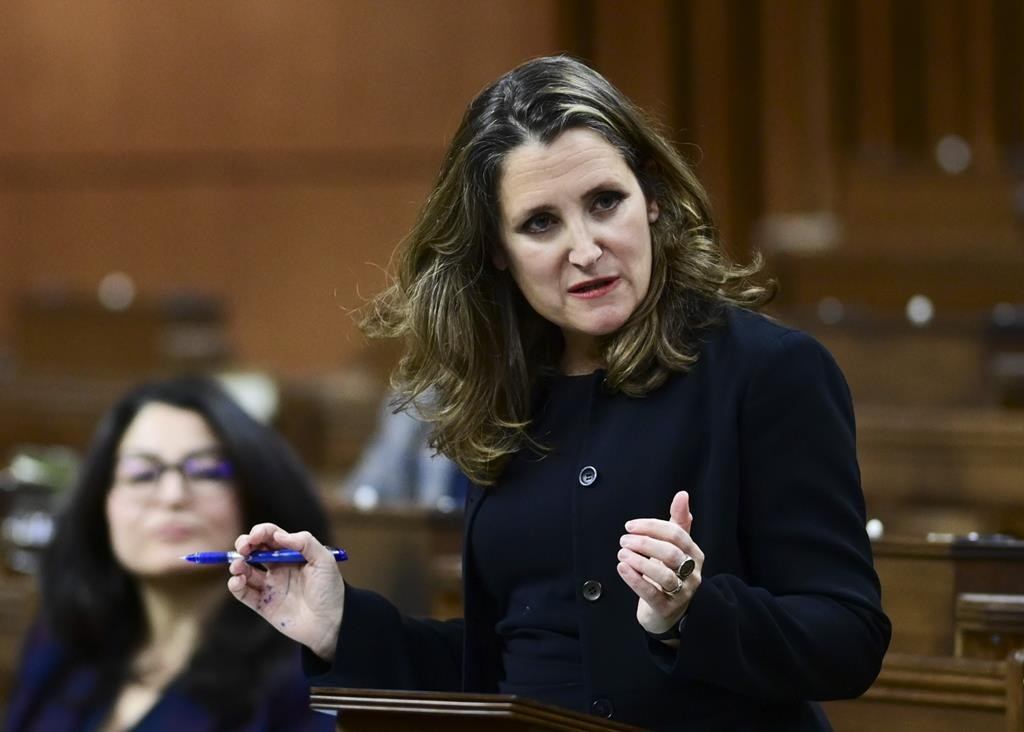 Minister of Finance Chrystia Freeland resends to a question after delivering the 2020 fiscal update in the House of Commons on Parliament Hill in Ottawa on Monday, Nov. 30, 2020. File photo by The Canadian Press/Sean Kilpatrick
Previous story
Next story

Officials believed in late summer that an economic recovery would not magically happen if lockdowns and public health restrictions disappeared, a newly obtained federal document shows.

The internal briefing note says a key to recovery is the level of trust people have in their government's ability to contain the spread of COVID-19.

The Canadian Press used the Access to Information Act to obtain the Finance Department briefing note, prepared in early September.

While restrictions and lockdowns are common ways to reduce transmission of the novel coronavirus, the note also lays out other options, including increased testing and contact-tracing.

It says countries that have managed to reduce transmission of the virus to very low levels have seen more people visit retailers, use transit and head to workplaces.

Countries that haven't kept COVID-19 under control, including where restrictions have been loose or non-existent, "have had a much more uneven recovery."

"Lifting restrictions is not sufficient for a full economic recovery," the briefing note reads, adding that "evidence has shown that to unleash demand, it is critical that individuals also feel safe and confident in the ability of their government to contain the virus."

The words in the briefing document echo much of what the government heard over the fall, and more recently after the Liberals pledged to spend up to $100 billion if necessary on an economic recovery plan.

“Restoring public confidence in the economy requires systematic, widespread and rapid testing and contact tracing – something we have been calling for since the spring," said Robert Asselin, senior vice-president for policy at the Business Council of Canada.

"Nine months into this crisis, it is still not in place in most of the country. The patchwork approach to testing and tracing has been inefficient and very costly from both a health and economic standpoint.”

Nearing the end of the year, Canada had recouped just over four-fifths of the three million jobs lost in the spring, and real gross domestic product was about four per cent below pre-pandemic levels after posting a historic decline in the second quarter.

Aiding in that rebound were low levels of COVID-19 transmission, which suggests "Canada has managed to balance both the health and economic risks related to the pandemic relatively well," the briefing note says.

"Nevertheless, the experience of other countries that have witnessed resurgent or second waves of infection suggest that health risks will remain a threat as we move into the fall and further along the economic recovery path."

Canada's economy ticked along even as case numbers grew, providing what experts say is an inkling of hope for 2021 despite the imposition of fresh restrictions in parts of the country.

The restrictions have hit some sectors harder than others. The briefing note foreshadowed how provinces and municipalities may have to more readily close or limit hours for some businesses, such as restaurants and bars, "and will need to be equipped to rapidly identify and trace outbreaks."

The briefing note also says efficient contact-tracing "goes hand-in-hand" with testing to reduce transmission. By the time the briefing note was written, testing had hit about 48,000 per day in Canada, or abut 0.13 per cent of the population, as of the end of August.

"Evidence varies on the appropriate level of testing, but increased capacity and more rapidly available testing would be an important asset to the economic recovery in the fall," officials wrote.

Trevin Stratton, chief economist at the Canadian Chamber of Commerce, said the country needs to start using more rapid tests to get ahead of COVID-19 while officials work to roll out vaccines.

"By knowing who has been recently exposed to the virus, in many cases even when people are infected but asymptomatic, we can contain its spread through accurately targeted responses," he said.

"This approach will limit the need for blanket response measures like lockdowns, which cause serious collateral damage."

Ranks of long-term unemployed swell even as economy added 84,000 jobs in October