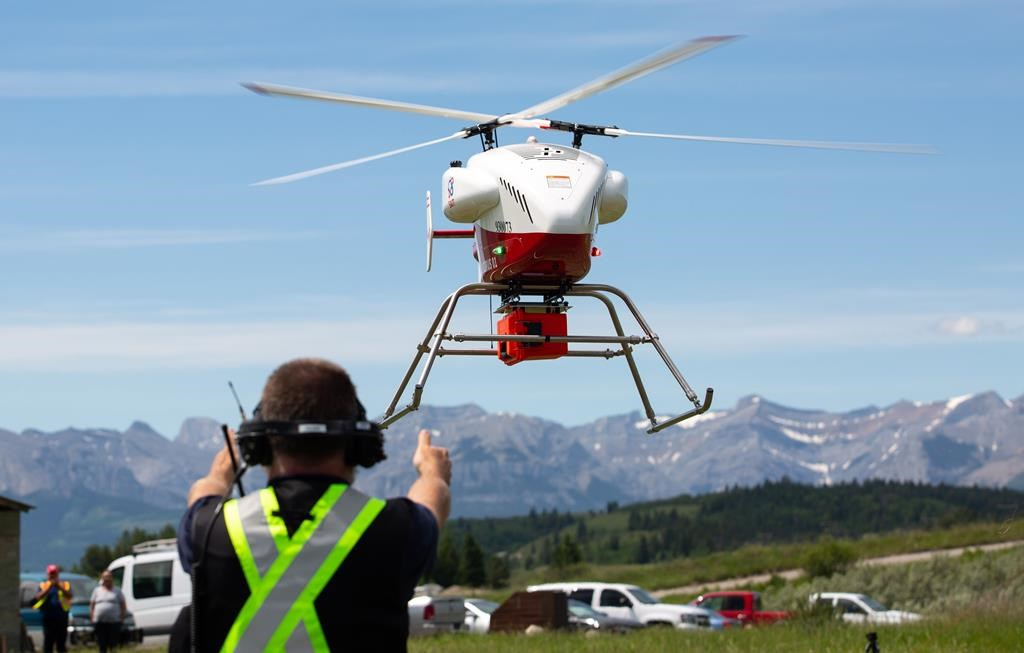 The windswept foothills of Alberta's Rocky Mountains are the setting for a pilot project using drones to deliver medical supplies and personal protective equipment to remote communities.

Researchers at the University of Calgary, Southern Alberta Institute of Technology (SAIT), Alberta Health Services and Alberta Precision Laboratories partnered with the three reserves that are part of the Stoney Nakoda First Nation last summer.

A large drone, looking very much like a small helicopter and able to carry up to 45 kilograms, delivered equipment and COVID-19 test kits on its maiden voyage to the Morley reserve west of Calgary.

"We think that the sky is the limit, literally, for this type of technology, marrying drones with ... medical supply delivery," Conly said.

"We're just priming ourselves for what could be a great delivery service.

"My vision is we create a drone army that would be supplemental to the medical care that we deliver."

Eden Valley, southwest of Calgary, will provide challenges due to distance and strong winds. Big Horn, in central Alberta, is even farther away and the terrain is more rugged and cell service more spotty.

"Our goal is to prove this technology locally and then we'll move that Canada-wide potentially — to northern territories with truly remote environments — and then developing countries."

Hawkins said the Alberta tests are to wrap up by next summer and the idea is drawing international attention.

The windswept foothills of Alberta's Rocky Mountains are the setting for a pilot project using drones to deliver medical supplies and personal protective equipment to remote communities.#Covid19 #PPE

"We've even had interest from the World Health Organization (WHO). They're actually a funder now and they're interested in seeing what we can do," he said.

"They're interested in some of the countries in Africa, primarily for delivery of medical supplies, but also COVID testing ... (and) delivery of mobile medical equipment."

Conly, who has been a senior technical adviser with the WHO's COVID-19 response program, said the agency sees the potential.

"They were quite intrigued about the issue for vaccine delivery. They would be able to load up and deliver vaccine to remote villages for self-inoculation."

The project is also testing smaller drones to send medical equipment, such as portable ultrasound devices, directly to patients, so a doctor could do remote examinations.

"If it's immediately life-threatening, you can act on it. Time is everything in emergency medicine."

The CEO of the Stoney Nakoda said the First Nation is thrilled to be on the ground floor of testing new technology.

Ryan Robb said Morley is next to the Trans-Canada Highway, but the other reserves are more isolated. So drones could prove valuable in providing better health care.

"We could see this being used to deliver medicine. We still have many people on our reserve where I can't drive to their house unless I'm in a four-wheel drive," Robb said.

"We would like to be cutting edge, too. These aren't the same drones your kids are playing with."

Dr. Aurang Khan with Stoney Health Services said the use of drones is essential for remote communities, especially to test for COVID-19.

"Having this technology to be able to deliver personal protective equipment and swabs and testing kits to the health centre ... is really going to improve the outcome for our community members in terms of health," he said.

"We can easily summon the drone and have all the swabs loaded on to it and sent to the provincial lab at Foothills Hospital (in Calgary) and we'll get the results in a very short time."

This report by The Canadian Press was first published Jan. 2, 2021