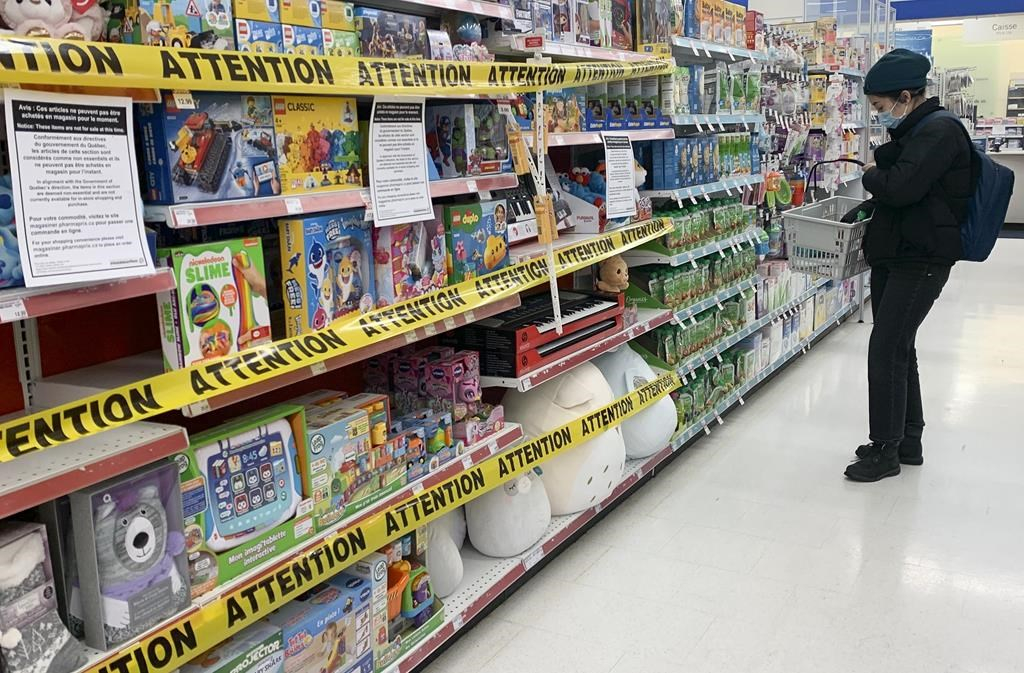 Tape is shown on shelves preventing the sale of certain products at a pharmacy in Montreal, on Sunday, January 3, 2021, as the COVID-19 pandemic continues in Canada and around the world. Photo by The Canadian Press/Graham Hughes
Previous story
Next story

The federal Liberal government mulled the possibility of barring Canadians who travelled abroad from receiving a sick leave benefit aimed at those who must quarantine due to COVID-19 on Sunday amid fresh admissions of foreign excursions from a growing list of politicians and a national case count that surpassed 600,000.

The Canada Recovery sickness benefit was launched in the fall to help Canadians who are unable to work because they must quarantine during the pandemic. It pays $500 per week to a maximum of two weeks.

But Employment Minister Carla Qualtrough said the government is “actively looking at all options” in the face of questions over whether Canadians who have travelled abroad should be allowed to collect the money.

Controversy over the issue mounted on Sunday as two members of the federal Liberal caucus stepped down from their parliamentary duties after disclosing trips abroad over the holiday period, joining a slew of provincial legislators who also flouted widespread public health advice to stay home as COVID cases skyrocketed.

It took just over two weeks to add 100,000 diagnoses to the national tally; the country reached the 500,000 case milestone on Dec. 19, before many of the jet-setting politicians left the country.

Qualtrough said globetrotters were never intended as the recipients of the federal sick benefit.

It's designed “to provide workers with a paid sick-leave option where one might not be available through their employer, so that workers did not have to choose between going to work and putting food on the table,” Qualtrough said in a statement.

“The Canada Recovery Sickness Benefit was never intended to incentivize or encourage Canadians to not follow public health or international travel guidelines. ... We are actively looking at all available options to address this issue.”

Questions about the sick-leave benefit were first raised over the weekend by Bloc Québécois Leader Yves-Francois Blanchet, who said it was “absurd in most cases” that anyone able to leave the country would need government support to quarantine.

NDP Leader Jagmeet Singh, whose party pushed the Liberals to create the benefit, welcomed the government’s review, saying Canadians were “rightly upset those who can afford to go on a vacation could get $1,000 to stay home when they come back.”

Yet he also warned Canadians would continue to leave the country as long as non-essential travel was allowed.

The emerging debate over the sick-leave benefits comes as Canadians have been buffeted over the past week with revelations that some politicians have ignored their own government’s advice and taken non-essential trips abroad.

Those trips have come even as millions of Canadians face government-imposed lockdowns across the country aimed at curbing the second wave of COVID-19 infections, which included thousands of newly reported cases on Sunday to take the national total over the 600,000 threshold.

That includes nearly 3,000 new positive tests in Ontario over the past 24 hours and more than 7,600 new cases in Quebec since Thursday, with hundreds of people hospitalized in both provinces.

In a rare bit of good news, however, Nunavut reported that the territory has no known cases as all 265 residents who have previously tested positive are now recovered. The territory has logged one virus-related death over the course of the pandemic.

The list of politicians known to have travelled outside the country in recent weeks grew on Sunday as the federal Liberals revealed that two of their MPs had visited the U.S. in late December.

In a separate statement posted to social media, Khera said she travelled to Seattle to attend a memorial for her late uncle, who died at the end of September.

“Although the purpose of my travel is deemed essential given the circumstances,” she wrote, “I have decided to step aside from my duties ... in an effort to ensure my choices do not distract from the important work of our government to continue battling this pandemic.”

Holland said Zuberi was also stepping down from his role on several House of Commons committees.

Three other Liberal MPs travelled outside the country between July and September, but Holland said he was informed of the trips at the time and there was no indication that they would face any ramifications.

Prime Minister Justin Trudeau's spokesman Alex Wellstead said Foreign Affairs Minister Francois-Philippe Champagne is the only minister to have travelled outside Canada since March, noting all three trips were for government business.

Questions about politicians' travel plans first surfaced last week when it was revealed that former Ontario finance minister Rod Phillips had taken a holiday to the Caribbean. He resigned from the role on New Year's Eve shortly after his return to Canada.

At least five Alberta legislators also left Canada over the holidays, though Premier Jason Kenney has declined to punish them.

The federal NDP stripped Manitoba MP Niki Ashton of her duties as the party’s transport critic and deputy critic for women and gender equality after she travelled to Greece last month. Ashton said she left to be with her ailing grandmother.

The NDP said Ashton is the only caucus member to have travelled outside the country since March, while no one in the office of party leader Jagmeet Singh or the party’s research bureau has left Canada.

Bloc Québécois Whip Claude DeBellefeuille also reported that none of her party’s MPs had left Canada since the onset of the pandemic, saying in a statement in French that she had issued a directive prohibiting international travel.

Conservative Leader Erin O’Toole’s office did not directly respond to a question on Sunday over which MPs and staff had travelled outside of Canada since the beginning of December.

Feds told not to expect easy road to recovery