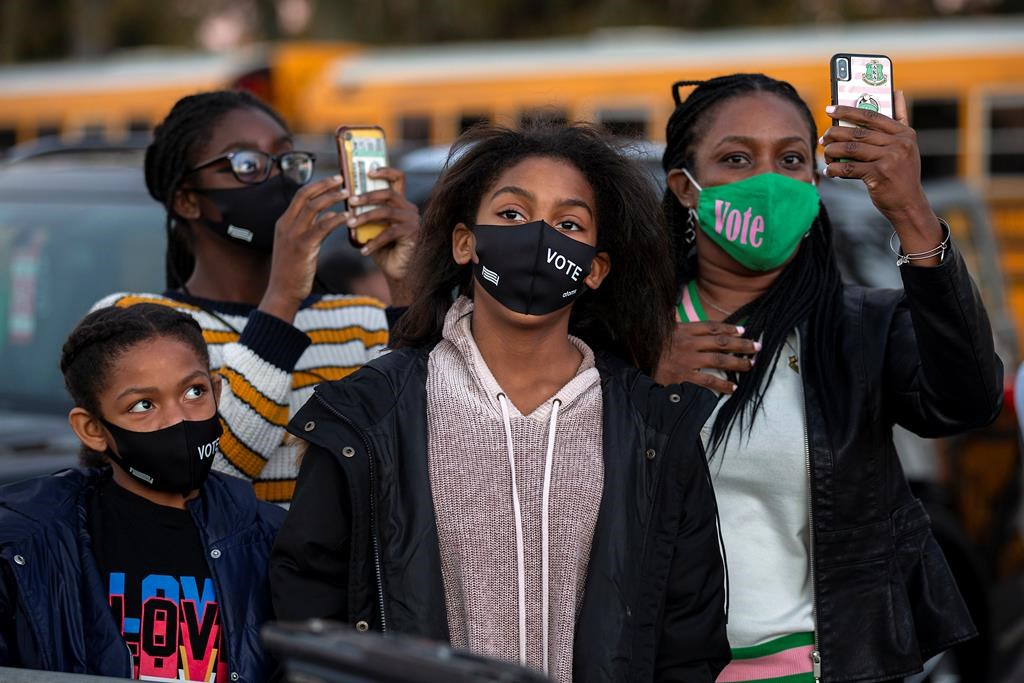 WASHINGTON, D.C. — Voters in Georgia will head to the polls Tuesday to determine who holds the balance of power on Capitol Hill for the next two years, the opening act in what promises to be an explosive week in U.S. politics.

That has profound consequences for president−elect Joe Biden: should both Ossoff and Warnock prevail, vice president−elect Kamala Harris would wield the deciding vote, giving Democrats control of the legislative branch.

But what was to be the main event of the 2021 electoral calendar was upstaged over the weekend, first by a faction of U.S. senators vowing to support Donald Trump’s unfounded bid to subvert the presidential election, then by Trump himself.

"I just want to find 11,780 votes," the president said Saturday in an explosive phone call in which he pressures, cajoles and even threatens Georgia Secretary of State Brad Raffensperger in hopes of overturning Biden’s 11,779−vote victory there.

"The people of Georgia are angry, the people of the country are angry … there’s nothing wrong with saying, you know, that you’ve recalculated."

Responded Raffensperger, a fellow Republican whose office recorded the call: "Well, Mr. President, the challenge that you have is, the data you have is wrong."

The revelations, first reported Sunday by the Washington Post, left political experts in Georgia slack−jawed — no small feat in a country that has weathered four years of the most tumultuous president in U.S. history.

"It’s the president of the United States breaking Georgia law," said Prof. Charles Bullock, a political science expert at the University of Georgia in Athens.

"Richard Nixon was our first criminal president, but at least he wasn’t trying to steal an election, which really goes more to the heart of democracy."

Both the incoming and outgoing commanders−in−chief were scheduled to campaign for their respective sides Monday in Georgia, although Trump’s event — billed as a "victory rally" — was widely expected to be more grievance−venting than glad−handing.

That, combined with the all−caps headlines surrounding the Saturday phone call, could do more harm than good to Republican aspirations, Bullock said — despite the fact that Trump can do no wrong among his supporters.

"All the evidence is that the Democratic and Republican candidates are very evenly matched at this point," he said.

"If the president’s recent behaviour were to turn off even a fairly small proportion of Republican voters, that could prove consequential if we see a situation like we did in the presidential election, where it was decided by fewer than 12,000 votes."

Paradoxically, Trump himself suggested Republicans in Georgia might stay home Tuesday — but because of Raffensperger, not him.

"The people of Georgia know that this was a scam — and because of what you’ve done to the president, a lot of people aren’t going out to vote," he said during Saturday’s call.

"A lot of Republicans are going to vote negative because they hate what you did to the president."

Many of Trump’s supporters are expected to express fealty to the president when they descend on the national capital Wednesday, when Congress is scheduled to meet to formally certify the electoral college vote and hand the presidency to Biden.

A dozen Republican senators, led by Texas Sen. Ted Cruz, say they intend to object to certification and demand an emergency audit of the results — an effort that is certain to accomplish little beyond delaying the vote until late Wednesday or early Thursday.

Instead, Wednesday’s wild card will be what happens on the streets of Washington.

Twice since Biden was declared the winner of the presidential election, thousands of Trump supporters from across the country, their ranks buttressed by the white−supremacist Proud Boys, have flooded D.C.’s streets in protest.

On both occasions, violent clashes have ensued between Trump backers and the various counter−protest groups that emerged to confront them, a loose coalition of Biden supporters, Black Lives Matter protesters and Antifa loyalists.

“I am asking Washingtonians and those who live in the region to stay out of the downtown area on Tuesday and Wednesday and not to engage with demonstrators who come to our city seeking confrontation," Bowser said in a statement.

"We will do what we must to ensure all who attend remain peaceful."

Trump has reportedly floated the idea of imposing martial law to overturn the election results, reports the president has denied. But clearly, members of the Washington establishment are taking nothing for granted.

A stark opinion piece in Sunday’s Post — co−authored by all 10 of the country’s living former secretaries of defense, Republican and Democrat alike — did little to ease the sense of foreboding.

"Efforts to involve the U.S. armed forces in resolving election disputes would take us into dangerous, unlawful and unconstitutional territory," they wrote.

"Civilian and military officials who direct or carry out such measures would be accountable, including potentially facing criminal penalties, for the grave consequences of their actions on our republic."

The Biden era is on the horizon — but that doesn't mean Canada-U.S. relations are back to normal

We asked Michael de Adder to sum up 2020