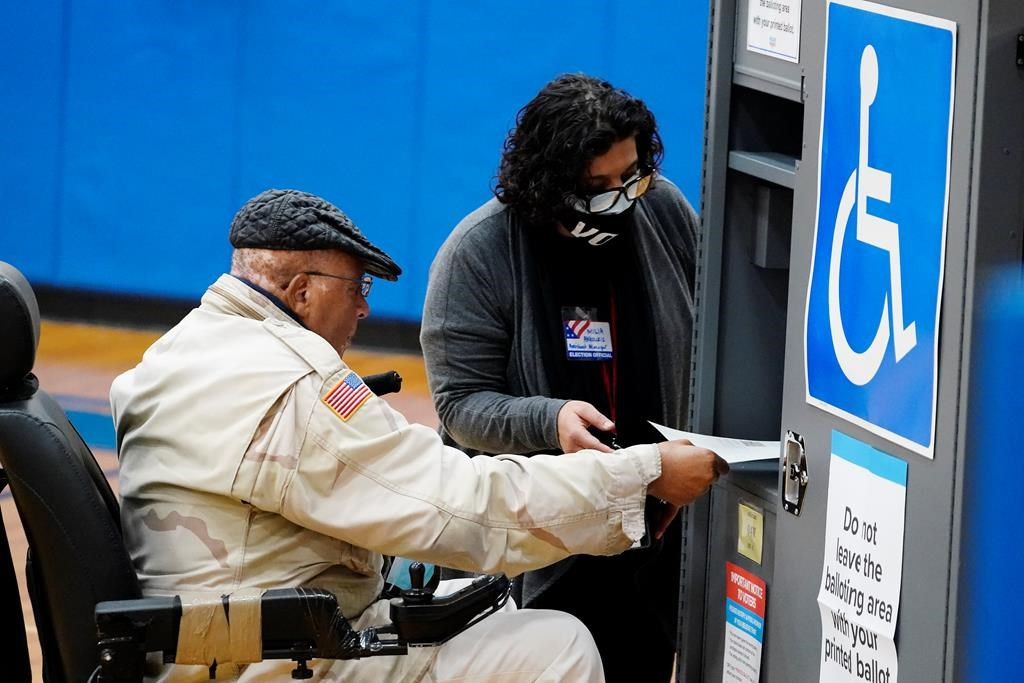 A voter casts his ballot in Georgia's Senate run-off election on Tuesday, Jan. 5, 2021, in Atlanta. Photo by The Associated Press/Brynn Anderson
Previous story

The battle for control of Capitol Hill came down to the wire Tuesday as a late surge of votes from Atlanta's suburban outskirts put Democrats within shouting distance of the two remaining seats in the U.S. Senate.

Early voting in Georgia's two runoff elections shattered records, thanks in large part to the COVID-19 pandemic curtailing public appetites for voting in person and the unprecedented fever that marks U.S. politics in the age of Donald Trump.

But as the night progressed, those margins disappeared entirely, with Perdue gradually edging ahead of Ossoff by only a few percentage points and Loeffler and Warnock quarrelling over the lead by a margin of fewer than 20,000 votes.

It wasn't until laggard counties in the vote-rich Democratic strongholds surrounding Atlanta finally began reporting the bulk of their returns that Warnock pulled ahead and Ossoff narrowed Perdue's lead to a relative handful of ballots.

Before the networks had a chance to call Warnock's race, however, the Baptist preacher from Atlanta appeared on a video stream on Twitter to claim victory as Georgia's first Black senator.

"I am going to the Senate to work for all of Georgia," Warnock said.

Loeffler, for her part, did not immediately concede the race, insisting she could still see a path to victory.

The sudden surge of Democrat votes echoed November's protracted presidential drama, prompting a conspiratorial tweet late Tuesday from Trump, who has continued to make unfounded claims that his second term was stolen.

"Looks like they are setting up a big 'voter dump' against the Republican candidates," the president wrote. "Waiting to see how many votes they need?"

Nearly 3.1 million people cast early ballots — 40 per cent of the state's registered voters and three-quarters of the total turnout from November — in a pair of races that lived up to their billing as long, drawn-out affairs.

But the week's drama was far from over.

The election took place on the eve of a historic day in Washington, where Congress was to gather Wednesday to certify Joe Biden as president-elect, with legions of Trump supporters flooding D.C. streets in protest.

A Democrat sweep would provide a key prize: control of the legislative branch, and with it a smoother path for a presidential agenda that includes health-care reforms, a higher minimum wage and buttressing stimulus efforts in the face of the pandemic.

Georgia, once a reliable Republican stronghold, is not the same place it was even a generation ago, said Charles Bullock, a political-science professor at the University of Georgia in Athens.

"The Black population in Georgia has also increased gradually. And what is taking place even more recently is that there have been increased numbers of each of these minority groups that are registering and are voting."

Though it was by fewer than 12,000 votes, Biden carried the state in November's presidential vote — the first Democratic nominee to do so since Bill Clinton in 1992 and the state's former governor Jimmy Carter in 1980.

Twin Democratic victories in Georgia could add to the tension Wednesday in downtown Washington, where Trump supporters were already gathering in anticipation of a day of protest in the national capital.

They plan to flood the downtown streets surrounding Capitol Hill as U.S. lawmakers meet to certify the results of the presidential election — a process a number of Republican members of Congress have already vowed to oppose.

Emotions briefly boiled over late Tuesday as one flag-waving faction clashed with police outside Black Lives Matter Plaza, the street outside the White House that bore witness to last year's long, hot summer of social unrest.

Perdue, the Republican incumbent whose first cousin Sonny is a former Georgia governor and Trump's secretary of agriculture, is an ardent Trump backer who was bumped from the campaign trail last week after being exposed to COVID-19.

Loeffler, a former financial-services CEO and co-owner of Atlanta's WNBA franchise, was appointed to the seat in 2019 to succeed Sen. Johnny Isakson, who retired at the end of the year for health reasons.

As an outspoken champion of progressive values like access to abortion, gay rights, Black Lives Matter and denouncing white privilege, Warnock has been a logical target for Republicans hoping to portray him as a poster boy for the "radical left."

"It's a choice," Loeffler said on Fox News Sunday about the decision voters faced. "It's a stark contrast between the freedoms, our way of life here in Georgia, or socialism — government control."

The Biden era is on the horizon — but that doesn't mean Canada-U.S. relations are back to normal