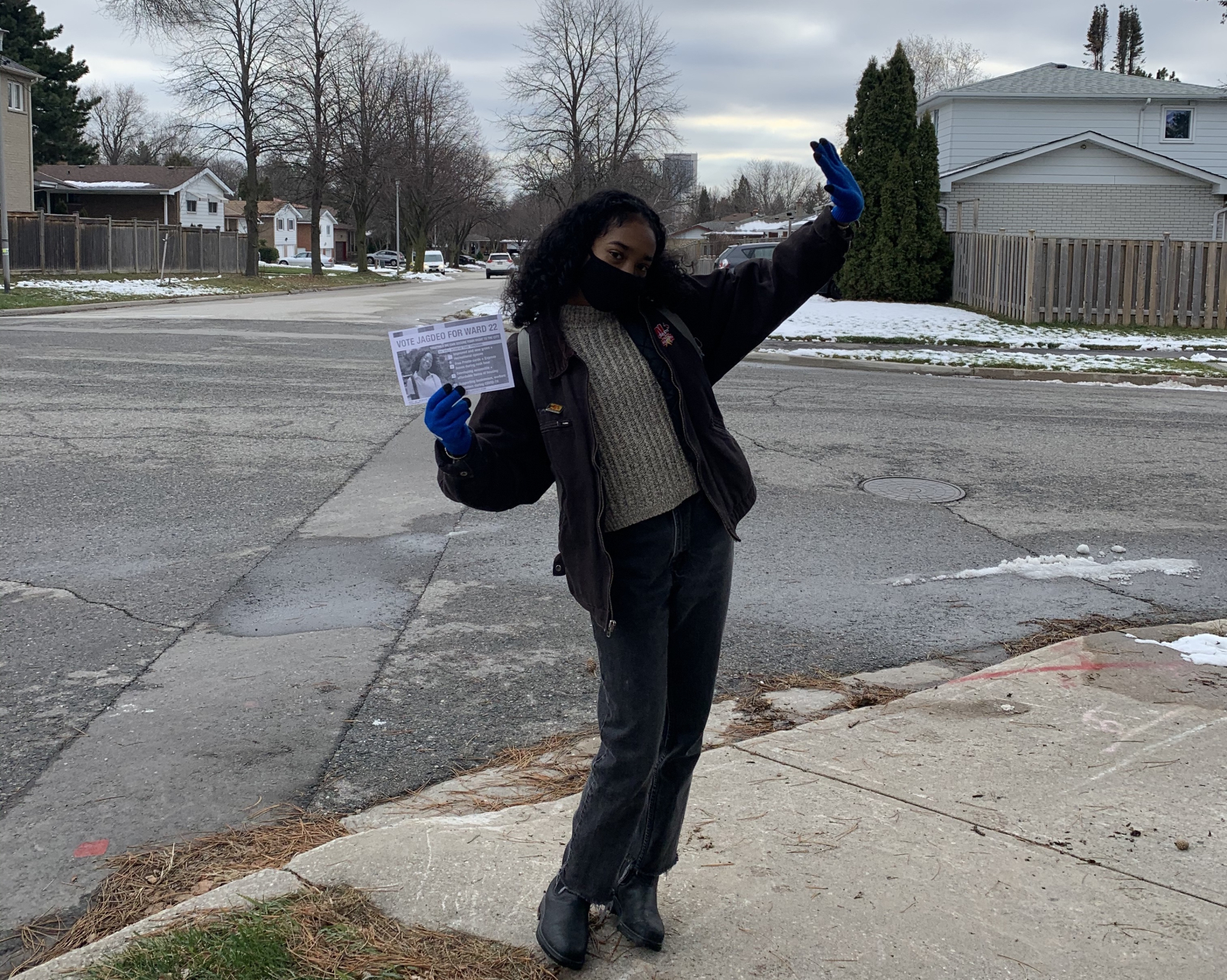 Mostly older, white men have seats on Toronto city council, but Renee Jagdeo is hoping to shift that mix a little closer to the demographics of the city’s residents later this month.

Jagdeo is a young racialized woman who has joined a crowded field of more than two dozen contenders to fill a vacated seat in Scarborough, and she has a clear vision of what she wants to achieve.

“I am representing a reality and lifestyle that isn't necessarily being advocated for in city council currently,” said Jagdeo, a second-year undergraduate student in urban planning at the University of Toronto’s department of human geography.

More than half the people living in Toronto in 2016 identified themselves as members of a visible minority, the technical term for non-white, compared to not even one-sixth of city council's makeup.

And just by running, Jagdeo says she is challenging a narrative that younger people are disinterested in politics.

“I feel like for a while there has been a lot of discourse and false narratives about young people not caring about politics, but I don't think that's necessarily the case,” she said.

“I've been fortunate to involve myself with the things that I care about, I have a community that does so similarly. I feel comfortable talking about things with my peers. It really is just a matter of whether or not we are respected in a public sphere,” she said, noting that while campaigning, she has found these things to be true.

Jagdeo says that ahead of the Jan. 15 byelection for the Scarborough-Agincourt seat, some critics have suggested she should have experience running a household or raising a family first.

“Owning a house, having a family, those are realities that a lot of people my age don't know if that’s feasible,” she said in a phone interview. “And it's hard for people who have those things to advocate for those who don't have it.”

Early on in her campaign, Jagdeo indulged in reading the negative comments online, which mostly came via Facebook posts of initial media coverage, “but now I'm at a place where I know whose opinions I care about and I know where I can get them from.”

Just by running for the Ward 22 seat, @reneejagdeo says she is challenging a narrative that younger people are disinterested in politics. #citycouncil #byelection #TOpolitics

That has included the mayor of Guelph, who recently reached out to offer counsel.

Housing and transit are two of the main pillars of Jagdeo’s campaign, which also includes a major push for more public green spaces to make everything the city can offer “a lot more attainable and accessible for all people, not only those who are fortunate enough to have those simple luxuries already.”

The Scarborough region in the east of Toronto is notoriously underserved by public transit, with various plans to extend subway or other services scrapped and redesigned by new iterations of council.

“That definitely poses a struggle for residents in terms of being able to get downtown or get to other parts of the city,” she said. “It forces you to be a person who owns a car or who spends up to two hours on various transit systems.”

The Ward 22 candidate wants to make it free to register for the reloadable PRESTO card used to access public transit (it currently costs $6).

She also wants to increase the supply of affordable housing by using surplus land or licensing more roomed housing, a type of accommodation where tenants share common kitchen and bathroom facilities and which would benefit students, newcomers, and low-income people.

The seat Jagdeo is hoping to win was previously held by long-time councillor Jim Karygiannis, who was removed from office in September after a lengthy court battle over his overspending during the 2018 municipal election campaign.

Jagdeo said the pandemic has highlighted the need for policy that bridges a growing gap between those who hold privilege and those who do not.

“I think it is largely a symptom of the pandemic, where we realize that a lot of these differences have become a lot wider and a lot more drastic,” she said, adding that government responses have shown “government can do something about it (and) makes it seem a lot more of a reality and less of a fairy tale.”

The pandemic and resulting social restrictions have also exposed the dearth of public green spaces in the city, she said, and fixing this shortfall would help facilitate a sense of community and improve residents’ mental health and well-being.

“I don't know about you, but I would love to have my mental health sustained by those structural things that other people can provide,” she said.

“In the summer, we were encouraged to go outside and meet in parks to social distance, and then we saw those parks overflow,” she said. “Having access to green space has recently become a luxury, it seems to me, and I don't think that should be a thing.”

Jagdeo is hosting a town hall event on the evening of Jan. 6 for residents interested in learning more about her platform.