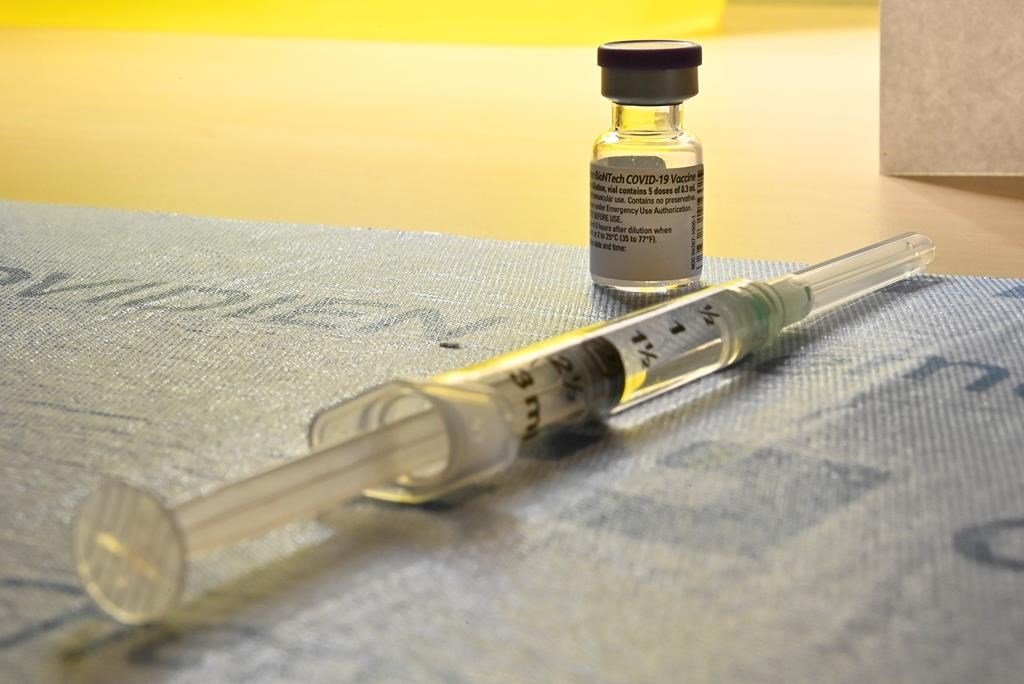 A syringe of the COVID-19 vaccine waits to be administered in Toronto on December 14, 2020. File photo by The Canadian Press/Frank Gunn
Previous story
Next story

The contract was recently posted to the federal procurement department's website after Ottawa called on a select number of companies to submit proposals for developing the system in December.

The new vaccine management system “will help manage vaccine rollout, administration and reporting on a go-forward basis, as the volume of deliveries increases,” according to Public Services and Procurement Canada.

The federal government has not said when it expects Deloitte to have the new system up and running even though COVID-19 vaccines are already being distributed across the country.

But University of Ottawa medical expert and Ottawa Hospital scientist Kumanan Wilson says the existing systems for tracking vaccinations across provinces are extremely diverse and are largely set up to track inoculations for children.

“So in Quebec, the health-care provider reports the vaccination status,” said Wilson, whose work includes creating a digital app called CANImmunize so Canadians can store and track their vaccination records.

“In Ontario, the responsibility is for the parents to report the vaccination data. ... Also who can provide a vaccine differs from province to province.

“What we need to move towards, for the system to enter into the 21st century, is a situation where the providers of vaccinations, public health and the recipient of the vaccine all get the same information in real time. And this needs to be facilitated digitally.”

The Ontario Medical Association in a report last month noted the same need, saying the collection of such information will help identify where COVID-19 vaccines in particular are still needed. It would also help track adverse reactions and other relevant data.

“Canada lacks a centralized vaccine-tracking system that would allow government and policy-makers to keep track of who is vaccinated, what vaccines have been used, where vaccine administration has taken place, and identify gaps in uptake,” the report says.

“A centralized and integrated digital vaccine registry would enable infection rates and vaccine coverage within specified areas to be tracked and compared and would allow vaccines to be distributed to areas of high need in the case of scarcity.”

Ottawa says 548,000 doses had been distributed to the provinces and territories as of last Thursday. Individual provinces are responsible for actually getting the shots into Canadians’ arms and reporting on those inoculations.

The government has said all Canadians who want vaccinations against COVID-19 will be able to get them by September, yet progress to date has been slower than expected and there has been talk about finding ways to immunize more people faster.

Canada’s chief public health officer Dr. Theresa Tam said last week that she had asked the National Advisory Committee on Immunization to study whether it would be warranted to delay the second doses of a two-dose COVID-19 vaccine in a bid to get first doses to more people faster.

The committee is expected to deliver its recommendations on Tuesday.