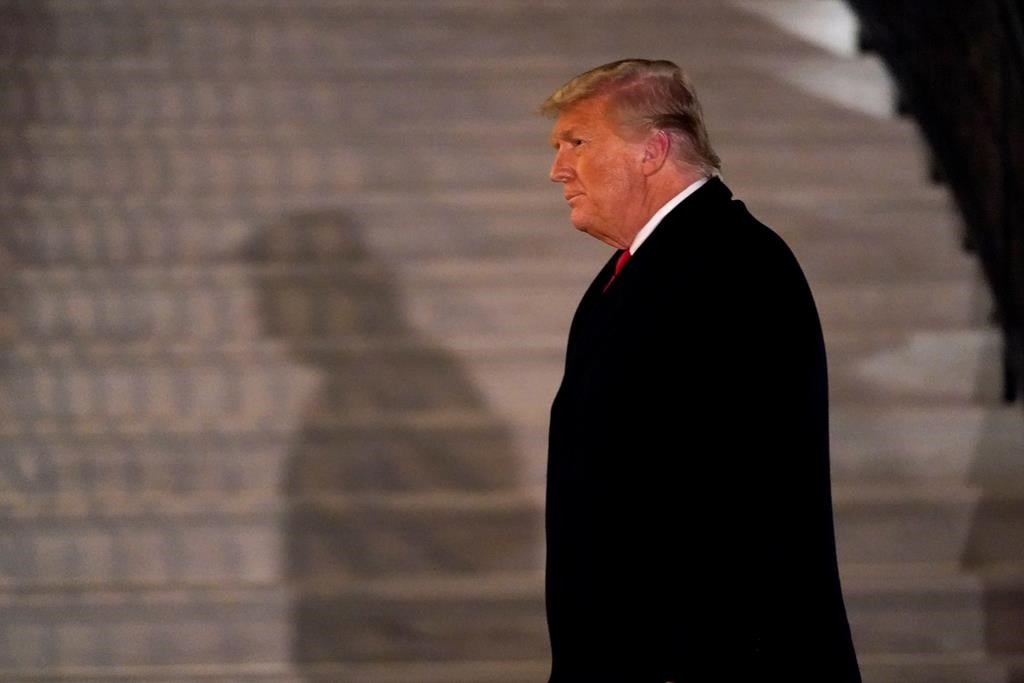 President Donald Trump arrives on the South Lawn of the White House, Tuesday, Jan. 12, 2021, in Washington. The president was returning from Texas. (AP Photo/Gerald Herbert)
Previous story
Next story

WASHINGTON D. C., Wash. — WASHINGTON, D.C. — Following last week’s "day of fire," another historic reckoning dawned Wednesday for Donald Trump as members of the House of Representatives debated whether to impeach the U.S. president for the second time in just over a year.

Lawmakers, many of them emotionally scarred and still seething with anger after surviving a Trump−fuelled rampage on Capitol Hill, were poised to vote on a resolution accusing the president of inciting an insurrection.

"He must go. He is a clear and present danger to the nation that we all love," said House Speaker Nancy Pelosi, who urged her Senate colleagues to convict the president when the time comes.

Conviction, she said, would be "a constitutional remedy that will ensure that the republic will be safe from this man who was so resolutely determined to tear down the things that we hold dear and that hold us together."

She pilloried the president for his relentless and fictional claims of a stolen presidential election, sowing doubt about democracy and urging state officials to "repeal reality."

"And then," she said, "came that day of fire we all experienced."

"Republicans have been consistent — we’ve condemned all the violence, all the time," said Ohio Rep. Jim Jordan, one of the president’s staunchest House allies.

"We should be focused on bringing the nation together. Instead, Democrats are going to impeach the president for a second time, one week before he leaves office. Why? Politics, and the fact they want to cancel the president."

Earlier in the day, House debate about the rules of impeachment was no less fiery.

"America was attacked, and we must respond," said Massachusetts Rep. Jim McGovern, chair of the House rules committee.

"Every second that this president remains in office is a danger to this country and to the world," Massachusetts Rep. Jim McGovern #impeachment #trump

"Every moment Donald Trump is in the White House, our nation, our freedom is in danger. He must be held to account for the attack on our Capitol that he organized and he incited."

Oklahoma Rep. Tom Cole, the deputy minority whip, tried to counter the Democrats’ offensive with the one and only argument Republicans have left: that impeachment would only aggravate Trump’s most combative supporters.

"I can think of no action the House can take that is more likely to further divide the American people than the action we are contemplating today," Cole said.

"Emotions are clearly running high and political divisions have never been more apparent in my lifetime."

South Carolina Sen. Lindsey Graham, a longtime Trump devotee who broke with the commander−in−chief in the hours following the riot, only to return to the fold during Tuesday’s presidential visit to the U.S.−Mexico border, weighed in via Twitter.

"Supporting the impeachment of President Trump under these circumstances will do great damage to the institutions of government," Graham tweeted, "and could invite further violence at a time the president is calling for calm."

Wednesday’s debate was taking place inside a Capitol precinct transformed into an armed fortress in the days since enraged Trump supporters, convinced by the president’s lies of a grand conspiracy to deny him a second term, overpowered a meagre police presence and forced their way into the building.

Five people died amid the mayhem, including Brian Sicknick, a Capitol Police officer who was assaulted in the melee, and Ashli Babbitt, 35, an Air Force veteran who was shot by police as she tried to get to the House chamber.

Since then, the entire complex has been surrounded by a two−metre fence and concrete barriers and flooded by members of the National Guard, whose ranks in the U.S. capital could top 15,000 by the time president−elect Joe Biden is inaugurated next week.

Everyone trying to enter the Capitol Building must pass through metal detectors, including members of Congress seeking to access their respective legislative chambers.

Lawmakers arriving for Wednesday’s debate were greeted by a striking spectacle: armed soldiers, their riot gear at the ready, temporarily camped out on the floor of the visitors centre — the first military bivouac on Capitol Hill since the days of Abraham Lincoln.

"We all want to talk about unity," McGovern said.

"I can’t think of anything that will unify this country more than if there was a big bipartisan vote in favour of impeachment. Every second that this president remains in office is a danger to this country and to the world."

Given the number of Democrats who have promised to vote to impeach, along with an indeterminate handful of Republicans, impeachment is all but a foregone conclusion, making Trump the first president in U.S. history to experience the indignity twice.

When the article of impeachment goes to the Senate for trial, and whether the necessary two−thirds of senators would vote to convict once it does, remains unclear.

Importantly, conviction in the Senate would bar Trump from ever seeking public office again, thwarting any plans he may have to run again in 2024.

The timing is key: the Senate isn’t currently scheduled to sit before Tuesday, the day before president−elect Joe Biden is to be sworn in and Democrats take control of the Senate.