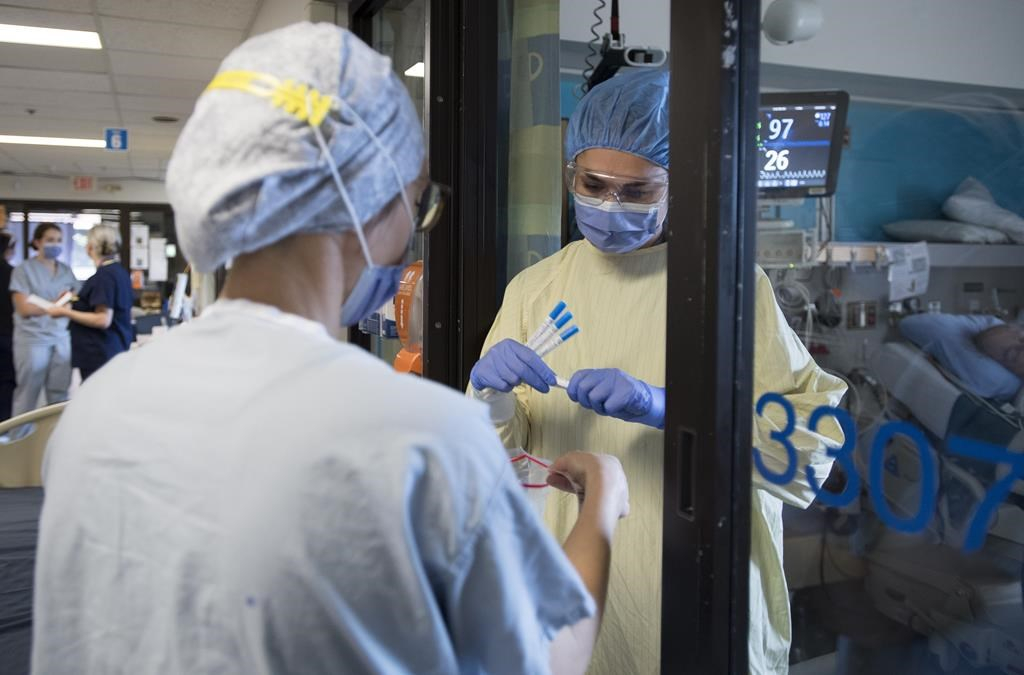 Nurses collect samples from a patient in a COVID suspect room in the COVID-19 intensive care unit at St. Paul's hospital in downtown Vancouver, on Tuesday, April 21, 2020. File photo by The Canadian Press/Jonathan Hayward
Previous story
Next story

Testing patients for COVID-19 before their scheduled surgery and transfer to wards from emergency departments could reduce hospital outbreaks in British Columbia as cases rise, the results of a pilot project in the province's largest health authority suggest.

Fraser Health said that out of 5,681 patients who were booked for surgery, 65 tested positive for the virus but had no symptoms and would not have warranted a test based on a screening questionnaire. Of 2,969 patients booked for elective surgery, 11 were infected with the virus but were asymptomatic.

"Unidentified COVID-19 cases can lead to transmission and contribute to outbreaks," the health authority says about its enhanced testing in a memo to staff.

Testing began in mid-November over three weeks for surgical patients and four weeks for patients who had been in emergency rooms.

"The triggers that led to the evaluation were two or more COVID-19 outbreaks in acute care and a testing positivity rate greater than five per cent. Both of these conditions still exist within Fraser Health," the memo says, adding the health authority has continued testing for the virus.

The positivity rate, or the percentage of all COVID-19 tests performed that show infection, was 9.6 per cent when testing began in Fraser Health and is now at eight per cent, data from the BC Centre for Disease Control show.

The Northern Health Authority's positivity rate shot to 16 per cent from 0.5 per cent in October, according to the centre's data, which also show the Interior Health region's rate has risen to 8.3 per cent, from a low of 1.7 per cent in November.

In November, more than 500 doctors and nurses across B.C. sent a letter to provincial health officer Dr. Bonnie Henry and Health Minister Adrian Dix saying routine testing should be done at all acute-care centres because screening for symptoms was no longer sufficient in the second wave of the pandemic.

"Based on rising prevalence, we request an urgent reassessment of the issue of preoperative testing for surgical patients to ensure we prioritize the safety of our patients and maintain current levels of surgical productivity," the letter says of the screening protocol put in place in May.

It says screening questionnaires don't adequately identify risks for COVID-19 infection because they rely on patients to truthfully disclose all symptoms and some people arrive in hospital with symptoms, delaying surgery and putting others, including staff, at risk.

Doctors, nurses call on B.C. to test surgical, emergency patients for #COVID19. #BC

They include two units at St. Paul's Hospital in Vancouver, as well as the Cardiac Care Intensive Care Unit, all of which are closed to new admissions and transfers.

Henry acknowledged Monday that Fraser Health is testing patients because of its high positivity rate and that Northern Health "has had a very challenging few months."

However, she suggested there is not a need for more widespread testing of patients before scheduled surgeries or admission to hospital from emergency departments.

Dr. Shannon Lockhart, a Vancouver anesthesiologist who is among the physicians who signed the letter to Henry and Dix, said physical distancing isn't always possible in hospitals and there are multiple reasons why patients may not be able to wear a mask, especially when a breathing tube is removed after general anesthetic and they may cough, raising the risk of transmission.

"These constraints increase the risk for infections to become super-spreading events as we've seen in some of the hospital outbreaks," she said, adding recent studies from around the world show that surgical patients with COVID-19 are at greater risk of death.

Parts of Ontario and Nova Scotia require patients to be tested for COVID-19 several days before their scheduled surgery.