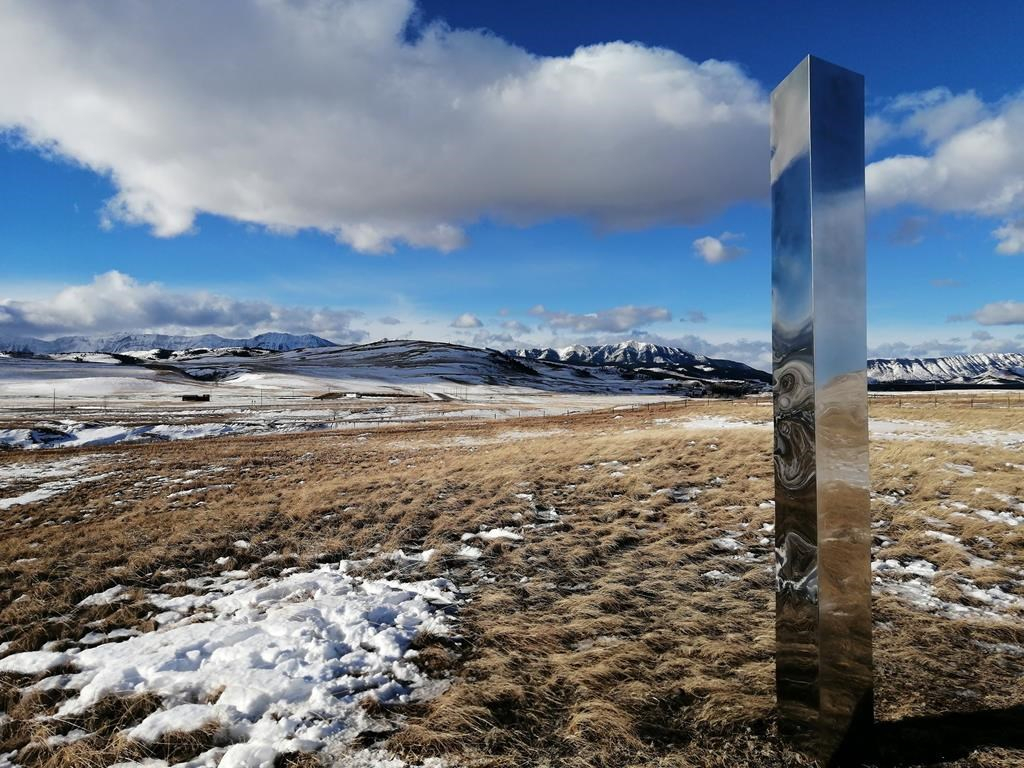 A monolith in Alberta is shown in a recent handout photo. Handout photo by Elizabeth Williams
Previous story
Next story

A towering stainless steel monolith set up along the eastern slopes of the Rocky Mountains in Alberta comes with a message.

The three-metre-tall structure, which reflects its surroundings, is one of many that have been found around the world in recent months. Monoliths have been discovered on a California trail, a Utah desert and at sites across Canada.

Many have popped up without explanation, but the woman who built the one in southern Alberta says she wanted to draw attention to the threats the area is facing as the province moves to open a vast stretch of the mountains to open-pit coal mining.

"This land holds the bones and dreams of our ancestors. This soil remembers the thunder of buffalo hooves and ... still fosters wild grasses. These mountain-fed waters are the lifeblood of southern Alberta," Elizabeth Williams wrote in an Instagram post on her wildstonestories page earlier this month.

"They deserve our attention. They warrant our protection. They are under threat," she wrote.

"The shiny beacon is not the focal point, but the land, which it reflects."

Williams, who couldn't work as a massage therapist during COVID-19 restrictions, said she's been watching some of the provincial government's recent decisions.

"I felt compelled to take action," she said in an interview with The Canadian Press.

Williams is most concerned about the potential for mining along the eastern slopes and the reallocation of water rights in the area.

"It's staggering to me so few Albertans are aware that this is happening," she said.

A towering stainless steel monolith set up along the eastern slopes of the Rocky Mountains in #Alberta comes with a message. #Coal

She wanted to do something to inspire others to pay attention and take action.

Similar concerns were raised this week by Alberta country singer Corb Lund, who criticized the plan for an area that contains the headwaters for freshwater on which millions depend. Coal mining can release selenium, a highly toxic element already poisoning watersheds downstream of coal mines in British Columbia. Paul Brandt, another country music star from Alberta, added his voice to protest the coal mines Thursday.

Williams, who hopes her monolith adds to the growing conversation in Alberta, said she built it after talking to an artist, ordering the stainless steel and borrowing a welding shop. She installed it with the help of volunteers after getting permission from private landowners to put it on their property.

"I thought, 'If I make this to last, if I make this extra beautiful and I get it on private land, it can stay and it can become a beacon for the curious.'"

The monolith, which was installed in early January, has come with challenges.

Williams broke her hand as she and some volunteers were installing it on a windy day where the Oldman River meets Highway 22, known as the Cowboy Trail. And her creation was vandalized by a man who pulled his big truck over at a pullout along the highway and tried to take the monolith apart.

"I have it all on camera," said Williams, who noted people are keeping a close eye on the area.

Others have expressed intrigue and interest after spotting it on the landscape.

"It looked a little bit startling to see it where it hadn't been before," said Kevin van Tighem, a conservationist and author who owns property in southern Alberta. "It's really beautiful. It's a real work of art.

"It's really striking how it reflects so much of the landscape and by doing that moves us into thinking about reflecting on the landscape."

He said he hopes it draws attention to the natural beauty of the eastern slopes, which he believes are under serious threat as companies start exploring for coal.

"We have to reflect on who we are and where we're going. We're on the cusp here. This is leading us to permanent change and permanent loss.

"We cannot not be paying attention."

This report by The Canadian Press was first published Jan. 15, 2021