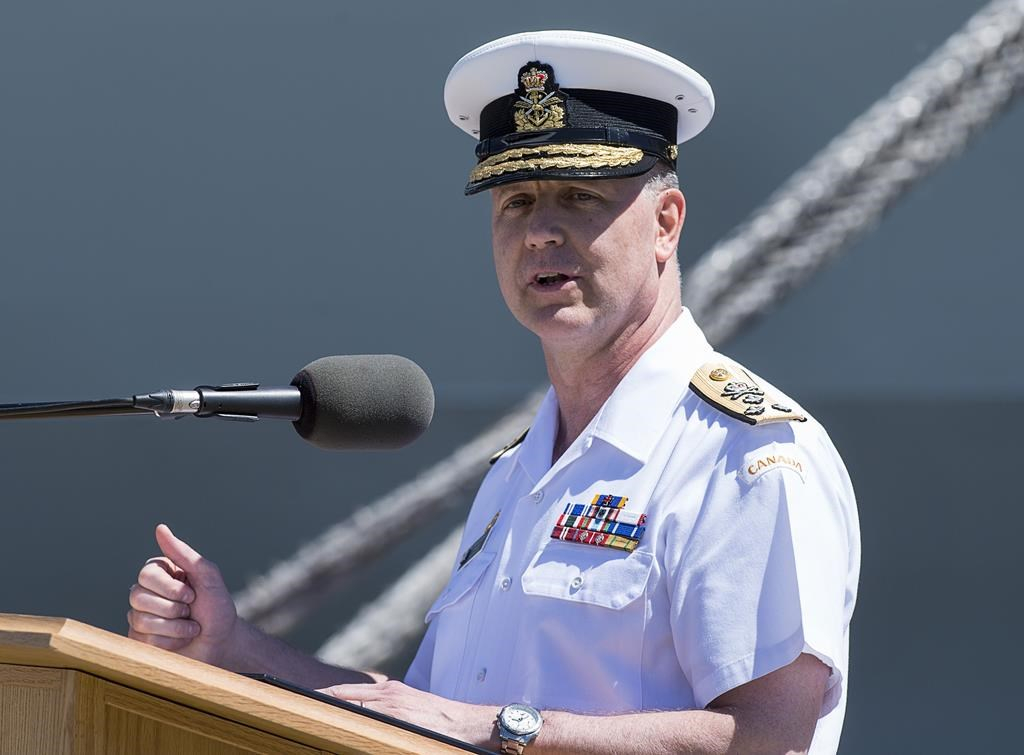 Art McDonald, then the new head of the navy, addressed the audience at the Royal Canadian Navy change of command ceremony in Halifax on June 12, 2019. File photo by The Canadian Press/Andrew Vaughan
Previous story
Next story

Admiral Art McDonald used his first address as Canada’s new chief of the defence staff Thursday to apologize to Canadian Armed Forces members who have faced discrimination or harassment while serving.

McDonald was sworn in as defence chief during a low-key ceremony in a mostly empty room at National Defence Headquarters as dignitaries such as Prime Minister Justin Trudeau and Gov. Gen. Julie Payette attended virtually due to COVID-19.

The pandemic loomed large during the event, which saw McDonald take over from Gen. Jonathan Vance. The two senior officers sported masks and many of the trappings of such change-of-command ceremonies were scaled back or omitted entirely.

COVID-19 also figured prominently in the many speeches delivered during the ceremony, in which the pandemic was listed as one of many challenges at home and abroad that Canada and its military are facing as McDonald takes command.

While that list also included such threats as climate change and geopolitical instability, those in attendance — including McDonald — repeatedly went back to one theme: the need for culture change in the Canadian Armed Forces.

McDonald promised to continue the work launched during Vance’s five-year tenure as defence chief, including efforts to root out sexual misconduct and hate from the ranks. He apologized to those who had suffered from such scourges.

“I apologize to you, my teammates, our teammates, who have experienced racism, discriminatory behaviour and or hateful conduct. I'm deeply sorry,” McDonald said.

“I want you to know that I will do all that I can to support you, to stop these unacceptable acts from happening, and to put into practice our guiding principle: respect the dignity of all persons. Creating a respectful environment is a responsibility that we all share.”

McDonald later told reporters that he felt it necessary to make the apology because he was himself guilty — even though it was unintentional — of having perpetuated some of the problems that the military is now trying to address.

“My case is one that's representative of many: I think I was doing the things that needed to be done, but then when challenged by some of the circumstances, I thought maybe I didn't hear a voice,” he said.

“It caused me to realize that if I look around, and I saw a force ... that really thought that they were doing the right things. And yet some amongst us — either themselves reporting it or it being reported from outside — they didn't feel that same peace.”

The military has been battered by revelations of some members’ links to right-wing groups and hate even as it works to eliminate sexual misconduct.

Trudeau, who told The Canadian Press last month that he expects Canada’s new chief of defence staff to make eliminating hate from the military a top priority, noted McDonald’s efforts as commander of the Royal Canadian Navy to make that force more inclusive.

Those included a high-profile campaign last year that saw "seaman" dropped from the rank titles of junior sailors in favour of more gender-neutral terms.

A former frigate captain who oversaw part of Canada’s humanitarian response to the devastating earthquake in Haiti in 2010 before commanding the country’s Pacific fleet, McDonald is the first naval officer to serve as the permanent defence chief since 1993.

During his final address in uniform, an emotional Vance listed hatred and intolerance as threats that must be overcome to protect the military’s morale, cohesion and ability to defend Canada.

“Face these threats, all of them, deal with them as the professionals you are, and you will continue to earn the respect and gratitude of Canada, our allies, and your comrades-in-arms,” Vance added.

While culture change will figure prominently in McDonald’s mandate, he acknowledged to reporters that dealing with the pandemic is his most pressing challenge.

McDonald underscored that his marching orders from government include a significant degree of continuity, not just in the efforts at social change launched by Vance, but in ensuring the military is ready to respond to any threat.

That involves, among other things, continuing to implement the Liberals’ defence policy, which was unveiled in 2017 and has promised billions in spending on new military equipment over the next two decades.

McDonald could face a challenge much sooner than that over the effort to build a fleet of new warships for the navy, and concerns the $56 billion set aside by Ottawa for those 15 ships won’t be nearly enough.

The parliamentary budget officer will release a report this month on the expected costs of those warships. There has been a great deal of hand-wringing inside the Department of National Defence and some corners of the government that the price will be billions more.

That would set off a fresh round of lobbying by defence companies to abandon the project, which is supposed to see 15 Type-26 frigates built at Irving Shipyards in Halifax over the next 20 years, and start over.

It is also likely to force some tough discussions within the military and government about whether to throw more money at the project, which was budgeted at $24 billion when it was launched in 2011, or scale it back.

McDonald made no mention of the warship project on Thursday.

“In the navy, the pursuit of a consistent course or heading is set by the order, ‘Steady,’” he said during the ceremony. “What is our heading as the watch changes? My order is 'Steady,' even as the world around us is not.”