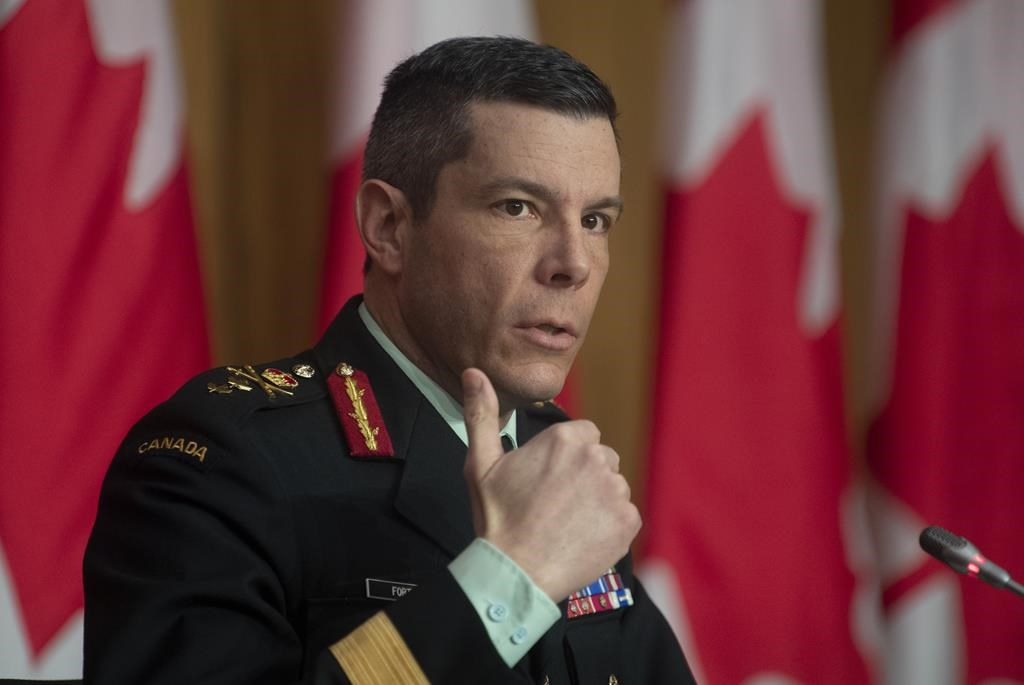 Maj.-Gen. Dany Fortin responds to a question on COVID vaccines during a news conference, on Thursday, Jan. 14, 2021 in Ottawa. File photo by The Canadian Press/Adrian Wyld
Previous story
Next story

Canada's vaccine deliveries are getting bigger almost every week but there won't be enough doses shipped to provinces and territories to "ramp up" the vaccination program for another few months, Maj. Gen. Dany Fortin outlined on Thursday.

Fortin said deliveries of vaccines from Pfizer-BioNTech and Moderna will hit one million doses per week starting in April.

The confirmation aligns with plans made public Thursday by the Ontario government that it won't be able to expand its vaccine program beyond the first four priority groups until April.

Thursday marked one month since the first Canadians got vaccinated against COVID-19, and more than 443,000 people have now received at least one dose. It's estimated about 21,000 of those have also received their second dose.

Fortin, the vice-president of logistics at the Public Health Agency of Canada, said by the end of this week more than 929,000 doses of vaccine from Pfizer/BioNTech and Moderna will have been delivered to provinces and territories. Shipments are growing almost by the week, with 1.9 million expected in February and another 2.7 million in March.

In April, Fortin said, the combined shipments of both will grow to about one million every week and will continue to increase so that 20 million total doses will arrive between April and the end of June.

"This will signal our transition into this ramp-up phase," said Fortin.

Canada is to get 80 million doses of both vaccines this year which should be enough to vaccinate every Canadian. But it is also reviewing two other possible vaccines already, including one from Johnson & Johnson, which reported results from early trials Thursday and expects to have final results ready by early February at the latest.

Canada has a contract to buy 10 million doses from Johnson & Johnson, which is the only vaccine that could be a single-dose delivery.

Fortin said he has suggested delivery schedules for Johnson & Johnson but nothing will be confirmed unless and until the vaccine gets approved by Health Canada.

The AstraZeneca vaccine, which could add another 20 million doses to Canada's total, is the only other one pending approval at the moment. Canada has contracts to buy vaccines from three other producers but none of those are close to finishing their clinical trials and have not submitted a request for approval to Health Canada yet.

'Ramp up' of #vaccine delivery in Canada not expected until April, Fortin says. #Covid19 #cdnpoli

Fortin said procurement and health officials are working constantly with vaccine suppliers "to maximize the vaccine availability so that all Canadians, as many Canadians as possible can be immunized as rapidly as possible in the year."

Ontario expects to expand its program in April, to seniors living independently, teachers, people working in food processing facilities, and those with high-risk chronic conditions. It will start with people over the age of 80, and then reduce the age by five years at a time.

A general vaccination program for all others not covered in phase two should be able to roll out in August.