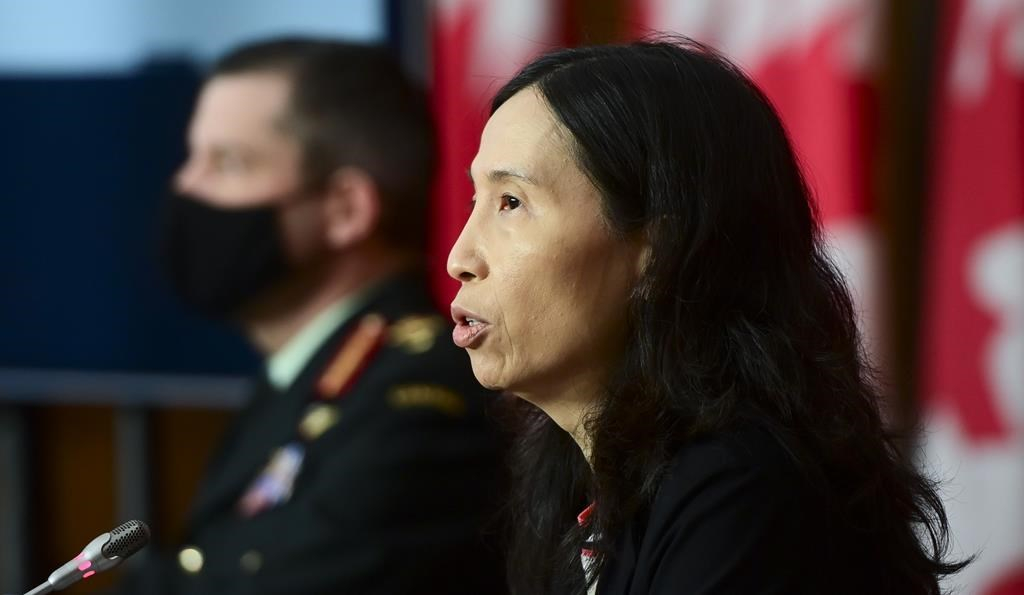 British Columbia's decision to seek legal advice on limiting travel reinforces the message that it isn't the time to go on vacation across the country, Canada's chief medical officer of health said Friday.

Dr. Theresa Tam said stopping non-essential travel would be a difficult decision for the province, but it could reduce COVID-19 by cutting the number of contacts.

"If you’re vacationing and travelling across Canada, this is not the time to be doing non-essential travel," she said.

Premier John Horgan's government is seeking legal advice on whether it can limit interprovincial travel, but a civil liberties lawyer said Friday the province would need evidence to support a ban.

Other provinces and territories, including those in Atlantic Canada, have required travellers to self-isolate upon arrival or get authorization to travel.

Horgan said he and other premiers have made the case for Canadians to stay home during the pandemic, but people continue to travel. The issue has been discussed for months and it's time to determine if the government can act, Horgan added.

Cara Zwibel, a lawyer with the Canadian Civil Liberties Association and the director of its fundamental freedoms program, said the government needs to show evidence that such a measure would be necessary.

It's unclear if B.C. has seen a rise in COVID-19 cases linked to interprovincial travel, Zwibel added.

The Canadian Civil Liberties Association challenged a similar decision by the Newfoundland and Labrador government to limit non-residents from travelling to the province earlier on in the pandemic.

British Columbia's decision to seek legal advice on limiting travel reinforces the message that it isn't the time to go on vacation across the country, Canada's chief medical officer of health said on Friday, January 15, 2021. #bcpoli #Covid19

Zwibel said her organization would consider challenging a similar move from B.C. to ban outside travel, depending on the outcome of its appeal of a decision upholding restrictions in the Newfoundland and Labrador case.

B.C.'s Health Ministry said in a statement that questions about interprovincial travel had repeatedly come up, but that essential travel critical to the well-being of the economy must continue.

"We are also considering economic impacts and the practicalities of such a policy, and are reaching out to key sectors of the economy to get feedback," it said. "No steps will be taken without thoughtful consultation with communities and businesses affected by these decisions."

Health Minister Adrian Dix said Friday that British Columbia is doing better than many of the provinces where most of the interprovincial travel comes from, but it still needs to be careful.

"It's not just an issue of what we'd call establishing a bubble, there may be other steps that can be taken to address travel," he said.

Errol Mendes, a professor of constitutional and international law at the University of Ottawa, said if B.C. attempts to create a similar scenario to the Atlantic bubble, he expects it would be challenged.

"I think it would be, at first glance, a clear violation of Section 6 of the charter," he said. "You cannot take the Atlantic bubble and say that it equally applies to British Columbia."

That particular section of the charter says citizens have the right to remain in, enter and leave Canada as well as the ability to move to and take up a residence in any province.

Putting in a travel ban, or placing a limit, also raises questions about the inevitable exceptions you would put in place to allow essential travel, Mendes said. It leads to legal scrutiny as well of the powers the government grants the police to manage such a situation, he added.

B.C.'s provincial health officer, Dr. Bonnie Henry, said Thursday that she's not sure if she has the authority to limit out-of-province travel, nor was she considering such an order.

"We do have requirements that people who come into British Columbia must follow the rules in place here, and that is something that is continuing to be reinforced," she said.