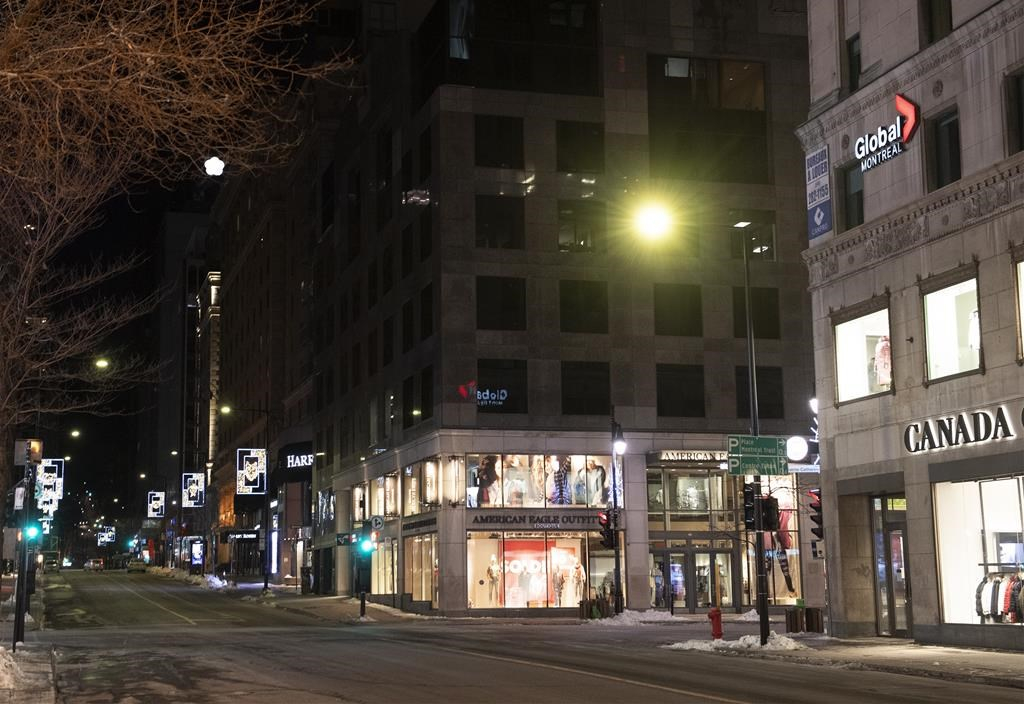 An empty Peel and Sainte-Catherine street is shown in Montreal, on Saturday, Jan. 9, 2021, as the COVID-19 pandemic continues in Canada and around the world. File photo by The Canadian Press/Graham Hughes
Previous story
Next story

Almost two-thirds of Canadians would support a nightly curfew if necessary to curb the spread of COVID-19 — even though they're not convinced it would be effective, a new poll suggests.

Sixty-five per cent of respondents to a poll by Léger and the Association for Canadian Studies said they would support temporary curfews in their provinces if recommended by public health officials.

In Quebec, where the government imposed a month-long curfew 10 days ago, 74 per cent said they support the move.

Nevertheless, only 57 per cent of Quebecers and just 39 per cent of respondents in the rest of the country said they think curfews are an effective way to reduce the spread of the coronavirus that causes COVID-19.

Léger executive vice-president Christian Bourque said the results suggest Canadians "want to do their part and will stand by their governments" in efforts to reduce the spread of the virus. But it also suggests provinces "need to sell this thing (curfews) if they want to make it work."

The poll also suggests that Canadians' mental health has suffered as the pandemic drags on.

Twenty-one per cent rated their mental health as bad or very bad, up eight points since last April, when the first wave of COVID-19 rolled over Canada.

Bourque said mental health experts do not consider "good" to be a particularly positive rating, akin to someone saying they feel OK.

Almost two-thirds of Canadians would support a nightly #curfew if necessary to curb the spread of #COVID19 — even though they're not convinced it would be effective, a new poll suggests.

Seventy-one per cent of respondents said they intend to get vaccinated against the coronavirus when a vaccine becomes available to them.

Two vaccines have been approved for use in Canada so far and provinces have begun immunizing front line health care workers, long-term care home workers and residents and some others considered among the most vulnerable.

The online poll cannot be assigned a margin of error because internet-based polls are not considered random samples.