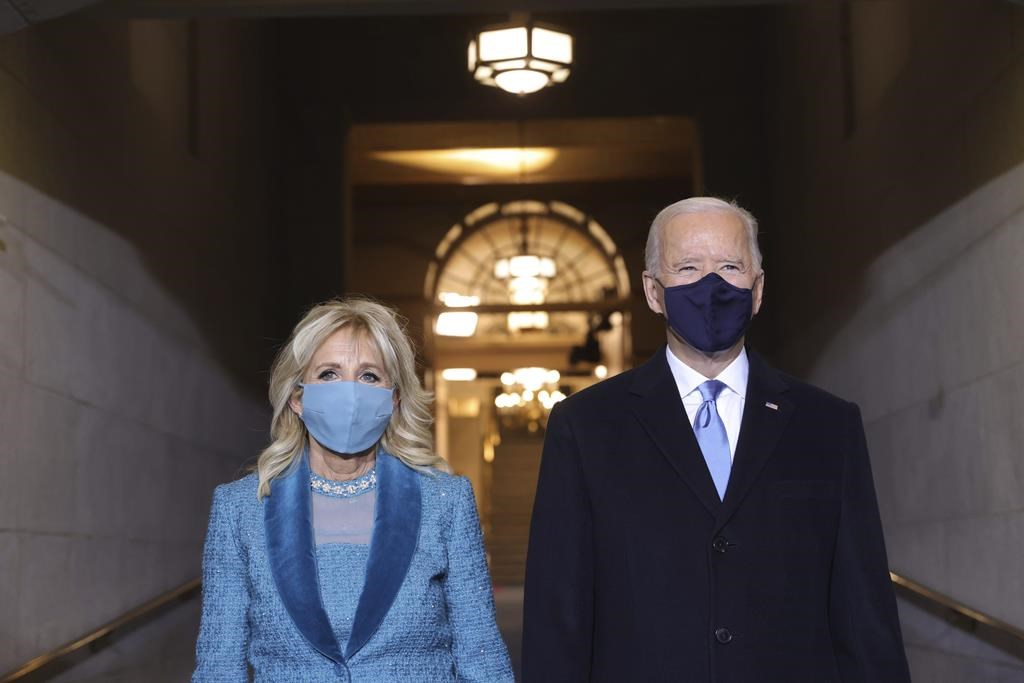 President-elect Joe Biden and Jill Biden arrive at his inauguration at the West Front at the U.S. Capital. Photo by The Associated Press/Manuel Balce Ceneta
Previous story
Next story

WASHINGTON — Relief, apprehension and a touch of pandemic-tinged festivity washed over the U.S. capital as Donald Trump finally ceded the White House to Joe Biden and his heartfelt message of reconciliation and recovery.

"America has been tested and we've come out stronger for it," Biden told his battered, divided country and the world after taking his oath of office.

Biden pledged unity and healed relations, noting the one-year COVID-19 American death toll of 400,000 matched the country's losses in the entire Second World War. He led a silent 10-second moment of prayer in their memory.

He evoked the Civil War, the Great Depression and the 9/11 attacks, saying the U.S. would overcome its current differences and prevail through "a dark winter" confronting the pandemic as "one nation."

Biden called on Americans to "defend the truth and defeat the lies," pledging to also be the president for those who did not vote for him.

Biden did not mention Trump by name.

"This is our historic moment," Biden said, adding: "Unity is our path forward."

By the time Biden was sworn in as the 46th U.S. president, Trump was in Florida — a fitting split-screen end to one of the most acrimonious periods in American history.

Biden arrived at the Capitol at about 11:20 a.m. eastern time. He followed Kamala Harris, his running mate, who was escorted in by a police officer who helped stave off an insurrection at that spot two weeks ago.

Eugene Goodman, the Capitol Police officer who helped defend the U.S. Capitol against the attack two weeks ago, accompanied Harris, the vice-president elect, to the ceremony.

Despite COVID-19 and massive security to protect against a repeat attack, a marching band provided the backdrop for a festive atmosphere as images of outgoing vice-president Mike Pence interacting with former U.S. presidents were broadcast worldwide. Bill Clinton, George W. Bush, Barack Obama and their families mingled while wearing masks.

An unmasked Lady Gaga sang "The Star-Spangled Banner," while an unmasked Jennifer Lopez offered up a stirring medley of "This Land Is Your Land" and "America The Beautiful." Garth Brooks sung the hymn "Amazing Grace."

He arrived at the base via helicopter, landing to the strains of his 1980s rally playlist — "Gloria," "YMCA" and a new farewell addition, "My Way" — before being greeted by a 21-gun salute and cheers from a modest crowd of about 200 supporters.

It's believed to be the first time in 152 years that a sitting president has opted to skip out on the inauguration of his successor.

"As the athletes would say, we left it all on the field," Trump said during an ad libbed speech that included a rare thank-you from his wife, Melania.

"You are amazing people, this is a great, great country and it is my greatest honour and privilege to have been your president."

Trump even looked emotional — a rare sight for a president who purports to value toughness above all else — as he basked in the cheering for a final time.

"We will be back, in some form," he promised. "Have a good life. We will see you soon."

Instead of flag-waving crowds and gala balls, inauguration day is playing out behind a gauntlet of National Guard troops in the centre of a largely deserted, locked-down city.

Kirsten Hillman, Canada's ambassador to the U.S., was among the comparatively small number of people attending the ceremony in person.

"I'm actually not nervous, because I have seen first-hand all of the strong security presence throughout downtown D.C.," Hillman said in an interview.

"I'm feeling quite confident that it's going to be safe."

The fact that safety is even a question at a U.S. presidential inauguration is remarkable in itself. But the Jan. 6 siege at the Capitol changed everything — including confidence in the National Guard.

The FBI has been working to vet all 25,000 Guard members deployed in Washington, worried about the potential for an insider attack or other threat.

So far, 12 members have been removed from their D.C. assignment, including two who reportedly made extremist posts or texts in reference to the inauguration. There were no specific threats to Biden.

Guard members have been a fixture in the city for weeks, gradually expanding a rigid security perimeter that now encircles virtually the entire downtown core.

Unscalable two-metre fences, some of them topped with razor wire, line block after block, with streets closed off by concrete barriers, troop transports and Humvees.

For Hillman, all of it provides a pointed reminder that democracies shouldn't be taken for granted.

"We should all celebrate our democracies, often and heartily — in my view, I think we take them for granted a little more than we should sometimes," she said.

The fact that Congress persevered the night of Jan. 6 and ultimately finished the job of certifying Biden's election win was a testament to the country's enduring spirit, she said.

"No matter what the challenges … people are going to make this work because it is fundamental to their democracy. So, I think you can turn it around and see it as a real testament to the strength of institutions that have been severely tested."

Hillman herself may already face a severe test of her own.

As one of his first actions in the White House, Biden is expected to sign an executive order rescinding Trump's presidential permit for the Keystone XL oil pipeline.

The transition team confirmed that plan Tuesday, promising to revoke, revise or replace any orders Trump signed "that do not serve the U.S. national interest, including revoking the presidential permit granted to the Keystone XL pipeline."

Advocates for the project have been clinging to hope that the ensuing outcry — the Alberta government is already threatening legal action — will prompt the Biden team to have second thoughts.

Either way, Hillman is sanguine about a new era in Canada-U. S. relations getting off to an awkward start.