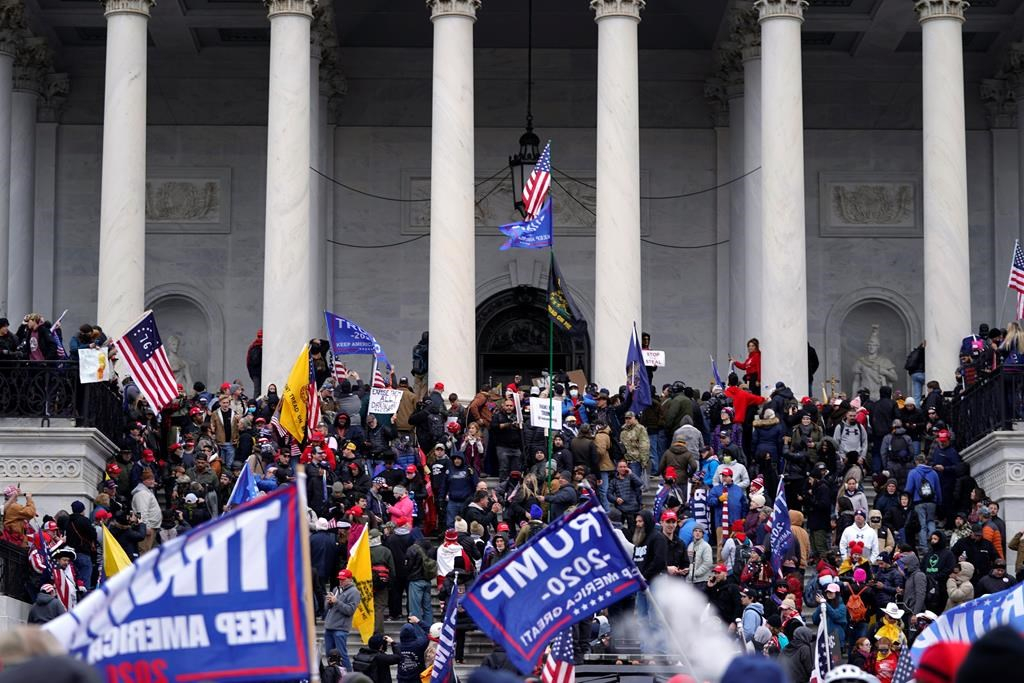 Trump supporters rally on Wednesday, Jan. 6, 2021, at the Capitol in Washington. File photo by The Associated Press/Julio Cortez
Previous story
Next story

A Canadian neonatal intensive care nurse who spoke at an anti-lockdown rally in Washington, D.C., has been fired, her employer said on Tuesday.

The London Health Sciences Centre in London, Ont., confirmed its termination of Kristen Nagle, who had been suspended since November after attending a similar rally in the city.

Nagle was one of two Canadian nurses who drew attention for speaking in Washington on Jan. 6. before supporters of U.S. President Donald Trump stormed the Capitol, leading to five deaths.

In a statement, the London hospital said it suspended Nagle without pay in November for actions "not aligned" with its values and then began an internal investigation. That investigation was now complete, the hospital said.

"While we are not able to address the specifics of the investigation, we can confirm that the nurse has been terminated with cause," the statement said. "Safeguarding the health of our patients and their families, staff and physicians is of the utmost importance and remains our top priority."

Nagle, a 14-year registered nurse, could not immediately be reached for comment.

A petition calling for Nagle to be allowed to continue practising as a registered nurse garnered the 1,500 signatures it aimed to collect by noon on Thursday before now pushing to reach 2,500.

"People are attacking this human who has an impeccable patient/nurse relationship," the petition states. "She has never brought any harm to them, nor would she ever put herself in a position to cause harm."

Among other things, the petition states Nagle took no part in the Capitol protests and was only in D.C. because a summit organized by a group called Global Frontline Nurses had been moved from Florida to the American capital. It also says she has self-quarantined as required.

"There are countless nurses who understand that something is not right with the system right now and are terrified from speaking out for fear of getting fired or have their licenses stripped," the petition states.

Those signing the online petition called Nagle's fight one of free speech.

A Canadian neonatal intensive care #nurse who spoke at an anti-lockdown rally in Washington, D.C., has been fired, her employer said on Tuesday, January 19, 2021. #lockdown #Covid19

"Freedom of speech is imperative in a democratic society," said one signatory, identified as Amanda Nafziger.

The College of Nurses of Ontario has previously said it was investigating both Nagle and Sarah Choujounian, a registered practical nurse since 2004. The college said it could not provide details and had no further comment on Tuesday.

Nagle and Choujounian both spoke at the Jan. 6 rally organized by Global Frontline Nurses, which maintains "fraud is rampant" regarding the COVID-19 crisis inside and outside hospitals.

At the summit, Nagle said nurses were being threatened for speaking out or holding contrary views. She slammed policies she said isolate new mothers at a critical time.

"We are sharing truth with you whatever the cost may be,'' Nagle said. "Nurses, it is our time to rise."

Choujounian had spent most of her career at a north Toronto nursing home until last year, has publicly decried COVID-19 vaccines as "experimental" and "unsafe." The founder of a group called Nurses Against Lockdowns, she has called the vaccine promotion and use a "crime against humanity."

Global Frontline Nurses has called on nurses to come forward ahead of a news conference on Jan. 21.

Ford lashes out at anti-lockdown protesters outside his house, begs them to stop