Vaccine deliveries to Canada could be subject to European export controls 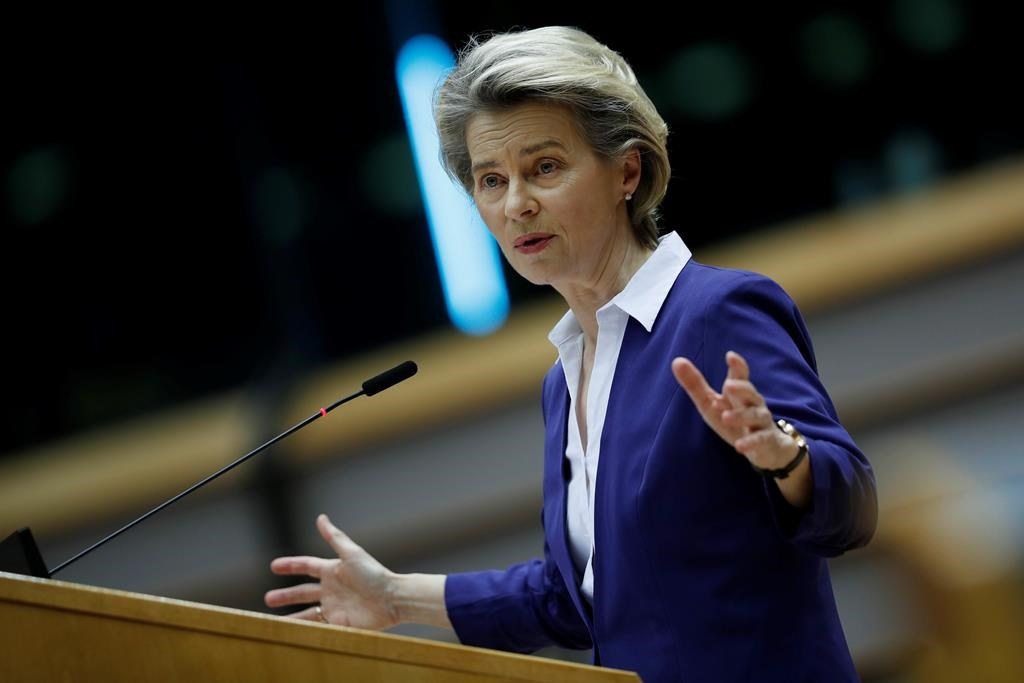 All of Canada's current vaccine doses from Pfizer-BioNTech and Moderna are made in Europe, potentially putting at risk the entirety of Canada's vaccine deliveries.

European Commission President Ursula von der Leyen said in a video statement posted to Twitter Tuesday that Europe will set up a "vaccine export transparency mechanism" so Europe knows exactly how many doses are being produced in the world's largest trading bloc and where they are being shipped.

"Europe invested billions to help develop the world‘s first COVID-19 vaccines to create a truly global common good," she said. "And now the companies must deliver."

Europe — like Canada — is being shorted on deliveries from Pfizer as the company slows production to expand its plant in Belgium. Canada is getting no deliveries at all from Pfizer this week, and only one-quarter of the previously promised delivery next week.

AstraZeneca, whose vaccine is on tap to be approved in Europe later this week, has also now informed Europe production issues will reduce initial deliveries.

But unlike Canada, Europe invested more than C$4 billion to develop and produce some of the vaccines now being produced, including Pfizer's and AstraZeneca's. And Europe wants its doses. Canada's investments in vaccine development have gone mainly to Canadian developers.

"Europe is determined to contribute to this global common good but it also means business," said von der Leyen.

European leaders are under pressure as their vaccination efforts lag behind those in the United States, United Kingdom and Israel.

In Canada, the reduction in deliveries has forced most provinces to slow their vaccine programs, in many cases cancelling second-dose appointments, and not booking new appointments for first doses.

Several European countries, plus Bahrain, Saudi Arabia and Mexico, are slowing vaccine injections because of a reduced supply. Italy is threatening to sue Pfizer and AstraZeneca for the delays.

Pfizer makes its vaccine only in Michigan and Belgium. The Michigan plant in Kalamazoo only supplies doses to the United States, while the rest of the world is to get its doses from Belgium.

Pfizer has promised to restore its deliveries to Canada after Feb. 15, and send more doses than previously promised to hit its contractual obligation to get to four million doses by the end of March.

Canada is also supposed to get two million doses from Moderna before the end of March, and then 20 million total doses from the two between April and June.

Health Canada is reviewing applications from two other vaccine makers, AstraZeneca and Johnson and Johnson, but it remains unclear when they will be approved.

Canada has contracts to get at least 20 million doses from AstraZeneca and 10 million from Johnson and Johnson if they're approved for use here, but it's not clear when.

Canada has no ability currently to produce COVID-19 vaccines but Trudeau has insisted repeatedly that Canada will get enough vaccine doses for all Canadians who want it by the end of September.

This report by The Canadian Press was first published Jan. 26, 2021.

Pfizer-BioNTech vaccine doses will not be shipped to Canada next week: Fortin