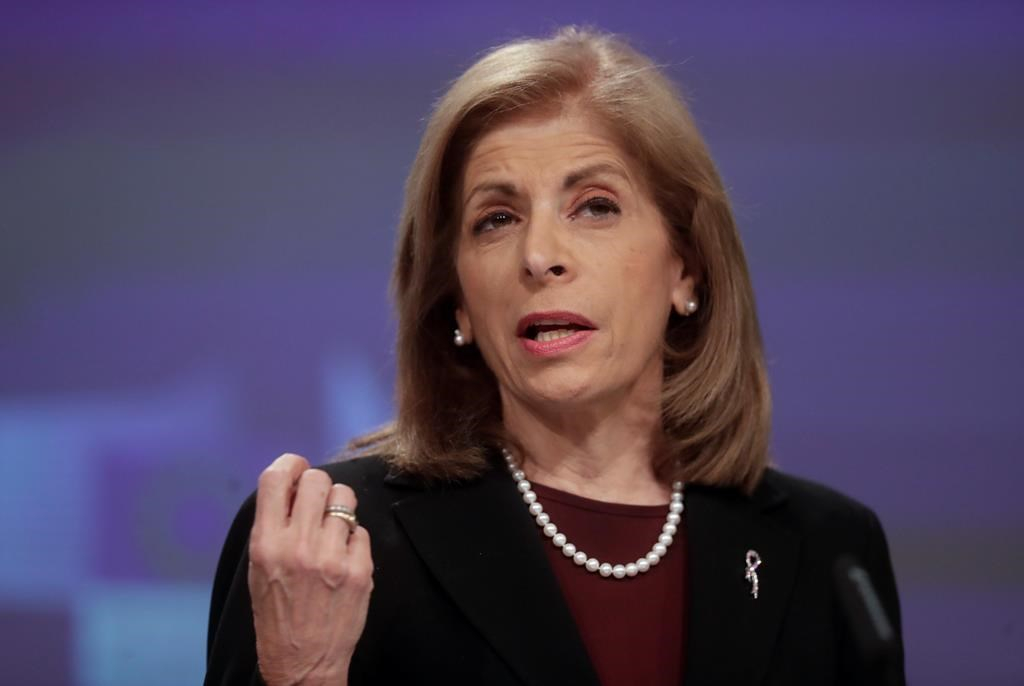 The European commissioner in charge of health, Stella Kyriakides, speaks during an online press conference on AstraZeneca at European Commission headquarters in Brussels, on Jan. 27, 2021. Photo by The Associated Press/Olivier Hoslet/Pool
Previous story
Next story

The Trudeau government is being urged to follow the tough talk of Europe's health minister, who Wednesday accused a vaccine company of not living up to its moral and legal obligations because of delivery delays.

Vaccine maker AstraZeneca was the recipient of the scathing message from Stella Kyriakides, European commissioner for health and food safety, during a briefing in Brussels. The company has said there will be a significant shortfall in the 100 million doses of its vaccine the European Union was expecting this winter.

"Not being able to ensure manufacturing capacity is against the letter and the spirit of our agreement. We reject the logic of first-come, first-served. That may work at the neighbourhood butcher's, but not in contracts, and not in our advance purchase agreements," said Kyriakides.

Kyriakides also said the EU is in continuous discussions with Canada and its fellow G7 countries, and will not will not block European exports of vaccines to other countries.

"Let me be absolutely clear the European Union is not imposing an export ban on vaccines or restricting the export of vaccines to third countries."

Prime Minister Justin Trudeau said Wednesday that he spoke earlier in the day with the European Commission President Ursula von der Leyen and "was reassured to hear that the transparency measures taken by Europe will not affect Pfizer and Moderna deliveries to Canada."

But in the meantime, Canada faces a sharp decline in deliveries from Pfizer this month.

Trudeau said he is very confident after recently speaking with the heads of Pfizer, Moderna and AstraZeneca that all promised doses will arrive on schedule. But Trudeau would not explain why he believes that.

Lawrence Herman, a veteran international trade lawyer and former Canadian diplomat, said Kyriakides is setting an example for the Trudeau government to follow in pushing European big pharma to live up to its promises to Canada.

Herman said Kyriakides was delivering "an extremely tough and in some ways threatening statement, weighing in with the full resources of the EU and its members." He said it was "something clear and direct for our own ministers to emulate."

Kyriakides told a press briefing that European officials are not satisfied with the information they are getting from AstraZeneca, and she left no doubt that niceties would be left outside the door of a meeting with the company later Wednesday.

"Now, let me be crystal clear: The 27 European Union member states are united that AstraZeneca needs to deliver on its commitments in our agreements. We are in a pandemic. We lose people every day. These are not numbers. They're not statistics. These are persons with families, with friends, and colleagues that are all affected as well," Kyriakides said.

Kyriakides said the EU's advance purchase agreements made it clear that suppliers needed to have all the manufacturing capacity in place to deliver the doses of the promised drugs. She rejected AstraZeneca's argument that it perhaps had wiggle room because it had signed a "best-effort" clause as part of the agreement.

Asked at the briefing whether she had been in contact with partner countries such as Canada and South Africa, Kyriakides said: "We're in continuous contact with our global partners. And through the G7, and I work very closely, of course, with (the World Health Organization)."

She said Europe was not contemplating export controls on vaccines but was instead focusing on a "transparency mechanism" that was clearly aimed at pharmaceutical companies.

"What it will do is bring clarity on the production capacity of manufacturers, the number of doses … which doses are sold to which countries including the EU 27."

Canada and the European Union have signed a much-vaunted free-trade deal in goods and services known by the acronym CETA.

But Herman said nothing in the deal could have anticipated the current challenges posed by the pandemic. That means "running to trade lawyers" and filing complaints under the existing trade rules is a non-starter.

"That doesn't mean Canada shouldn’t remind the Europeans of their CETA obligations. Although, there are off-ramps under CETA ... allowing trade restrictions in times of emergency," said Herman.

"The only practical route is on the ground. The means working with the EU and the companies to find a solution that gets Canada what it needs."

Vaccine deliveries to Canada could be subject to European export controls