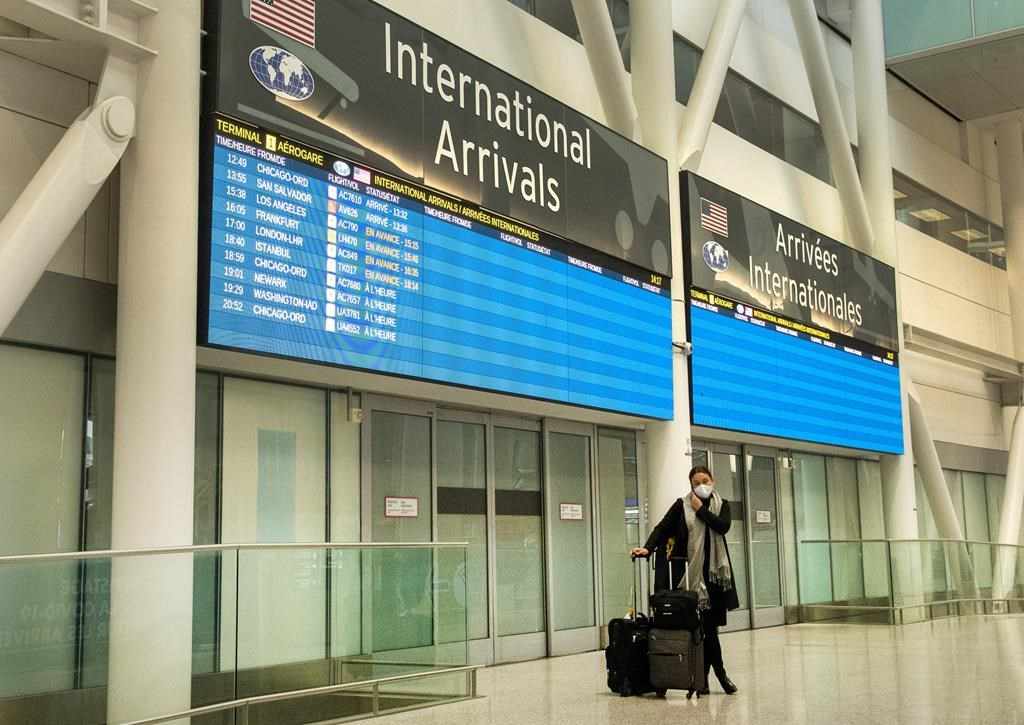 A lone passenger stands outside the International Arrivals area at Pearson Airport in Toronto on Tuesday, Jan. 26, 2021. File photo by The Canadian Press/Frank Gunn
Previous story
Next story

While travel exposures account for less than two per cent of all Canada's COVID-19 cases, the number of cases in recent travellers, and people they came into close contact with after arriving, shows continual growth in recent months.

In the first three weeks of January, 384 travel cases and 607 traveller-contact cases were confirmed.

The figures also correspond with a recent rise in the number of people travelling, at least by air. Land-border arrivals are typically fewer in the winter because of the weather in much of the country, but more people arrived from the U.S. by air in December than any month since March. Arrivals from other international locations were higher in December than any month except August.

Reports of notable Canadians ignoring pleas not to travel during the pandemic in favour of sun-kissed days on foreign beaches angered much of the country in the weeks after Christmas, and led to several high-profile provincial and federal politicians and health officials being fired, demoted or reprimanded.

Prime Minister Justin Trudeau has been promising for more than a week that the government will bring in stronger measures for international arrivals, as Canada fears the impact of new variants of COVID-19 that have arisen in other countries.

That is on top of a mandatory two-week quarantine for all arrivals, which has been in place since last spring, restricting international flights to just four airports, and a more recent requirement for foreign travellers to provide proof of recent negative COVID-19 tests within three days of boarding planes to Canada.

A spokesman for Health Minister Patty Hajdu said "Canada has some of the strongest border measures in the world" and all future measures will be guided by both science and evidence. Cole Davidson said 6,500 phone calls are made daily to verify travellers are in quarantine, and that 99 per cent of nearly 50,000 checks on quarantine made by police have found people are where they are supposed to be.

There are more than 50 cases of the new coronavirus variants from the United Kingdom and South Africa now confirmed in Canada, most, but not all of them, in people who recently travelled into Canada from those countries. The variants are believed to spread more easily, and in recent days concerns have arisen about whether they are more likely to cause serious illness or death.

Conservative Health Critic Michelle Rempel Garner said while community spread within Canada still accounts for the vast majority of this country's cases, Canada has to do more at the borders. She said the most effective option is to impose a mandatory rapid COVID-19 test on all arrivals, and have that test repeated midway through the two-week quarantine period.

Rempel Garner said Canada can't "hermetically seal" our border as island nations like New Zealand have done, so testing all travellers for the virus, screening them all for the variants, and maintaining the quarantine would be effective and more efficient than requiring travellers to quarantine at a hotel for two weeks at their own expense.

Similar rules have been in place in Iceland for months. Singapore began requiring testing at all airports on Jan. 24, along with using drones and electronic surveillance to monitor people in quarantine.

NDP Leader Jagmeet Singh said a trend in more travel-related cases is "alarming" and that Trudeau can't wait any longer to act to stop it.

"With the catastrophic situation we are in, we cannot afford a spike because of non-essential travel," Singh said.

Michelle Rempel Garner should put her MAGA hat on again so we know who she really is when she comments on such things.