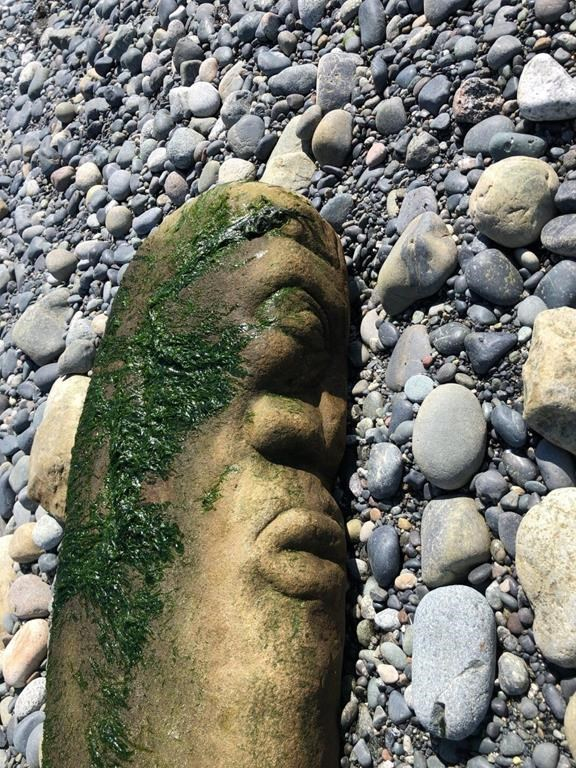 A carved stone pillar is shown on the beach in Victoria in this July 2020 handout photo. Handout photo by The Royal BC Museum/Bernhard Spalteholz
Previous story
Next story

The chief of a First Nation says he has the assurance of the Royal B.C. Museum that steps will be taken to determine how a carved stone pillar was deemed an Indigenous artifact perhaps dating back to the 1800s before a local man claimed it as his creation.

Ron Sam, chief of the Songhees First Nation, said in an interview he spoke with museum CEO Jack Lohman about the pillar that was found covered in algae last July along a beach below Beacon Hill Park in Victoria.

In a statement, Lohman said the museum's Indigenous collections and repatriation department has been working closely with both the Songhees and Esquimalt First Nations to review and update its policies and procedures, "particularly with respect to historic works that surface or are excavated as part of local development projects."

Sam said the museum called him on the day the 100-kilogram carving was hauled from the beach by the museum's archeology curator and two other men who used a refrigeration dolly to move it.

The pillar was recently featured on a local news station before it would be displayed, Sam said.

But doubt was cast on the find when a local artist came forward to several media outlets claiming ownership, saying he had photos of the piece he'd been carving on the beach before it disappeared.

"Somewhere, somebody in the museum made the determination that yes, it's 110 per cent a First Nations artifact," Sam said.

Elders would have provided input into the find but have not been able to see it at the museum due to pandemic restrictions, he added.

"We haven't engaged First Nations elders yet because we didn't know exactly what we were dealing with," he said.

"It's in the museum's hands to work with the individual and determine how the conclusion was made."

Grant Keddie, the museum's archeology curator, did not wish to discuss the pillar.

Last week he said it might have stood near the edge of a cliff above the beach and may have come down in a landslide. He also said it could be the same one mentioned by Lekwungen elders to German-American anthropologist Franz Boas in the late 1800s.

Lou-ann Neel, acting head of the museum's Indigenous collection and repatriation department, said news of the carving also came to light on Keddie's blog, which she decided should be removed from the museum's website for now.

"We were sharing some good news stories that we have with the Songhees and the Esquimalt people," she said.

Chiefs of both First Nations saw the pillar separately at the museum in September and seemed to suggest it could be related to other locally found items, though it was still partly covered in seaweed so its features may have been hard to identify, she said.

"We realized we probably should have waited until we talked with the elders, but based on the initial feedback from the chiefs we're also confident that this was from their traditions and that elders could verify it, that we would continue to do the work until we knew that for certain," Neel said.

Keddie has worked with the First Nations for many years and seemed to have good reason to suggest the pillar was from the territory, she said.

"Just the shape of the pillar itself is indicative of the kind of stone that was created in this area," she said, adding photos will be taken to the elders before they can see it at the museum.

— By Camille Bains in Vancouver.