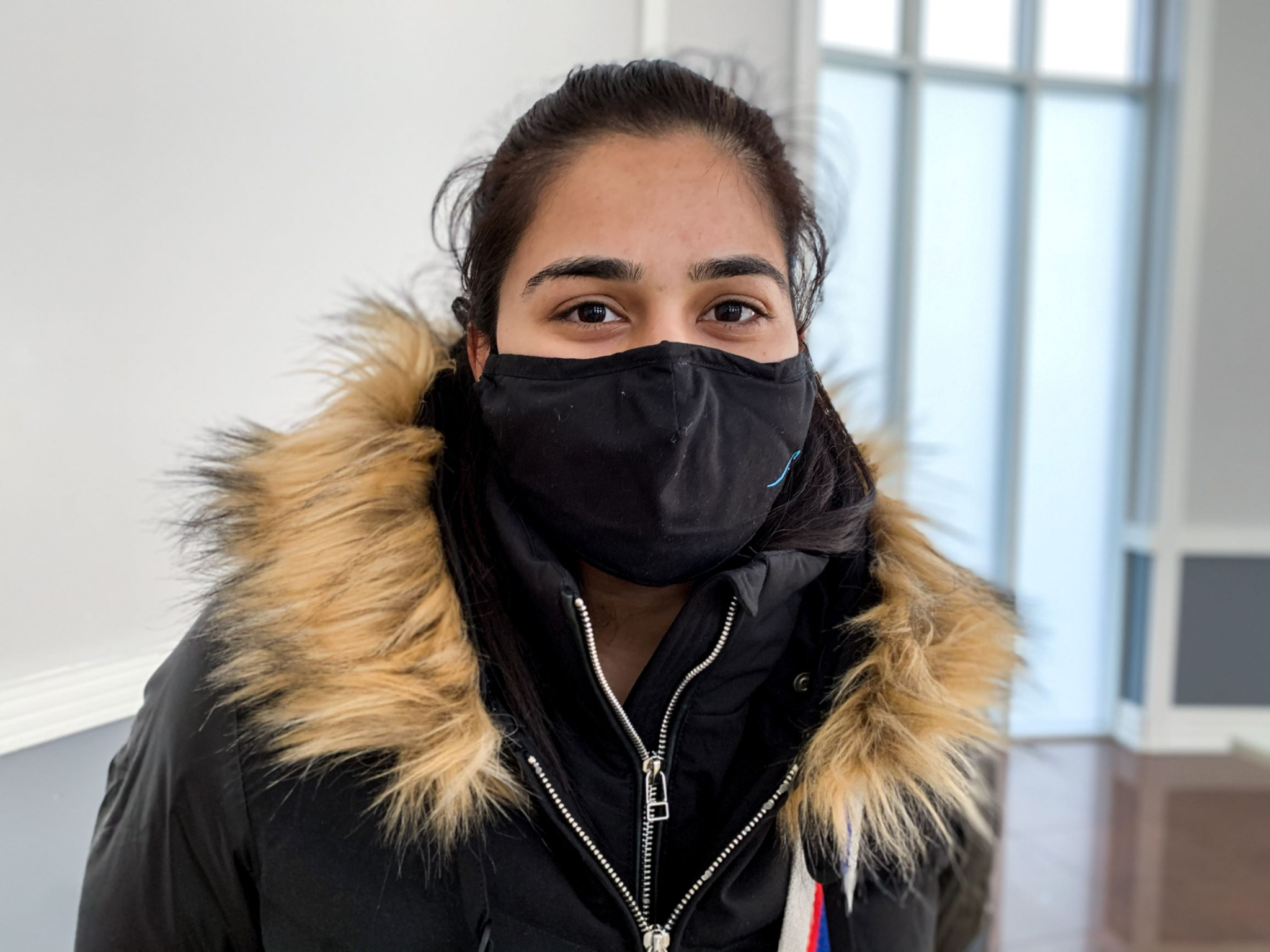 Monika Bhatoe found out from her mother about a new Brampton testing centre offering services geared to the city's South Asian population. Photo by Ahmar Khan
Previous story
Next story

The Embassy Grand used to be one of Brampton’s busiest wedding halls and event venues, but these days, it operates as a COVID-19 testing centre. The hall, once bursting with loud music and fancy dresses, has been transformed into a quiet and safe testing centre for the city’s large South Asian population.

On Saturday afternoon, Monika Bhatoe was standing in line awaiting the opportunity to be tested after her mother, a native Punjabi speaker, told her where she could get tested.

“She saw a poster at the grocery store and read it in Punjabi and she told me where to go,” she said. Having signs in Punjabi helps, says Bhatoe, pointing out there is a communication gap and, oftentimes, nuance missing from the English COVID-19 messaging coming from the province.

And that can spell disaster in an area that has the third highest test positivity rate in the country, at 17 per cent. The new testing centre is currently conducting 300 tests a day, and the positive test results range from 20 to 30 per cent.

There are many reasons for the inordinately high case numbers. Living situations for South Asians in Brampton are unique; it’s common for three or four generations to reside under one roof and for multiple international students to occupy a basement. The neighbourhood is also home to many low-wage employees and labourers whose occupations put them in close contact with people, placing them at higher risk.

Bhatoe, who lives with her family in a multi-generational home, said her mother and grandmother don’t speak English. Her father does but prefers to speak his native tongue of Punjabi. She said it’s important to give people information in the language they are most proficient in speaking.

“If they don’t understand something, it looks like they’re not following the rules, but they just aren’t properly informed. If it’s in their language, they have a better understanding of the protocols,” said Bhatoe. The testing centre now has literature written in Punjabi, which Bhatoe mentioned she would take home to her parents.

The centre could not have opened at a better time, as Ontario’s cases have continued to rise during the pandemic’s the second wave. Now, for the first time in 10 months, those who aren’t proficient in English can access medical help in a place where staff offer services in Urdu, Hindi, Punjabi and English.

“It’s not just the testing, people are coming out with information on how to isolate, where they can go stay; we pride ourselves on educating people,” said Dr. Raj Grewal, medical director at Brampton's new #COVID19 testing centre.

“We have South Asian people who work here, physicians, nurses that can talk to our population in their own language to help them properly understand,” said Dr. Raj Grewal, the medical director at the Embassy Grand COVID-19 testing centre.

An emergency physician, Grewal grew up in the area, and several months ago, he and other physicians, health experts and community leaders in Brampton gathered to address some of the misinformation and problems persisting in the South Asian community during the pandemic.

Along with Dr. Simerpreet Sandhanwalia, an emergency physician, the duo co-founded the South Asian COVID Task Force in November to ensure proper messaging was getting out to the community. It was right before Diwali, a religious holiday that is the equivalent of Christmas for Sikhs and Hindus. There were concerns about large gatherings to celebrate, and the task force was able to disseminate information advising people to stay home.

It sent out key health messaging from the province to South Asians in Bengali, Gujarati, Tamil, Urdu, Punjabi, Malayalam and Hindi. The messaging also informed people about how easy it was to get tested and laid out all the restrictions in place at the time. The information was sent out through WhatsApp messages and videos on social media as opposed to traditional mainstream media.

The testing centre opened Jan. 22 in the heart of Brampton’s South Asian community. Between the multilingual staff and the fact sheets printed in many languages, Grewal said they are successfully bridging the information gap.

“We saw a need in our community with respect to getting clear and concise messaging out to our community that was not happening,” he said.

The opening of the testing centre has been applauded by Brampton Mayor Patrick Brown and medical officer of health Dr. Lawrence Loh.

“We are excited that this testing facility will help efforts to control transmission among the South Asian community in our region ... This centre helps reduce barriers to testing and supports our continuing efforts to engage this community in an impactful way,” Loh wrote in a press release.

“Knowledge is power, so being able to empower our community to know what's happening and what's going on is a benefit that is immeasurable,” said Sandhanwalia.

“It’s not just about testing, but to prevent further disease progression,” she said.

The testing centre always has a physician on hand. When Grewal isn’t there, he hands the reins to Dr. Priya Suppal, a family doctor of 26 years, who oversees staff and ensures that everyone coming in for a test leaves with the necessary followup information. As visitors walk in, they’re asked about symptoms, checked in and then directed to a line to get tested. Before the test, a nurse walks them through the process, step by step.

Following the nasal swab, visitors are given written material indicating how long they need to quarantine, a medical note signed by one of the physicians for work purposes and contact information for isolation centres and other wraparound services.

“It’s not just the testing, people are coming out with information on how to isolate, where they can go stay; we pride ourselves on educating people,” said Grewal.

While she was there just to get a simple test, Bhatoe said the learning resources in Punjabi and information provided by staff was essential, and would be even more helpful to her parents and grandmother, who she said would likely be coming to get tested in the next few days.

“It’s really convenient for them; they’re going to be more comfortable coming to get tested and asking any questions,” said Bhatoe.

While Public Health Ontario has created a lot of information, including fact sheets in different languages, it has been a struggle to get them in front of the right audience. During her time leading the task force and seeing its successes, Sandhanwalia said she hopes the province involves more racialized people in the future.

“Going forward, I think that different levels of government will recognize that you do need a community voice to have a position at the table when it comes to messaging, policies and resource allocation,” she said.

Grewal is hoping to build on the success of the testing centre. He’s now talking to Public Health Ontario about opening up the remaining two-thirds of the banquet hall and converting it into a mass vaccination site. Run as a 24-7 operation, opening the hall could result in as many as 2,000 people a day being vaccinated.

The task force, in partnership with McMaster University, have created a survey to better understand what is believed to be a higher hesitancy to get vaccinated among members of the South Asian community. They say there is a lack of trust in public health, and they’re hoping to use the survey as an opportunity to quash misinformation and ensure everyone in their community understands the benefits of being inoculated.