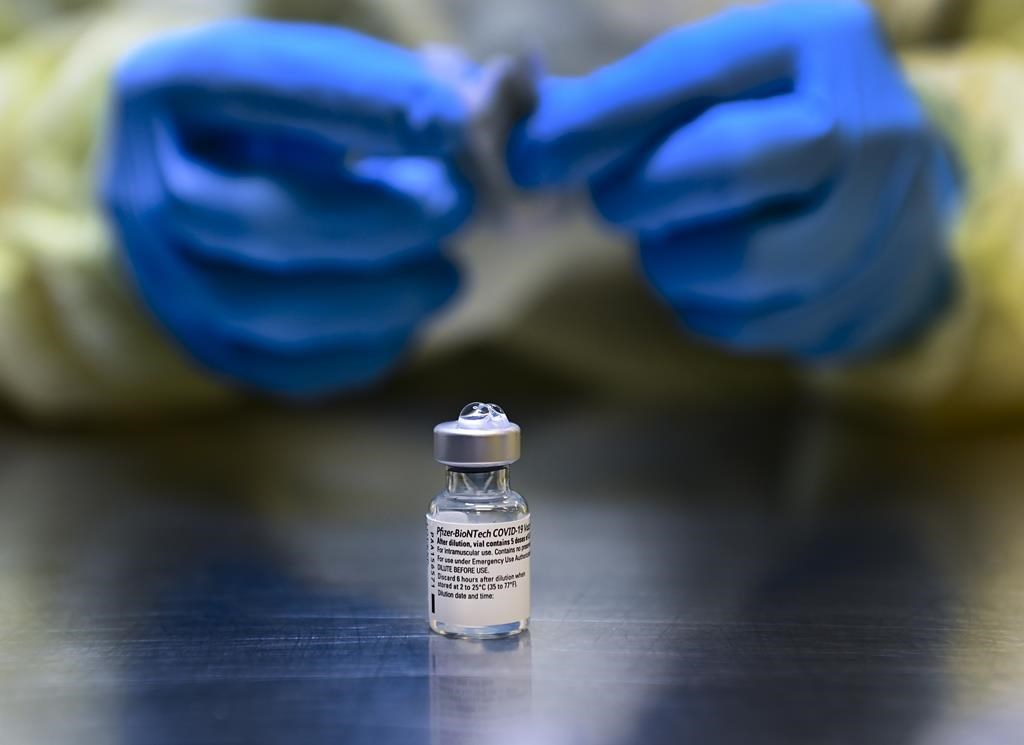 A health-care worker prepares a dose of the Pfizer-BioNTech COVID-19 vaccine at a UHN COVID-19 vaccine clinic in Toronto on Thursday, Jan. 7, 2021. File photo by The Canadian Press/Nathan Denette
Previous story
Next story

OTTAWA — Prime Minister Justin Trudeau announced a tentative deal Tuesday with U.S. vaccine-maker Novavax to produce its product in Canada if the COVID-19 vaccine gets approved for use here.

"This is a major step forward to get vaccines made in Canada, for Canadians," Trudeau said.

But the agreement isn't going to ease pressure on the government to get vaccines into Canada, because Novavax first has to get its vaccine approved, the National Research Council has to finish building a new facility in Montreal where the doses will be made, and that facility has to be certified to make the vaccines.

Novavax applied Friday for regulatory approval in Canada but is still finishing its clinical trials and doesn't expect to have the final data available for that review for a month or two at least. The NRC facility is going up at lightning speed, said Industry Minister François-Philippe Champagne, but it won't be finished until late summer.

And then it will take a month or two, said Champagne, for the facility to be certified.

"At the end of the year we will be a position to be producing vaccine," said Champagne.

Currently Canada is reliant on Europe for all its COVID-19 vaccine supply, a situation that's becoming treacherous because the European Union has new export controls on COVID-19 vaccines to try to protect its own deliveries.

Trudeau said the oral promises he received from European Commission President Ursula von der Leyen that Canada's deliveries won't be stopped by the new controls, "were enough" to reassure him.

This week's shipments of vaccines from Pfizer-BioNTech and Moderna are both starting to arrive in provincial receiving locations already, said Procurement Minister Anita Anand.

Canada's shipments have been delayed or reduced by production slowdowns, but Trudeau said the promised four million doses from Pfizer and two million from Moderna are still expected to arrive by the end of March, and 40 million from each by the fall.

The prime minister announced a tentative deal Tuesday with U.S. vaccine-maker Novavax to produce its product in Canada if the #COVID19 vaccine gets approved for use here.

If Canada's deliveries aren't interrupted, Canada's plan is to have most Canadians vaccinated by the end of September, before the new Canadian production of Novavax's product even starts.

Trudeau said Canada has to look beyond the current vaccine plan.

"As we see new variants rising, we see a virus that will continue to be present in many places around the world," he said.

In addition to the Novavax prospect, Trudeau said the Vaccine and Infectious Disease Organization at the University of Saskatchewan is ready to produce about 40 million vaccine doses a year, though there is no contract yet in place for a particular vaccine to be made there.

Precision NanoSystems in Vancouver is building a new vaccine facility that will be the first in Canada capable of making the messenger RNA vaccines currently being used in Canada. That facility won't be finished until 2023.

Canada has a contract to buy 52 million doses from Novavax, which has shown promising results. Results from a Phase 3 trial — typically the last before a product is approved for wide use — in the United Kingdom published last week showed significant effectiveness against both the original virus behind COVID-19 and the variant known as B.1.17 that was first identified there. A smaller Phase 2 trial in South Africa showed the vaccine was also effective against a variant that first emerged there, known as B.1.351.

If it is approved by Health Canada, some doses will still have to be imported, because the new facility in Montreal is equipped to make only about two million doses a month.

The Pfizer-BioNTech and Moderna vaccines have shown potential in lab tests against the variants, which are believed to spread more easily and may cause more serious illness. However, the trials that led to those vaccines' being approved were completed before the variants had been identified.

More than half the COVID-19 cases identified in Novavax's British trial were the B.1.17 variant and 90 per cent of the cases in South Africa were B.1.351.

The federal Department of Innovation, Science and Economic Development and the National Research Council have been in talks with all the front-running vaccine makers in the world for months, trying to lure at least one of them to make some of their vaccines at the new facility, which is on track to be finished this summer.

None of those talks have borne any fruit until now.

Opposition leaders welcomed the news but said the government needs to be far more transparent about this deal, what negotiations are underway with other manufacturers, and when vaccines will start to be delivered from the Canadian plant.

"Canadians should know when things are going to get better," Conservative Leader Erin O'Toole said in a statement.

NDP Leader Jagmeet Singh urged the Liberals to make public all the vaccine contracts with the seven companies with which Canada has a deal to buy COVID-19 vaccines.

"This is a good step forward but it is very late," said Singh. "This is something that should have been secured a long time ago. It would have addressed a lot of the insecurity people are feeling about not getting the vaccine and seem delays in the rollout, because of production delays."

Canada used to have a strong domestic vaccine industry. Federal records show in 1973, Canada relied on imports for only about one-fifth of its domestic pharmaceutical requirements including both vaccines and therapeutic drugs.

But the industry began to dry up in the 1980s, with multiple firms closing their Canadian operations, including AstraZeneca, Bristol Myers and Johnson and Johnson.

Today, Canada relies on imports for at least 85 per cent of the vaccines and other pharmaceuticals it uses.