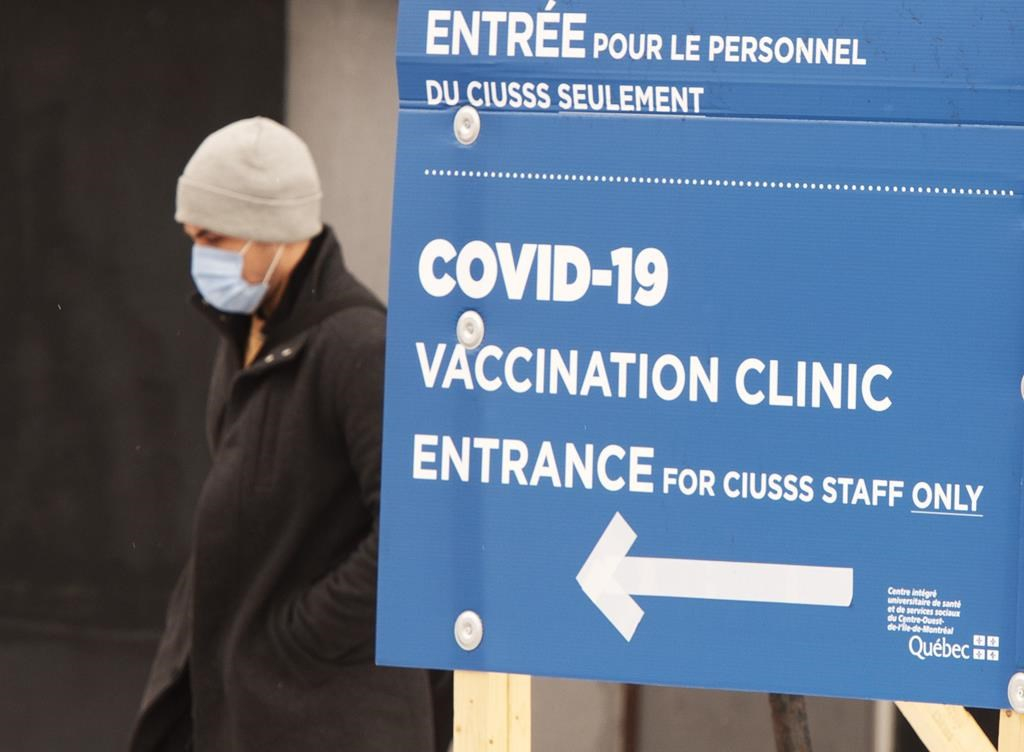 A man walks past the COVID-19 vaccination site at Maimonides long term care facility on Wednesday, January 13, 2021 in Montreal. File photo by The Canadian Press/Ryan Remiorz
Previous story
Next story

The Ontario government implemented the measure at Toronto's Pearson International Airport as a stopgap while waiting for a similar federal program announced last week to get off the ground. Premier Doug Ford has praised Ottawa for announcing a new testing plan but said Ontario will conduct its own traveller testing until the federal program kicks in.

Canada's chief public health officer said new COVID-19 cases have been trending downward across the country in recent days, but she is warning it's crucial to keep strong measures in place to maintain the tendency.

"With still elevated daily case counts and high rates of infection across all age groups, the risk remains that trends could reverse quickly, and some areas of the country are seeing increased activity," Theresa Tam said in a statement.

Quebec reported fewer than 1,000 daily COVID-19 infections Monday for the first time since early November, while Ontario reported 1,969 cases due to what Health Minister Christine Elliott describes as a data catch-up that includes some previously unreported cases.

But authorities have said the reports of a contagious variant spreading in parts of Ontario as well as a slowdown in national vaccine deliveries justify the need for tough new travel restrictions.

Ontario has recorded dozens of cases of the U.K. variant of COVID-19, and on Monday it reported its first case of a variant that emerged in South Africa late last year. A small number of cases have already been confirmed in other Canadian provinces, including Alberta and British Columbia.

The province's chief medical officer said the case was found in Peel Region in a person who did not have a known history of travel or any known contact with someone who has travelled.

Both York Region and Toronto Public Heath reported new cases of the U.K. variant on Monday, including two linked to an outbreak at a meat processing facility.

Canada's new travel rules, expected to take effect soon, include a requirement that inbound travellers spend the first three days of their quarantine at a supervised hotel and take a COVID-19 test at their own expense.

The rules are causing "anxiety and frustration" for Canadians currently abroad, according to Evan Rachkovsky, a spokesman for the Canadian Snowbird Association.

He said the group is supportive of mandatory COVID-19 testing at points of entry but is opposed to the hotel quarantine measure, which is expected to cost travellers about $2,000 each.

He said there are other unanswered questions, including whether the rules will apply to land crossings and whether travellers’ pets will be accepted at the government-approved hotels.

Prime Minister Justin Trudeau announced last week that Air Canada, WestJet, Sunwing and Air Transat had agreed to suspend service to Mexico and the Caribbean as of Sunday. The restriction will last until April 30, and Trudeau said the airlines will help arrange the return of customers currently outside the country.

Spokespeople for Air Canada and WestJet confirmed that the airlines were operating one-way flights from those destinations for the next week or two to help people get home.

Aviation experts have warned that the suspension of flights could have widespread repercussions for Canada’s beleaguered airline sector and force permanent closures for airports and travel agencies.

Mary Ng told MPs that Canada has been promised multiple times, including by the president of the European Commission and the trade and health commissioners, that Canada's vaccine shipments will continue as expected.

However, she said those promises have not been put in writing and acknowledged the export controls are "concerning."

All Canada's doses of the COVID-19 vaccines from both Pfizer-BioNTech and Moderna are made in and shipped from Europe. Both companies have recently announced slowdowns in their vaccine delivery schedule due to production delays.

At least three other companies, Novavax, Astra-Zeneca and Johnson and Johnson, have launched the process of having Health Canada approve their vaccines.

The death toll from the pandemic showed little signs of abating Monday, a day after Canada crossed the threshold of 20,000 deaths. Ontario reported another 36 deaths, Quebec reported 32, Manitoba had three and two people in Saskatchewan died from the virus.

With files from Holly McKenzie-Sutter and Mia Rabson

Trudeau urges Canadians to cancel trips in and out of Canada