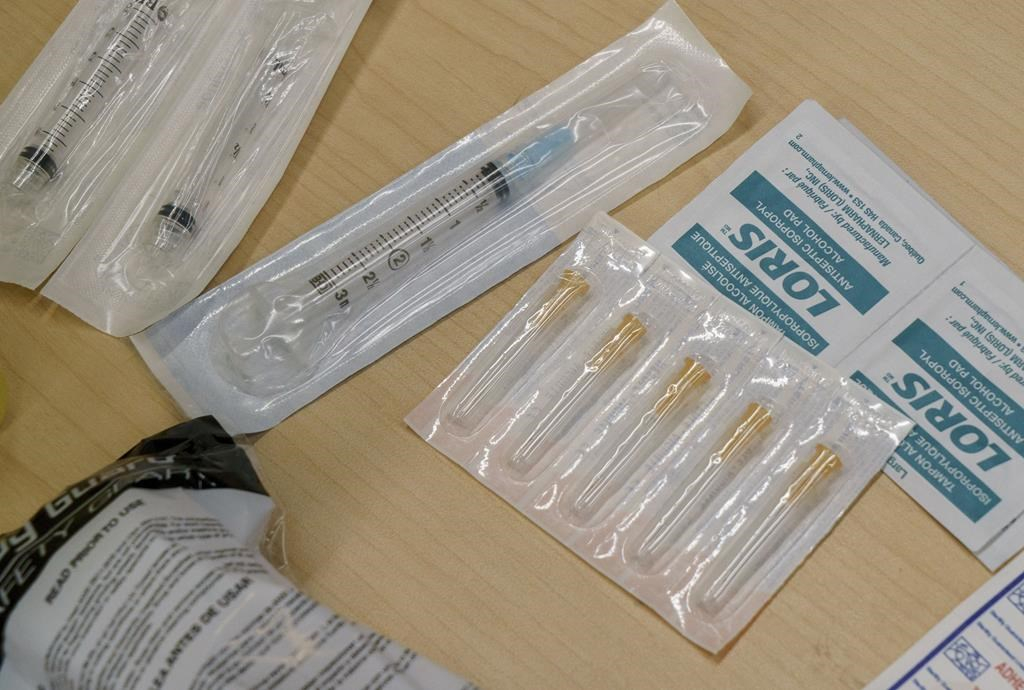 A vaccination kit is seen during the setting up of a vaccination clinic in Montreal, on Monday, Feb. 1, 2021. THE CANADIAN PRESS/Paul Chiasson
Previous story
Next story

MONTREAL — Experts say delaying the second dose of some COVID-19 vaccines could lead to the emergence of new variants of the virus — but there's no sign it has happened yet.

"It's a theoretical, realistic possibility, but there is no evidence so far," said Dr. Andre Veillette, a professor at the Universite de Montreal and the director of the Molecular Oncology Research Unit at the Montreal Clinical Research Institute.

Veillette, who is a member of the federal government's COVID-19 vaccine task force, said there's a concern that the immunity provided by one dose of the Pfizer-BioNTech and Moderna vaccines "is not as strong as you would get with two doses."

That weaker immune response, especially in older people whose immune systems don't respond as well to vaccines, "may favour the selection of variants," Veillette said in an interview Wednesday.

Arruda has said he does not want the delay between shots to exceed 90 days — which would take the province well beyond the period recommended by vaccine manufacturers and the 42-day window recommended by the federal government's National Advisory Committee on Immunization.

Dr. Caroline Quach, the chair of the committee, said in a recent interview that "there is a theoretical risk that if transmission is occurring at a higher rate in people who are partially vaccinated, or partially protected, with a very low protection, that variants could then develop that are going to be harder for vaccines to tackle."

The committee judged that wasn't a problem, because people should have sufficient protection in the first few weeks after they get vaccinated.

But, she added, "we might be wrong." Without enough vaccine or enough data, the advisory committee is trying to make "the best educated guess."

While Veillette said there is evidence the protection provided by one dose of the AstraZeneca vaccine — which has not yet been approved for use in Canada — lasts for more than three months, it's a different type of vaccine than those developed by Pfizer and Moderna.

Experts say delaying the second dose of some #COVID19 vaccines could lead to the emergence of new variants of the virus — but there's no sign it has happened yet.

Jorg Fritz, an immunology professor at McGill University, said, "it's absolutely a possibility" that suboptimal vaccination protocols could lead to increasing variants of COVID-19. He said he's also worried that variant generation will happen among people who have chronic symptoms from COVID-19, so-called "long COVID."

But Fritz said that his greatest concern around delaying the second shot is that the single dose won't be effective enough and that people will think the vaccine doesn't work.

For Veillette, the biggest fear around the emergence of new variants isn't the vaccine delay but the continuing spread of the virus around the world.

When the virus replicates, there's a chance it will mutate, he said. While some of those mutations may be harmless — or even make the virus less infectious — some could make it more effective at infecting people.

"The more it is transmitted from one person to another, the more time elapses, the more you will get those mutations and the mutations that are advantageous for the virus," he said.

That's why it's important to ensure that people around the world — and not just those in wealthy countries — are properly vaccinated, he said.

"I think it's a mistake to think that because Canadians, or Americans or Europeans get well-vaccinated before others that this is going to make this disease go away and it's going to prevent these people from having infections again," he said.