UCP co-founder to Jason Kenney: 'Fire yourself' from intergovernmental post 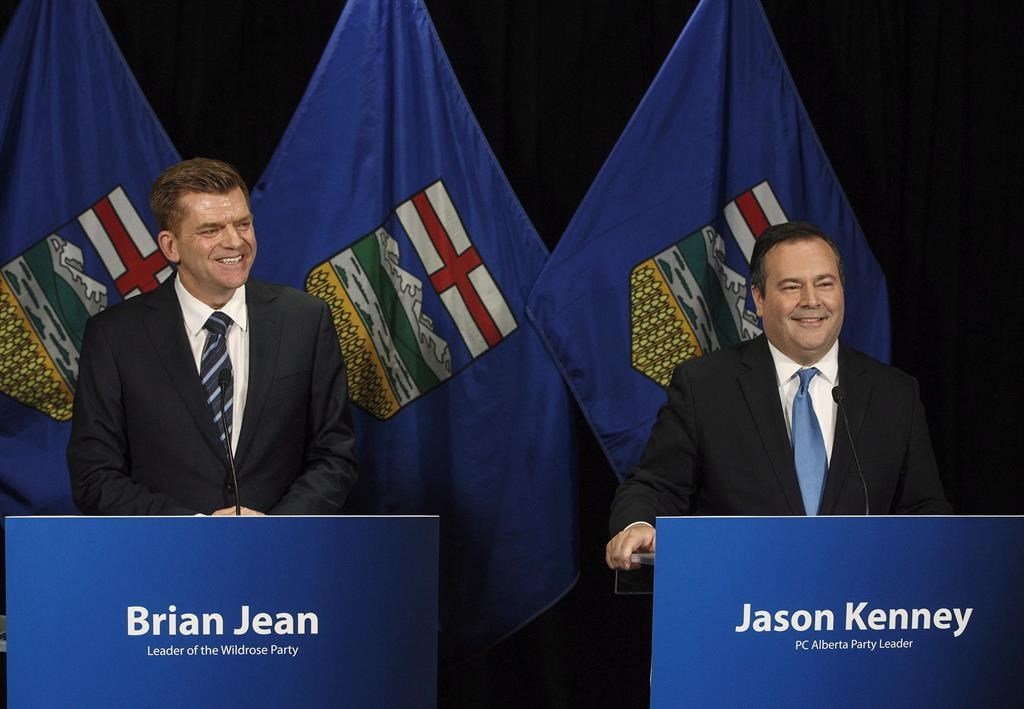 EDMONTON — Alberta Premier Jason Kenney is getting some unsolicited advice from the co-founder of the United Conservative Party: fire yourself as the intergovernmental affairs minister.

Brian Jean says Kenney’s “fight everyone” approach is not getting the job done for Albertans on critical issues, including energy and federal relations.

“Fire yourself as intergovernmental affairs minister and appoint a new one,” Jean wrote in a guest column published Wednesday by Postmedia.

“Ideally, we would use a ‘good cop, bad cop’ approach, and this (new) minister could be the good cop to assist you in negotiations.

“We are currently without a good cop, and we are missing out on co-operation from other governments.”

While Kenney is at it, said Jean, he could impart a softer diplomatic tone throughout his government.

“Those in your government too often pick fights with Albertans and others rather than asking them to help solve problems," he wrote.

“Albertans want the premier’s and ministers’ offices to be staffed by grown-ups who can be trusted to maturely address the issues facing Albertans.”

Jean helped create the UCP by joining his Wildrose party with Kenney's Progressive Conservatives. Jean ran against Kenney for the UCP leadership and lost.

“Albertans want the premier’s and ministers’ offices to be staffed by grown-ups who can be trusted to maturely address the issues facing Albertans,” #UCP co-founder Brian Jean wrote in a guest column published Wednesday by Postmedia. #ableg

Asked about Jean’s comments, Kenney said he hadn’t read the article, but noted: “It’s easy to sit on the sidelines and be an armchair quarterback as we make our way through these multiple crises at the same time.”

In answer to a similar question on CHED radio Kenney said: “We were elected to fight for this province’s best interests, not to sit back passively and let others determine our future for us.”

The premier — who once publicly dismissed Justin Trudeau as “an empty trust-fund millionaire who has the political depth of a finger bowl” — accused the prime minister of not fighting hard enough to change Biden’s mind and urged Ottawa to issue retaliatory trade sanctions.

He accused Biden of "insulting” Canada on his first day in office.

Kenney's government has also focused on what he has called shadowy global foes and environmentalists who he says are seeking to undermine Alberta's oil industry. He set up a $30-million-a-year "war room" and struck a public inquiry into foreign funding of oil opponents. Critics say both endeavours have been undermined by self-generated mistakes and controversies.

The government has been publicly tangling with doctors, teachers, academics and organized labour as it seeks to reform everything from pensions to health care to public-sector wages.

Also Wednesday, Kenney responded to a call from UCP caucus member Drew Barnes for Alberta to hold a referendum on independence as a message to Ottawa to take seriously the province's concerns about energy development and revenue-sharing.

“Ottawa has to be 100 per cent aware of the consequences of not giving Albertans resource movement and a fair deal,” Barnes said in an interview.

“Albertans everywhere, every day, are telling me the desire to stand up to Ottawa is stronger than ever.”

Kenney said UCP founding documents make it clear the party is loyal to a united Canada.

“MLAs have a right to speak their mind, but this government will continue to fight for a strong Alberta within the Canadian Confederation,” he said.

This report by The Canadian Press was first published Feb. 3, 2021

Kenney surely does not

Kenney surely does not represent the views of most Albertans, does he?
Does anyone see the parallels between Kenney and his UCP cult followers to Trump and his Republican cult followers?
Kenney seems intent on aggressively doubling down on his destructive outdated fossil fuel policies, especially open pit coal mining on the Eastern Slopes in partnership with an Australian billionaire to whom he has granted coal leases, like a desperate dinosaur facing extinction while taking the majestic province of Alberta with him.
He must be stopped before he destroys the heart and soul of Alberta.

There aren't just parallels, there are strong organizational ties. Conservative election campaigns use Republican electioneers. Canadian political right-wing religion is largely branch plant denominations seeded in Canada by wealthy American churches; what isn't directly the result of missionaries seems to involve a shift of Canadian churches to mimic American church politics and media. Canadian right wingers get their information from American-dominated social media echo chambers, whose popularity derives in part from a good deal of funding, mainly from American billionaires.

I'd rather he fired himself

I'd rather he fired himself from the premiership of Alberta.

Well, it would certainly be a

Well, it would certainly be a good start!
Besides Kenny's pugilistic leadership, the other problem Alberta's UCP needs to address is their definition of Alberta's Best Interests. One gets the sense that Alberta's residents want something more realistic than the dead end fossil fuel dependence that seems to be the only pillar of the party's platform.

The guy from Ontario (Kenney)

The guy from Ontario (Kenney) who rode in on a white horse to save Alberta, who has made everything Alberta cringeworthy over the past year at least, definitely needs to fire himself. But, should he not do so, he will be fired by the people, at least if they have a smidgeon of memory left.

Jason Kenney does not hold a

Jason Kenney does not hold a copyright on angry, condescending, overheated rhetoric. Rachel Notley was his sibling as Alberta premier on the topic of the Trans Mountain pipeline expansion project.

Staff back then in the Burnaby Planning department will testify to the media treatment by Notley when it came to responding to their political class resisting a potential environmental catastrophe within city boundaries with respect to doubling the size of the bitumen tank farm storage facility on the south side of Burnaby Mountain, directly above thousands of homes, and the expansion of Westridge Terminal for tankers on the shore below the geotechnically unstable north side of the mountain.

Staff were further demeaned by being summonsed to a B-movie third degree treatment during the NEB hearings by an army of lawyers hired by TMX who repeatedly accused Burnaby of "holding up the permits." Burnaby responded by hiring its own excellent legal team to provide a 39-page submission for the NEB record that detailed how, in fact, it was TMX staff who held up the permit process by repeatedly failing to supply adequate engineering and legal documentation, which is a standard part of every permit application, large and small. Burnaby even went as far as to strike a special stand alone working group to accommodate the process. TMX personnel acted friendly and were all smiles across the table, but worked concurrently behind the scenes to undermine the permit process. TMX was its own worst enemy in that process, and they were caught.

The NEB hearings were nothing but a kangaroo court, a rubber stamp brigade of industry sympathizers who acted as expected.

Burnaby's political leadership was and remains strongly opposed to TMX, but know that that is not an excuse to hold up perfectly legal applications for permits. However, the Burnaby Fire Dept. has since then stated categorically that it will not respond to a tank farm fire, which they say is utterly impossible to put out. They will instead focus on protecting residents below the storage tanks as best as they can. Note that the original TM pipeline and tank farm were built over 60 years ago, long before Burnaby burst at the seams with growth pressures.

When Burnaby's NEB submission was referenced, even the most pro-TMX critics (e.g. Calgary Herald columnists) stopped blaming Burnaby. Even the Globe's Gary Mason, who otherwise had a good reputation, got it wrong on the accusations about Burnaby and stopped when he was emailed excerpts of its NEB submission. He never owned up to being part of the rumour echo chamber or failing to check facts on that topic.

Meanwhile, both Notley and Kenney continued to sing in harmony on oil. Shortly after the predicably automatic NEB approval (later shot down twice over inadequate Indigenous consultation) Trudeau enacted his tanker ban on BC's North Coast, something that Notley called "anti-Alberta." She didn't care to consider that her condescending rhetoric on the huge and still-unresolved concern by British Columbians about tanker safety and threats to the unique economy and marine ecosystem of the South Coast where 3.5 million people live would be so offensive, especially when exclaiming that the BC coast "doesn't belong to BC." It does (source: 1984 Supreme Court of Canada decision), but Notley implies that is it Alberta's to despoil.

Notley and Kenney have traded seats in the Alberta legislature, and display significantly different outlooks on governing style and policy, but not the facts that they continue to sing from the same fossil fuel hymn book, share a tendency to irrationally shoot fire from their mouths, and are insecure and reactionary about every little criticism, especially about oil dependency. Albertans are worse off for their leadership's willful blindness.