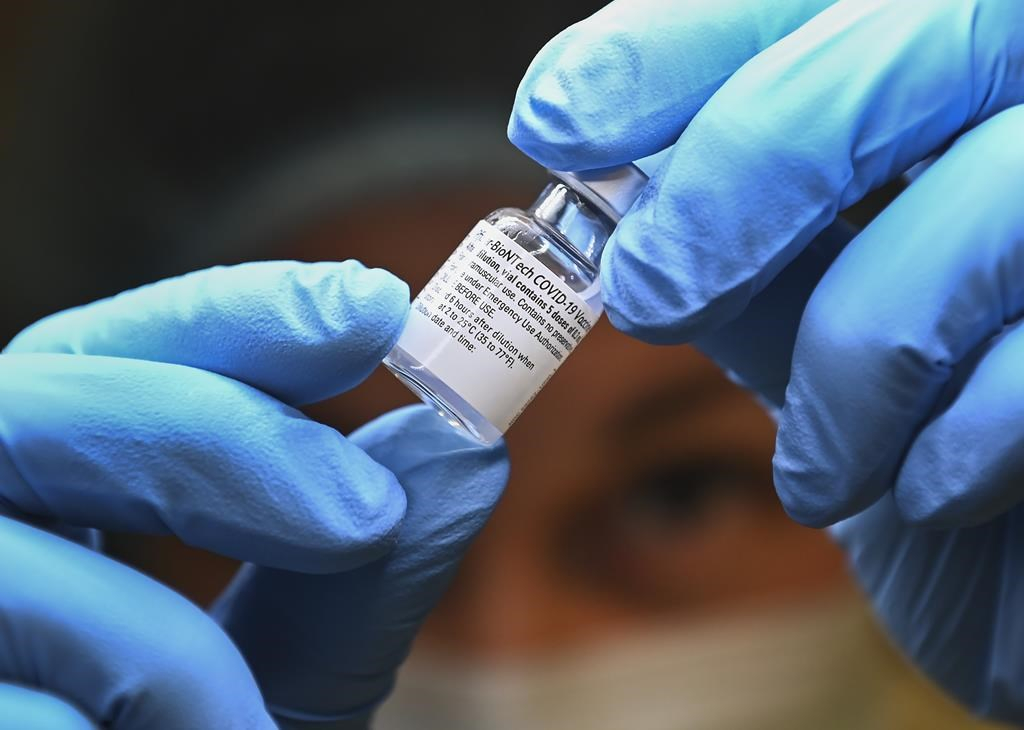 Procurement Minister Anita Anand said this week she is confident Canada's COVID-19 vaccine deliveries will only get better going forward but just hours after she made the remark, Canada's vaccine purchases got slammed again.

"The worst week was last week," Anand said in an interview with The Canadian Press Tuesday night.

But within hours of the statement, potential deliveries from the global vaccine-sharing initiative known as the COVAX Facility diminished and Canada learned the production problems that cut this week's deliveries from Moderna by 20 per cent are now going to affect the next shipment as well.

Moderna was to deliver almost 250,000 doses to Canada the third week of February. It hasn't said yet what the impact will be.

A spokeswoman for Moderna told The Canadian Press the company remains "on track" to meet its contract to supply two million doses of its vaccine by the end of March.

They are but the latest headaches for Canada's vaccine efforts, coming after supply constraints cut Pfizer-BioNTech deliveries by more than two-thirds over four weeks, and European export controls that could put our entire supply of vaccines at risk.

Provinces and territories, which in mid-January got close to vaccinating 50,000 people a day, only vaccinated 5,000 people Jan. 31. Canada, which was one of the first countries to start vaccinating its citizens in mid-December, has fallen out of the top 30 countries when it comes to the proportion of people vaccinated.

But there was some good news. Europe's assurances to Canada that the export controls wouldn't stop Canadian shipments came through and new deliveries from Pfizer and Moderna are already landing in Canada.

A spokeswoman for the European Commission said that controls would be used "only in very limited cases" and that Europe is particularly mindful about the impact it could have on countries like Canada, with no domestic COVID-19 vaccine production currently.

On Tuesday afternoon, Anand received confirmation from the COVAX Facility that Canada would be shipped at least 1.9 million and as many as 3.2 million doses of AstraZeneca's COVID-19 vaccine by the end of June.

But Wednesday morning, information COVAX published on its website listed only the smaller amount and the international body has not given Canada any explanation.

The documents warn all deliveries are contingent on supplies available.

Canada invested $440 million in COVAX last fall, half to secure up to 15 million doses of vaccine for Canada and half to buy vaccines for low- and middle-income countries that can't afford vaccines on their own.

Cecely Roy, a spokeswoman for Anand, said COVAX hasn't explained the discrepancy between its communication to the Canadian government and what it posted publicly. The facility has also not responded to a query from The Canadian Press.

With two doses of vaccine required per person, the gap could be the difference between vaccinating another half-million Canadians before Canada Day.

Canada is also feeling heat from critics who argue Canada is contributing to vaccine nationalism, using its wealth to buy up doses and not doing enough to ensure vaccines get distributed equitably worldwide.

International Development Minister Karina Gould said that is why Canada joined COVAX. But Gould balked at the idea that Canada should forego deliveries from COVAX in favour of letting the facility send more doses to the world's poorest places.

"How can this be true!" she wrote on Twitter.

How can this be true!

In QP yesterday,I asked ⁦⁩about risks of vaccine nationalism, the need for global efforts to vaccinate all & what Canada is doing. I was not told we are taking vaccines from poor countries. ‘No One Is Safe Until Everyone Is Safe’ https://t.co/qvcPcUYKcO

Katrina Plamondon, an assistant professor in the School of Nursing at the University of British Columbia Okanagan and a spokesperson for the Canadian Society of International Health, said equitable access to vaccines is critical.

But Plamondon said Canada's doses from COVAX are part of the deal it made when it joined, and Canada made one of the most significant contributions to help fund COVAX to date. She said the government is under so much pressure at home to beef up vaccine supplies that turning down any potential doses isn't really an option.

"It would be politically difficult to refuse those doses," she said.

Opposition leaders and provincial governments are expressing exasperation at the vaccine rollout.

"We knew over a year ago that the way through this pandemic, one of the key tools we needed to fight this pandemic would be the vaccine," NDP Leader Jagmeet Singh said.

The Liberals remain firm that their effort to procure vaccines from seven different suppliers will still allow them to live up to the promise that every Canadian who wants to be vaccinated can get the shots by the end of September.

Canada has secured 40 million doses each from Pfizer-BioNTech and Moderna, which together should be enough to vaccinate everyone. But three more vaccines — from AstraZeneca, Johnson and Johnson and Novavax — are likely to be approved within the next two or three months, adding another 82 million doses to the pile.

Gould said Canada is still working on a strategy to donate excess doses through COVAX.

The latest numbers on COVID-19 vaccinations in Canada show the country has surpassed one million doses given for the first time.

According to the federal government, the provinces reported 13,768 new vaccinations administered Wednesday for a total of 1,000,862 doses given.