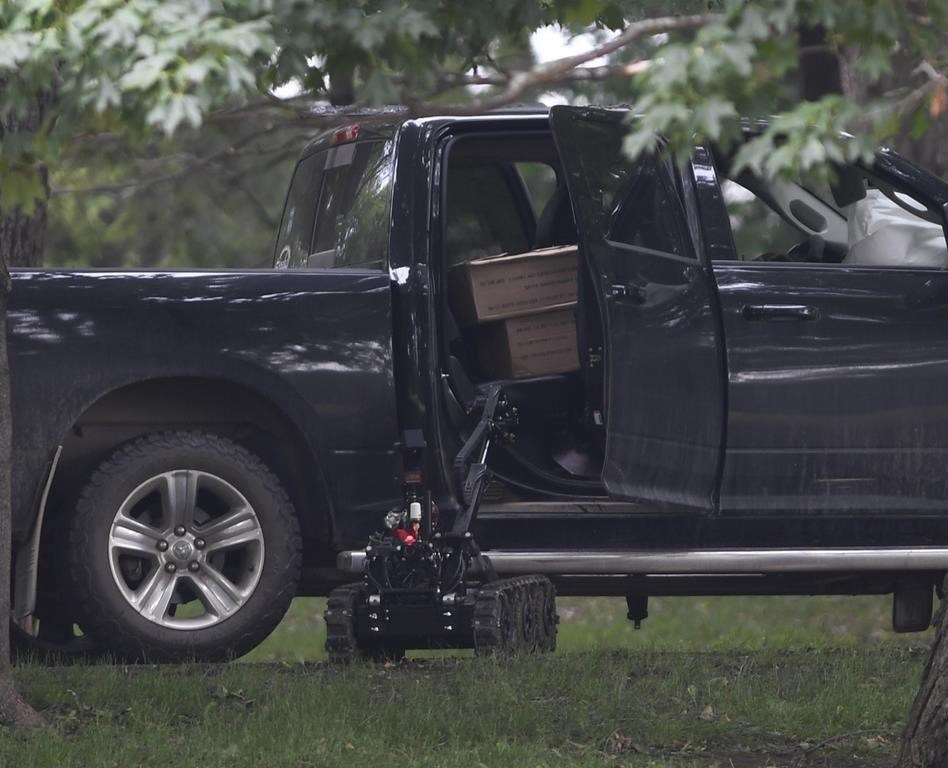 A police robot approaches a pickup truck inside the grounds of Rideau Hall in Ottawa on Thursday, July 2, 2020. THE CANADIAN PRESS/Adrian Wyld
Previous story
Next story

OTTAWA — A man accused of ramming through a gate at Rideau Hall and heading toward Justin Trudeau's home while heavily armed pleaded guilty to eight charges in court Friday.

Corey Hurren, a Manitoba military reservist and sausage-maker, faced 21 weapons charges and one of threatening the prime minister.

However, he pleaded guilty to eight charges involving possession of loaded firearms in a public place, possession of prohibited weapons and a high-capacity magazine without authorization and mischief by wilfully damaging property.

Hurren drove a truck onto the grounds of the Governor General's official residence on July 2 last year and set out on foot toward the prime minister's home.

He was initially accused of uttering a threat to "cause death or bodily harm" to Trudeau, who was not home at the time. Police were able to talk Hurren down and arrested him peacefully after about 90 minutes.

In an agreed statement of facts read into the court record, Hurren told police he didn't intend to hurt anyone, and that he wanted to arrest Trudeau to make a statement about the federal government's COVID-19 restrictions and its ban on assault-style firearms.

Hurren, who told police he hadn't qualified for emergency aid benefits, was angry about losing his business and his guns. He believed Canada was turning into a communist state.

At no point did Hurren tell police he wanted to kill Trudeau, according to the statement.

During a police interview after his arrest, Hurren was asked what his plan was and replied: "I don't think there was one."

Asked if he had any regrets, Hurren, who'd spent two days driving from Manitoba to Ottawa, said he wished he'd stopped to see the Terry Fox statue near Parliament Hill.

During a police interview after his arrest, the accused was asked what his plan was and replied: "I don't think there was one."

Police seized five firearms from Hurren at Rideau Hall and 11 more from his Manitoba residence.