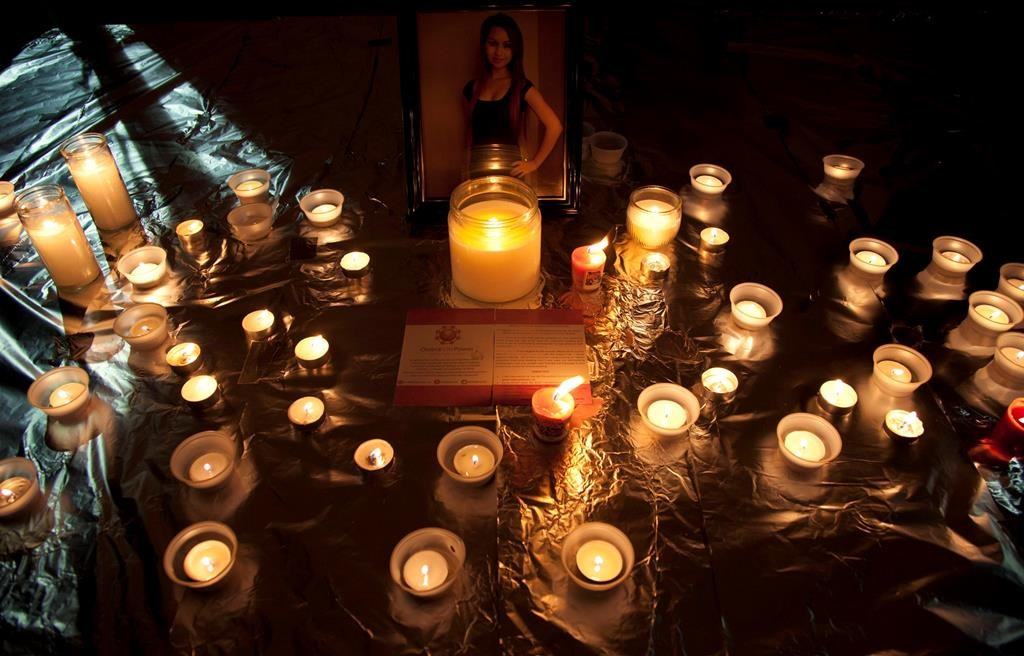 Candles are seen in front of a picture of Amanda Todd during a memorial for her in Surrey, B.C., on Friday, Oct. 19, 2012. File photo by The Canadian Press/Jonathan Hayward
Previous story
Next story

A Dutch man accused of extorting and harassing British Columbia teenager Amanda Todd has been extradited to Canada, more than eight years after her suicide drew global headlines.

The B.C. Prosecution Service said Friday that Aydin Coban is in custody and made his first appearance in a courtroom in the province on Dec. 8.

Coban is charged with extortion, criminal harassment, communication with a young person to commit a sexual offence and two counts of possession of child pornography.

Todd's mother, Carol Todd, said she felt a "shock" to her system when she learned on Dec. 7 that Coban's plane was landing in Canada.

"I was fearful that it would never happen, because of what the pandemic did to the world," she said. "It actually brought me back emotionally to October of 2012."

That was the month when Todd, 15, killed herself. Shortly before her death, she posted a YouTube video in which she silently used handwritten notes to describe the online torment she had faced.

In the video, she said she was in Grade 7 when she was asked to expose her breasts during an online chat. She said she received a Facebook message from a man a year later threatening that if she didn't "put on a show" for him, he would send the webcam picture to her friends and family.

Her story spurred a national conversation about online harassment and sexual exploitation. Todd's case and others prompted the Canadian government to introduce legislation that criminalized the distribution of intimate images without the person's consent.

Coban has not entered any pleas to the charges and his next appearance is Feb. 12 in B.C. Supreme Court in New Westminster for a pre-trial conference, the prosecution service said.

His Amsterdam-based lawyer, Robert Malewicz, did not immediately respond to a request for comment, but Coban has previously denied the allegations against him.

In 2015, one year after RCMP initially announced charges against him while he was awaiting trial in the Netherlands on a separate matter, Coban penned an open letter professing his innocence.

A Dutch man accused of extorting and harassing British Columbia teenager #AmandaTodd has been extradited to Canada, more than eight years after her #suicide drew global headlines.

"I'm not the so-called tormentor of Miss Amanda Todd or of anyone else for that matter. I've been in jail exactly a year now for things I haven't done," he wrote.

In 2017, Coban was convicted by a Dutch court and sentenced to nearly 11 years in prison for online fraud and blackmail of 34 young women and five men.

A Dutch court approved his extradition to Canada shortly afterward.

Carol Todd went to Amsterdam in February 2017 so that she could see Coban face-to-face at his trial there. She described it as a "surreal" moment, and said it prepared her somewhat for seeing him at his trial here.

The mother has become an advocate against online exploitation and she said her daughter's story lives on through social media in order to help others.

"I am just blessed that (the extradition) has happened and that Amanda's voice can still be heard, and it'll bring another chapter to her story."