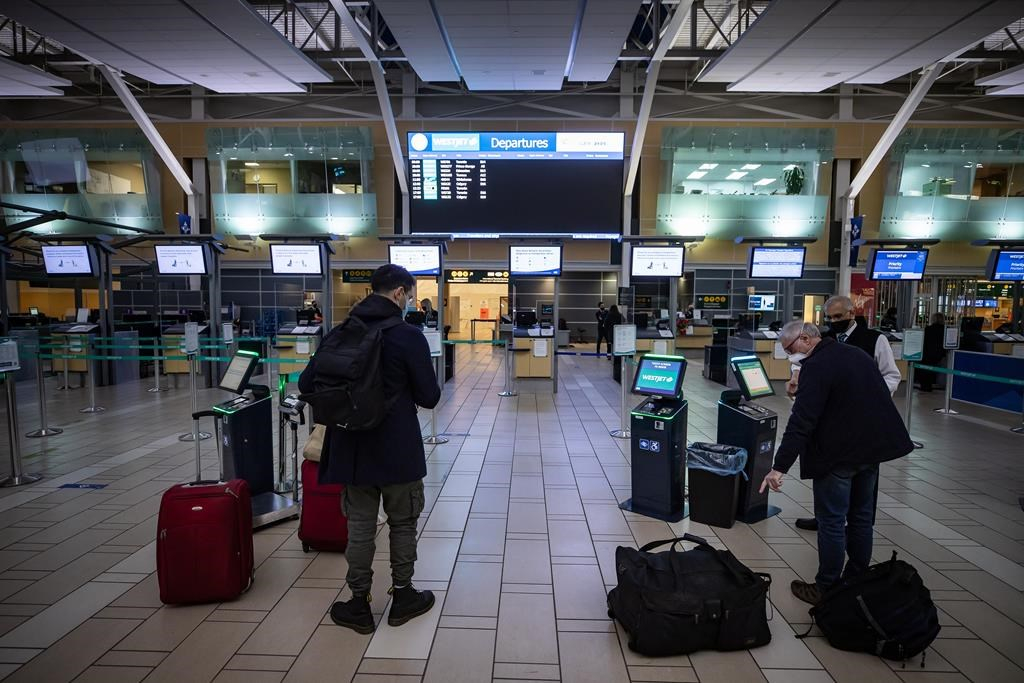 A WestJet employee assists a person checking in for a domestic flight at Vancouver International Airport, in Richmond, B.C., on January 21, 2021. File photo by The Canadian Press/Darryl Dyck
Previous story
Next story

Hotel operators seeking to take part in Canada's mandatory three-day quarantine for returning travellers can now access the criteria, though it comes as cold comfort to a battered industry.

The conditions posted online put the government one step closer to fulfilling its late-January pledge that all passengers returning from non-essential trips abroad will have to self-isolate in a federally mandated facility for up to 72 hours at their own expense.

The government has not said when the measure, which aims to head off COVID-19 cases and contagious variants of the novel coronavirus at the border, will come into effect.

Hoteliers say the criteria seem reasonable, but doubt the quarantine rule will deliver a significant boost in business to the hammered hospitality sector.

To qualify as a "listed hotel," lodgings must be near one of the four airports currently accepting international flights — in Montreal, Toronto, Calgary and Vancouver.

They must provide transportation from the airport, free wireless internet access and no-contact meal delivery to rooms, according to the Public Health Agency of Canada.

Hotels would also have to set up a process for brief outdoor breaks and report daily check-in and checkout numbers, as well as non-compliant guests to the agency. That means monitoring traveller movement within the building, it says.

Hotel submissions are due on Wednesday, two days after the criteria were posted online.

Hotel operators question whether the quarantine order, which will see guests pay upwards of $2,000, including the cost of a mandatory COVID-19 test, will help them rebuild after a sector collapse.

"I don't think this is going to boost anything," said Eve Paré, who heads the Hotel Association of Greater Montreal.

Association members have lost $700 million in room revenue and laid off 90 per cent of their staff, she said.

"It's been a disaster since the very beginning of the pandemic."

She added that the health agency's criteria seem easy to meet for hotels that lie within the requisite 10-kilometre radius of the airport.

"What they ask, it's pretty much what's already there," she said, referring to stipulations from ventilation to laundry to cleaning protocols. Hotels that have all but shut down will have to rehire cooks or order food from off-site, she noted.

The need to quarantine in a hotel is one of a series of federal measures targeting international travel in the past month.

Prime Minister Justin Trudeau announced on Jan. 29 that Canadian airlines had suspended flights to Mexico and the Caribbean until April 30, and that hotel self-isolation was en route.

As of Jan. 7, residents who choose to fly abroad have had to provide proof of negative results for a COVID-19 test taken less than 72 hours before departure back to home soil.

The upcoming quarantine rule has faced resistance from civil liberties advocates concerned about its impact on mobility rights.

In a letter to the federal transport minister and attorney general, the association demanded Ottawa carve out quarantine exemptions and fee waivers for certain situations.

The quarantine order is not the only area where Ottawa is playing catchup.

The Canadian Transportation Agency now faces a backlog of more than 16,000 unprocessed complaints from air passengers.

The buildup follows a surge of complaints after airlines began cancelling flights en masse without refunding customers starting in mid-March, as well as a slew of complaints in the preceding months when a passenger rights charter came into force.

About 60 per cent or nearly 8,000 of the roughly 13,400 complaints filed to the agency since mid-March relate to refunds, the regulator said in an email Monday.

"It really underscores the need for the government to find some way to mandate the airlines to provide passenger refunds," said NDP transport critic Taylor Bachrach.

“The question for the government is, what improvements are they going to make to ensure that passenger complaints actually get heard by the CTA?"

The agency took 157 business days on average to resolve a complaint in 2020-21, compared to an average of 55 business days the year before, according to the regulator's response to an order paper question from the NDP.

Marc Garneau, when he was federal transport minister, announced in November the government planned to negotiate an aid package for struggling airlines that would be conditional on them agreeing to offer reimbursement for cancelled trips, but negotiations have faltered.

"To the extent that the announced negotiations between the government and airlines on financial assistance result in the payment of refunds to some passengers, a portion of the almost 8,000 complaints referenced above may be quickly resolved," the transportation agency said.

Fresh funding allocated to deal with the influx of complaints allowed it to start hiring 29 new employees in June and retain 32 others whose terms were set to wrap up last spring, the regulator said.

It has processed some 9,000 complaints over the past 11 months.

By The Canadian Press | News | February 8th 2021
Coronavirus in Canada