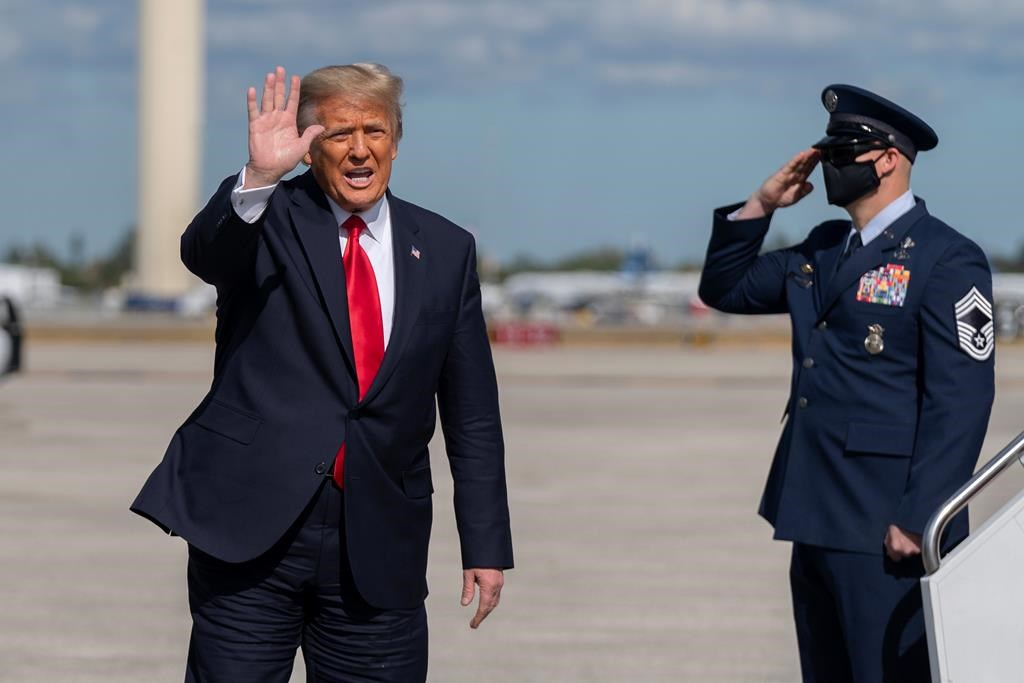 Former president Donald Trump waves to the members of the media after his final flight on Air Force 1 at Palm Beach International Airport in West Palm Beach, Fla., on Jan. 20, 2021. File photo by The Associated Press/Manuel Balce Ceneta
Previous story
Next story

United States senators relived a terrifying day of reckoning for American democracy Tuesday as they began the process of deciding the political future of former president Donald Trump.

Now-infamous footage of Trump's fateful speech outside the White House — "if you don't fight like hell, you're not going to have a country anymore," he said — was interlaced with jarring, profanity-laced clips from the ensuing melee.

The video included closed-circuit images from inside the very chamber where senators sat and watched it Tuesday — images that captured their own fear and frantic escape to safety.

"Our case is based on cold, hard facts," said lead impeachment manager Rep. Jamie Raskin, who closed with an emotional account of how his grieving family was on the Hill that day.

Raskin's 25-year-old son Tommy died last month, and his funeral was the day before the riot, he explained. His 24-year-old daughter and his son-in-law were with him on Jan. 6, despite the plans of Trump supporters to march on the Capitol.

"They asked me directly, 'Would it be safe?' And I told them, 'Of course it should be safe. This is the Capitol," Raskin said.

They rode out the chaos hiding under Raskin's desk, in the care of his chief of staff, "placing what they thought were their final texts and whispered phone calls to say their goodbyes," he said, fighting tears.

"They thought they were gonna die."

When he wasn't playing on emotions or rekindling bad memories, Raskin poked holes in Trump's principal argument that a former president can't be convicted on an article of impeachment.

That, he argued, would codify a "January exception," giving every sitting president free licence to do what they like in the final weeks of their terms, without fear of repercussions.

"It's an invitation to the president to take his best shot at anything he may want to do on his way out the door, including using violent means to lock that door — to hang on to the Oval Office at all costs."

Bruce Castor Jr., Trump's lead counsel, took the podium in the afternoon, framing the impeachment effort as an assault on his client's first-amendment right to free speech.

"This trial is not about trading liberty for security," Castor said. "It's about suggesting it is a good idea that we give up those liberties that we have so long fought for."

Article 14 of the constitution, which addresses insurrection, was clearly written to deal with former Confederate supporters who have been convicted in a court of law, he said.

The constitution also clearly states that a president who is convicted on an article of impeachment "shall be removed from office," he added.

"What is so hard about those words to understand?" Castor said.

"President Trump is no longer in office. The object of the constitution has been achieved. He was removed by the voters."

In the end, however, senators voted 56-44 to allow the trial to proceed, which it will do at noon Wednesday.

David Schoen, a former lawyer for pardoned Trump operative Roger Stone, dismissed Raskin's video as an exercise in manipulation and the trial itself as a partisan bid to remove the former president from the political landscape forever.

If Trump is convicted, an outcome that needs two-thirds of the senators present to support it — 67 of the full complement of 100 — the Senate would then proceed to vote on whether to permanently bar him from running again.

"A great many Americans see this process for exactly what it is: a chance by a group of partisan politicians seeking to eliminate Donald Trump from the American political scene," he said.

"They hated the results of the 2016 election and want to use this impeachment process to further their political agenda."

Trump is not just the only U.S. president to be impeached twice. He's also the only one ever to stand trial in the Senate after relinquishing office.

"It is hard to imagine a clearer example of how a president could abuse his office, inciting violence against a coequal branch of government while seeking to remain in power after losing an election," said impeachment manager Rep. Joe Neguse.

"Presidents can't inflame insurrection in their final weeks and then walk away like nothing happened."

However, since conviction needs a two-thirds vote in a Senate evenly split 50-50 between Democrats and Republicans, the odds of Trump becoming the first former president to be convicted are long.

And when it comes to impeaching Trump, Americans seem to be just as divided as the Senate, a new poll suggests.

Of the U.S. respondents to the poll, 54 per cent said they would like to see Trump banned from a 2024 run, while 39 per cent said he should be allowed to seek the job again.

Online polls cannot be assigned a margin of error because they do not randomly sample the population.