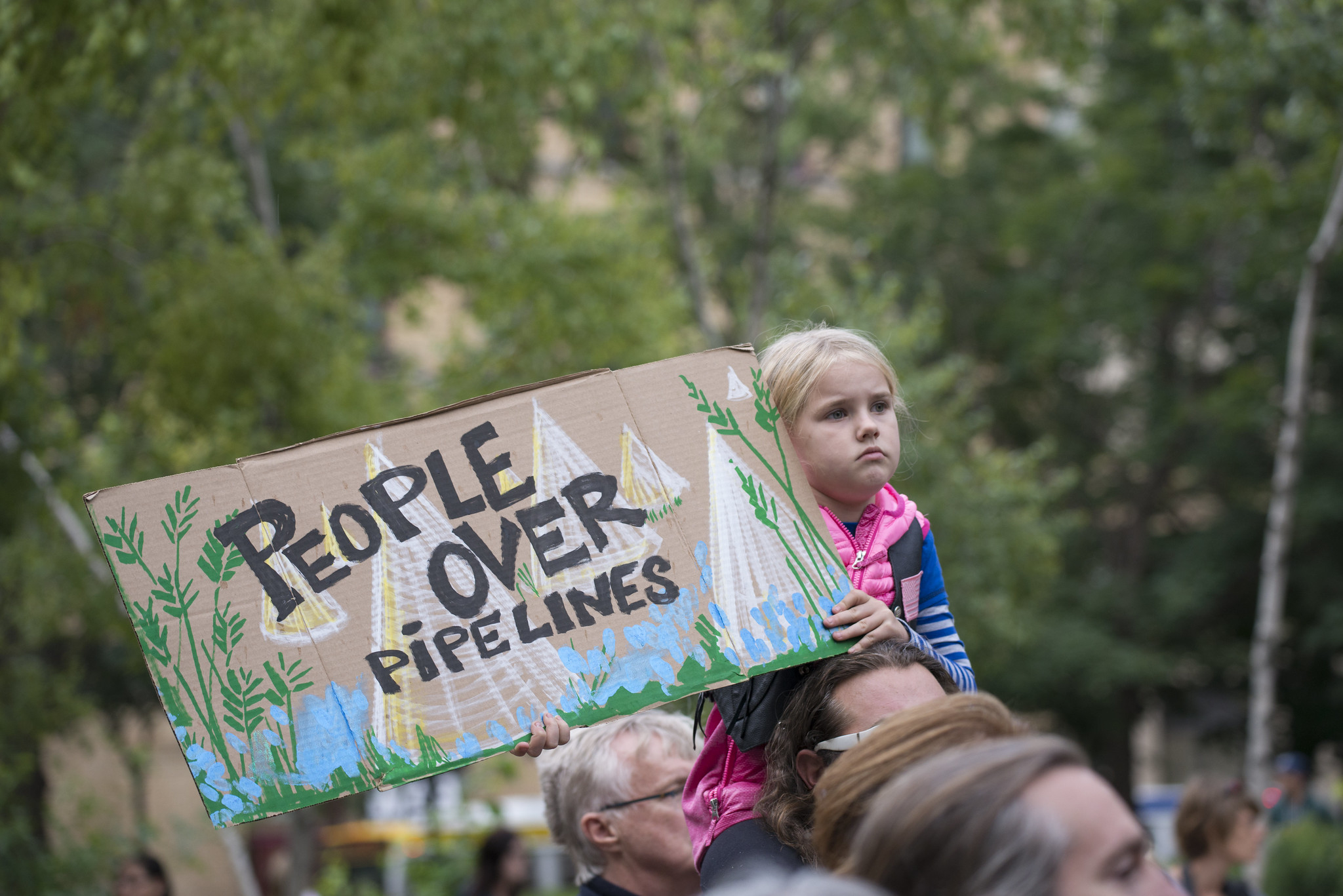 A rally against the Dakota Access pipeline in St. Paul, Minn., in 2016. The grassroots movement to stop DAPL has been one of the most high-profile Indigenous rights and climate justice campaigns in recent years. Photo by Fibonacci Blue/Flickr (CC BY 2.0)
Previous story
Next story

This story was originally published by the The Guardian and appears here as part of the Climate Desk collaboration.

A coalition of prominent celebrities, Indigenous leaders and environmental groups have written to Joe Biden and Kamala Harris urging them to shut down the Dakota Access pipeline (DAPL), which is operating without a legal permit.

The letter comes on the eve of a key court hearing which could lead to DAPL’s oil operations being suspended while the U.S. Army Corps of Engineers conducts a robust environmental impact review ordered by the court last year.

The president also faces pressure from a group of Lakota Native American youth who took part this week in a relay run across the Standing Rock Sioux Nation to the Cannonball River, the site of the #NoDAPL resistance camps in 2016.

The actions follow a wave of environmental justice and climate action policies announced by Biden since taking office which include cancelling the Keystone XL tar sands oil pipeline, rejoining the Paris Agreement and halting construction of the southern border wall.

The letter, which is also signed by the Sunrise Movement, Indigenous Environmental Network, 350.org, Zero Hour and the Sierra Club, urges Biden and Harris to remedy what they refer to as a historic injustice.

“As your administration takes action to address the climate crisis and strengthen relationships with Indigenous communities, we respectfully urge you to reverse another harmful Trump administration decision and immediately shut down the Dakota Access pipeline (DAPL) during its court-ordered environmental review,” the letter states.

The grassroots movement to stop the DAPL pipeline has been one of the most high-profile Indigenous rights and climate justice campaigns in recent years, triggering the Standing Rock protests in 2016 which were brutally repressed by security forces.

The grassroots movement to stop #DAPL has been one of the most high-profile Indigenous rights and climate justice campaigns in recent years, triggering the Standing Rock protests in 2016. #pipeline #environment

Since then, the DAPL, which stretches from North Dakota to Illinois, has been mired in permit and legal controversies.

Barack Obama halted the project not long before leaving office, only for Donald Trump to reverse his decision and fast-track construction despite ongoing litigation by the Standing Rock Sioux tribe.

The pipeline was finished and currently transports about 500,000 barrels of crude oil each day, despite a court ruling ordering the army corps to conduct a robust environmental impact review, which should have been done before the project started.

Last month, a judge ruled that the pipeline is operating illegally without the necessary federal permits.

On Wednesday, the court was to hear evidence from the army corps before deciding whether to shut down the pipeline while the environmental review, which could take a year or so, is completed.

Biden has not spoken publicly about DAPL, but last May, Harris signed an amicus brief and joined tribes in calling on a judge to shut it down while an environmental impact study is conducted.