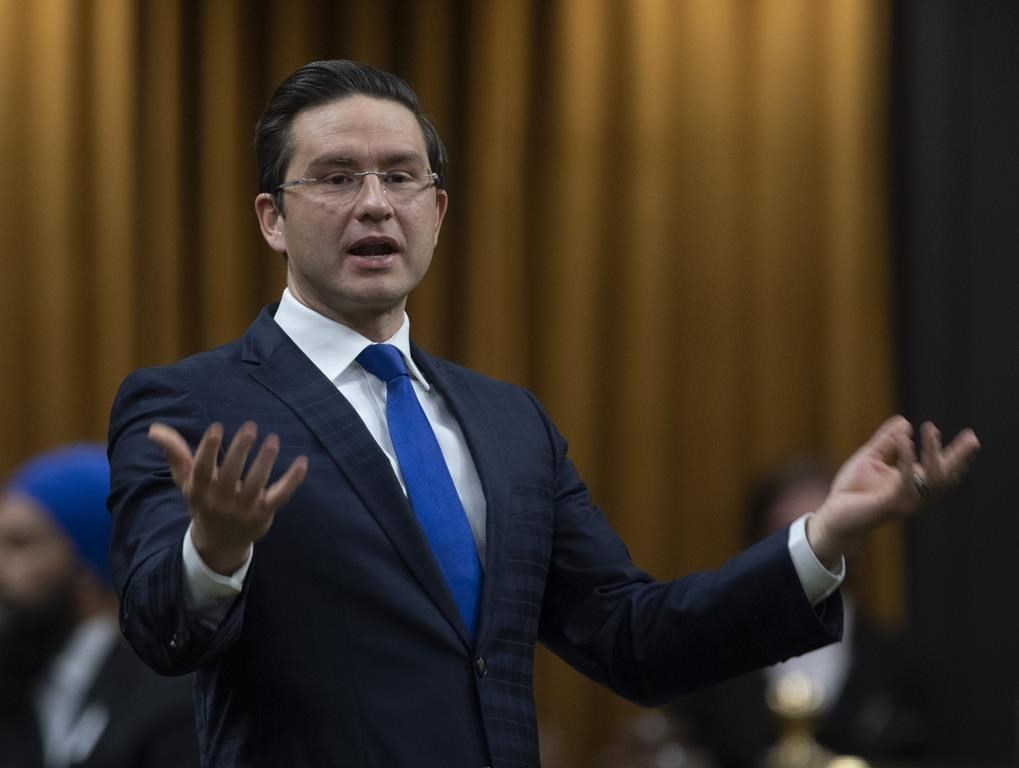 Conservative MP Pierre Poilievre rises during Question Period in the House of Commons on Thursday, December 3, 2020 in Ottawa. File photo by The Canadian Press/Adrian Wyld
Previous story
Next story

Conservative Leader Erin O'Toole scripted more of his party's electoral strategy Wednesday, creating new critic portfolios to signal where his focus will be when Canadians go to the polls: a plan for economic recovery.

His move to shuffle his front benches included punting longtime Tory finance critic Pierre Poilievre out of the marquee role and replacing him with B.C. MP Ed Fast.

Poilievre will still be tasked with an economic portfolio — he's been named the so-called "shadow minister" for jobs and industry — a new post that is one of several that don't explicitly line up in name with actual cabinet positions in the Liberal government.

“Our team is relentlessly focused on rounding the corner in this pandemic and getting Canadians back to work,” O’Toole said in a statement.

“We can’t afford a Liberal economic experiment that has failed wherever it's been tried before and will put untold Canadians out of work."

Poilievre has delighted the grassroots of the party for years with his ability to be a thorn in the Liberal government's side.

A common refrain about him in party circles is that "he does his homework," and his efforts to master the nuances of government spending and attack deficits, along with his zingers in debates, have seen his popularity steadily rise within the party.

Many had hoped he'd run for leadership last year, and while he got as far as building a team and booking a hall to make that formal, in the end he bowed out, citing his young family.

A spokeswoman for O'Toole said the move ought not be seen as a demotion but rather a reflection of the party making job creation the centrepiece of its coming electoral strategy.

"It’s crucial that this issue be spearheaded by a top performer," Chelsea Tucker said in an email.

"Pierre Poilievre is one of the smartest and most capable communicators in our party. We’re thankful that he has agreed to take on this vital role."

Setting him among a number of critics tasked with taking on the government's economic agenda will potentially see Poilievre less in the spotlight, a move that comes as O'Toole is actively trying to grab more of that for himself.

His party recently launched a new ad to bolster their efforts to introduce him to Canadians. He's begun taking a more proactive media strategy in national outlets, as opposed to those catering exclusively to conservative audiences, and he continues to do online town halls and roundtables to get better known.

His decision to bump Poilievre from such a high-profile job set off bombshells among the party's grassroots at a time when many are already agitated over the potential dynamics of the coming policy convention.

Many attribute Poilievre's efforts to tarnish the Liberal brand over the WE Charity affair the sole reason the party's poll numbers were as high as they were when O'Toole won leadership in August.

Poilievre's clips routinely attract more attention online than O'Toole's. At a time where the party is struggling in the polls, blunting someone seen as one of the party's sharpest weapons is raising questions about the overall direction O'Toole wants to take and whether it jibes with the demands of the base.

Those demands will be on full display at the March policy convention, as riding associations have been jockeying to see their ideas placed into the party's policy handbook and in turn the eventual campaign platform.

Among those going full tilt are the well-organized social conservative factions hoping to advance a number of causes dear to them, including erasing the party's stated policy that a Conservative government will never regulate abortion.

Anti-abortion groups are now actively campaigning to have their delegates selected by riding associations to attend the convention, sending out lists to party members telling them who to vote for to attend.

At the same time, some more moderate MPs are trying to counter that by sending out their own lists, frustrated by what some see as efforts to undermine them in their own ridings.