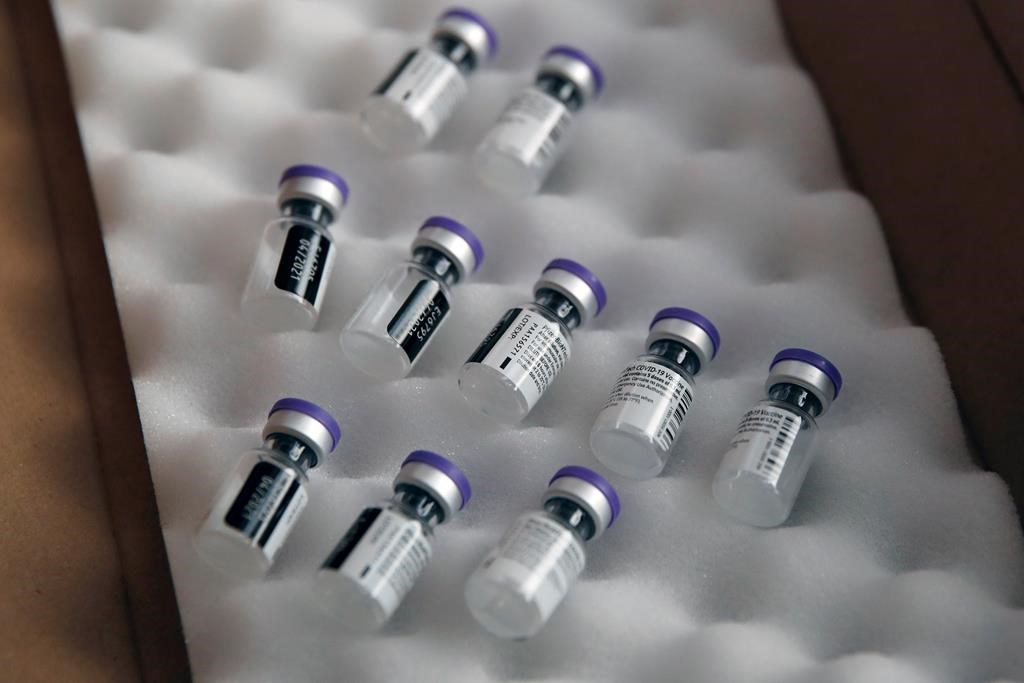 Vials of the Pfizer-BioNTech vaccine against COVID-19 are out of their packaging to be prepared at a vaccination center of the 3rd district, in Paris, on Monday, Jan. 18, 2021. File photo by The Associated Press/Francois Mori
Previous story
Next story

A month-long slowdown in Canada's COVID-19 vaccine deliveries should end next week, with the single biggest shipment of vaccines from Pfizer and BioNTech to date and almost two million doses expected in the next month.

"We're approaching something we're calling the big lift," Prime Minister Justin Trudeau said Thursday in a virtual roundtable with nurses and doctors from around Canada.

Trudeau acknowledged the struggle with deliveries, and how frustrating it has been for Canada, but he said things will get better in the weeks ahead, and even better than that in April, when Canada is expecting as many as one million doses a week.

But the troubles aren't entirely over. Moderna's next shipment on Feb. 22 will now be only two-thirds of what it was supposed to be. Pfizer's deliveries will only meet the promised number of doses if medical professionals can adjust to extracting six doses instead of five from every vial.

Maj.-Gen. Dany Fortin, the military commander overseeing Canada's vaccine distribution, says Pfizer has confirmed it will ship 403,000 does next week, 475,000 the week after that, and then 444,000 doses in each of the first two weeks of March.

Canada's vaccination efforts have slowed to a crawl since mid-January, when Pfizer slowed production at its plant in Belgium to expand it. Instead of getting 1.15 million doses of the Pfizer-BioNTech vaccine between Jan. 18 and this week, Canada was shipped 339,000 doses.

Christina Antoniou, spokeswoman for Pfizer Canada, says that work is now done and the company is on track to deliver four million doses by March 31, as stated in its contract.

Antoniou also said next week's shipment to Canada has been authorized for export by Europe, which imposed new export transparency controls as it tries to get vaccines to its population as well.

Moderna, however, has confirmed its next shipment on Feb. 22 will be only 168,000, two-thirds of what had been promised. Moderna, which delivers once every three weeks right now, shipped 180,000 doses last week. That was only 80 per cent of the promised amount.

Next week also marks the first time Pfizer's label will say the vials each contain six doses. The company found it was overfilling its vials with enough vaccine to get that sixth dose, and Health Canada agreed to the change earlier this week.

Getting that sixth dose requires the use of a low dead-volume syringe, which traps less vaccine in the needle and syringe after an injection, which goes to waste.

Canada has now ordered 72 million of those syringes, and two million were delivered last week. Almost half are to arrive by mid-April and almost 90 per cent by May, with the rest due to come by the end of the summer.

Fortin said those are being shipped to the provinces to be ready for Monday. Several provinces reported not yet receiving any of the low-dead volume syringes. Alberta's chief medical officer Dr. Deena Hinshaw said Thursday that Alberta had received a shipment and now had "a good supply" of them.

Provincial governments are also concerned about how easy it will be to get that sixth dose, even with the special syringes.

Deputy chief public health officer Dr. Howard Njoo said Thursday about 1,800 professionals took part in an English-language training session online Wednesday to learn how to do it. There will be a second session Friday in French.

Federal officials did not answer questions Thursday about whether there is a clause in the label change approval or the contract with Pfizer that would amend the doses being sent if Canada can't get that sixth dose all the time.