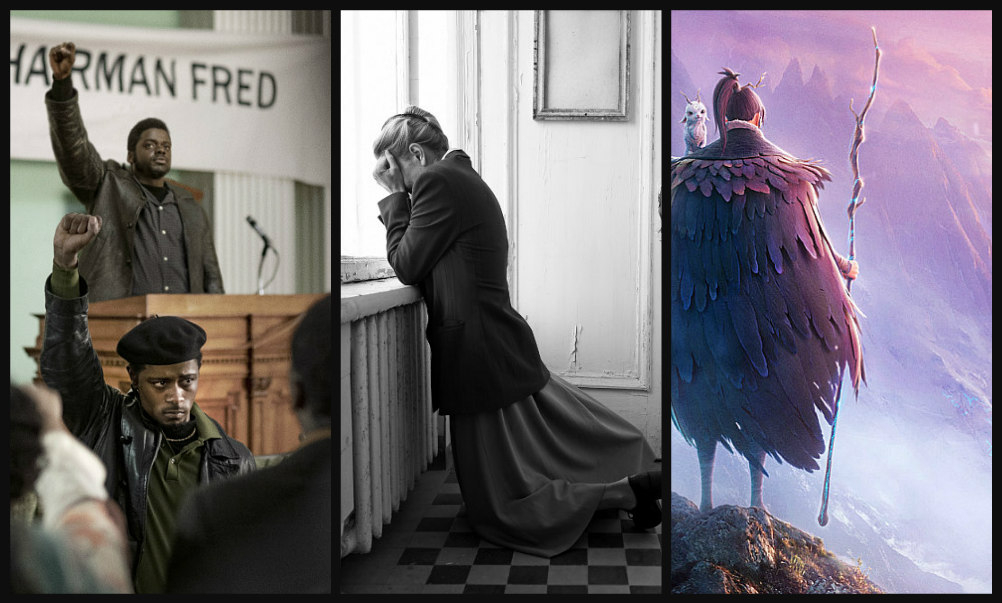 It’s Black History Month and this week we’ve got a new film that’s sure to be a classic. It’s the first one on my list today. And for Chinese New Year, you’ve got two new choices: Jiang Zyia, which I review today, and Skyfire, which I wrote about last week and arrives on VOD today.

The Rendez-vous French Film Festival is on through the weekend with films from France and Quebec and (recommended to me) a toe-tapping film about Acadian music. Check for more here.

And the Toronto Human Rights Watch Film Festival, available all across Canada, starts Thursday. It offers five documentaries billed as “astounding.” They’re free. Two masters of the craft, Jennifer Baichwal and Nick de Pencier, chair the fest, and you can read more here.

Judas and the Black Messiah: 5 stars

To All the Boys Now and Forever: 3

JUDAS AND THE BLACK MESSIAH: Stories like this, even when they’re as true as this, are often watered down in Hollywood movies. Not here. This is one of the most radical films I’ve ever seen about America’s race relations troubles. That’s not all that surprising. Both the director, Shaka King, and two of the producers (including Ryan Coogler, who made Black Panther) founded an artists’ group that exposes human rights violations, particularly by police against Blacks. Also, stories like this have to be hard-hitting these days, and this one has an extra: It plays like a thriller. It doesn’t preach, but you get the message anyway. And it speaks as much to today as to when it took place.

Daniel Kaluuya plays the fiery, charismatic Fred Hampton, head of the Black Panther Party in Chicago in 1969. We feel his power in a thundering speech announcing that he’s a “revolutionary.” We also see the community service projects he leads, but J. Edgar Hoover at the FBI (played by Martin Sheen) wants this “Black messiah” stopped. A field agent (Jesse Plemons) intimidates a “snitch” to infiltrate the group and report back. He’s played by rapper and actor LaKeith Stanfield. Hampton’s fiancee Deborah Johnson is played by Dominique Fishback. Various combinations of these actors and filmmakers have worked together before in other Black-themed films. It’s almost like a stock company now and that seems to have contributed to the powerful, authentic ambience here. You’ll be gripped as it proceeds relentlessly to a shameful ending. Note: Burnaby’s Bron Studios helped finance the film. (Prime VOD, including Cineplex Store. $25 but worth it.) 5 out of 5

DEAR COMRADES: The Russians are making powerful films, too, with a radical view of their history. This one slams the leaders and the ideology of the past and, without too much mental stretching, could also be seen as speaking to the present. All the more surprising then that it’s Russia's official submission to the Academy Awards.

The central event here is a 1962 massacre in which the KGB put down a strike at a locomotive heavy equipment plant. (It’s still commemorated every June.) The Communist Party had lowered wages, while simultaneously raising prices on food and meat. For the good of the economy, it said. People were angry. The strikers were invoking the memory of Lenin. The central character we follow, a local party official and mother of a striker (Yuliya Vysotskaya) wished Stalin was still in charge. But this is the era of Khrushchev, and the party functionaries she deals with are old, boring men who take orders from Moscow and don’t question. The film leads up to the massacre, the coverup and her daughter’s disappearance, and charts her disillusionment along the way. “What am I to believe in if not Communism?” she laments. Andrey Konchalovskiy wrote and directed this very strong film. (Streaming from six theatres across Canada, including https://viff.org.) 4 out of 5

JIANG ZIYA: This film from China is perfect for the Lunar New Year. For some, at least: The people who are familiar with Chinese mythology and the various levels of gods that children learn about as they grow up. At least, I think so. For me, the story was hard to follow. I didn’t know how the gods connect and what was at stake for Jiang, whose story we follow. He has been ousted to be a mortal and is trying to get back to being a god. He has to defeat a demon to do it, but it takes a while for the main story to kick in. There’s a half hour before it that confuses more than explains. The animation in this epic looks great, though.

Jiang was supposed to kill the nine-tailed fox demon, but instead took pity on a young girl who seemed to be connected and saved her. Ten year later, he meets the child again, hears that she needs to find her father and tries to help her. He has to prevent the fox demon from reappearing and must convince the girl that reincarnation is the only way to defy the destiny that controls her. At least that’s how I understand the story. He’s severely tested and, at one point, is ready to give up in shame. He rallies, though, and the film soars with streams of light, colourful clouds and showers, dragons, ghostly spectres and vivid battles. Two extra scenes in the end credits show that it’s meant as a companion to a blockbuster animated film Ne Zha, which came from China two years ago. (Available on digital platforms and on disc.) 2½ out of 5

COWBOYS: We’ve seen films before about fathers running away with their children. Not for this reason, though. Steve Zahn is the father and his child is no longer willing to be a girl and wear dresses. “I’m a boy in the wrong body,” he insists. Mom (Jillian Bell) won’t accept that. Dad does and rides off with him into the Montana backcountry intending to get to Canada where people are nicer, and he can live as he wants.

The plan isn’t well-thought-out, and dad has had a history of emotional problems for which he has to take meds, but the film does touch on family issues that are universal. What’s the effect on the children when a couple splits up? How much is a boy supposed to follow the father he sees as a role model? When does he have to become the more mature one? When dad loses his meds, for one thing. Meanwhile, a detective (Ann Dowd) is on their trail and finding that what she has been told about the case isn’t all there’s to it. For us, it’s an engrossing and strange narrative, told through strong performances and a steady hand by the writer-director Anna Kerrigan. The Tribeca Film Festival awarded her best writer and Zahn best actor. (VOD and digital availability.) 3½ out of 5

TO ALL THE BOYS: ALWAYS AND FOREVER: This is the third in a Netflix trilogy about teenagers in love, but the first for me. I hadn’t heard of the series or how popular it’s been, how critics have followed every nuance in the relationship of Lara and Peter (played with sweet chemistry by Lana Condor and Noah Centineo) or even that all three movies were filmed in Vancouver, though officially set in Portland. What I did find was that the film I saw treats them and their teen problems with respect, recognizes how difficult even minor issues can be at that age and understands the anxiety they can feel about their life ahead. That is the main issue this time as the couple expect to go to university together and get married and have a house and kids afterwards.

Problem: He’s accepted by Stanford U. and she isn’t. Berkeley says yes, but they’d be far apart. Worse, on a trip to New York she’s attracted to NYU, applies and is accepted. So she has to decide what is best for her, regardless of her love life. It’s a grown-up issue in a genre that often avoids them. She handles it maturely. There’s a supportive dad (John Corbett) and schoolmates who feel genuine, even the former love rival who is only mildly bitchy. As a film it’s perfect for teens, older ones anyway because, well, you know what tradition says highschoolers tend to do the night of the prom. (Netflix) 3 out of 5.

SAINT MAUD: If you’re a devout Christian, this film may not be for you. It gives a disparaging view of piety, positions it close to madness at times and makes it look like a burden. It also brings in old elements (self-mutilation in one scene), which seem out of place and not at all contemporary. There’s also a continuing air of dread that draws on horror movie tropes to unnerve you.

All that happens to a young nurse (Morfydd Clark), hired to care for a woman (Jennifer Ehle) who is dying of cancer. The patient still smokes and holds parties, which puts her at odds with the prim nurse who prays nightly, thinks God is speaking to her (we hear him in one of her visions) and maintains that “palliative care is noble work.” Something happened to her in the past. We don’t learn what, but it seems to involve a mistake that a friend says she’s not being blamed for. We see her contort and suffer in religious fervour and lead up to a shocking ending. It again feels not of this time. The atmosphere is strong, but the story doesn’t convince. It’s a first film written and directed by Rose Glass and has just been praised by critics in London. In their British/Irish category, they named it best film, Clark best actress and Glass best filmmaker. (Premium digital and on-demand.) 3 out of 5