By Christopher Reynolds | News, Politics | February 16th 2021
#1211 of 1493 articles from the Special Report: Coronavirus in Canada 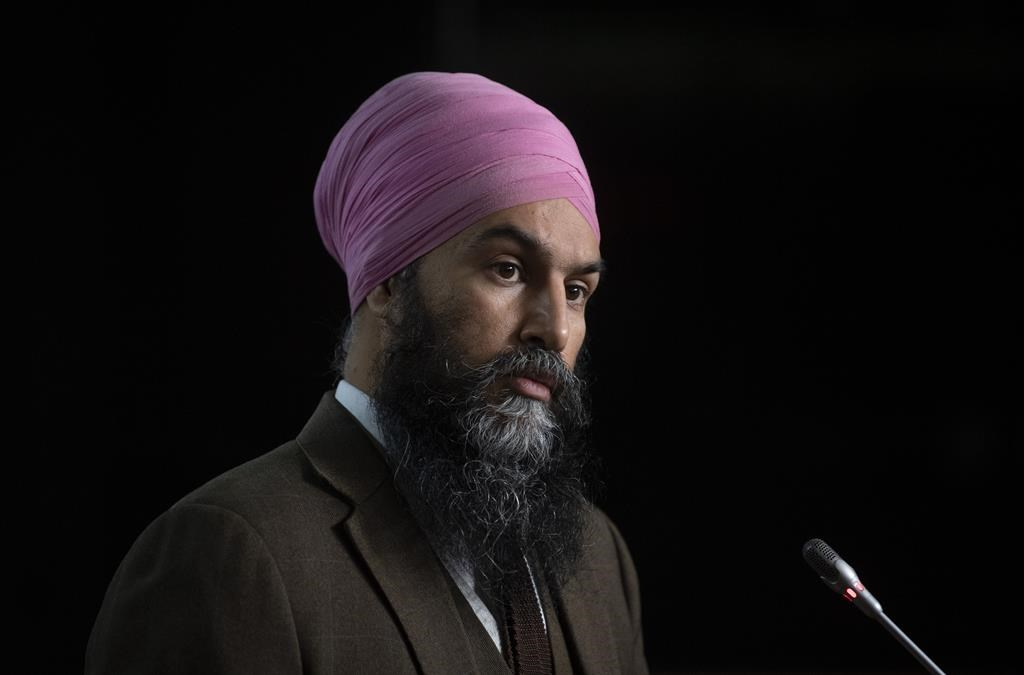 NDP Leader Jagmeet Singh listens to a question from a reporter during a news conference on Parliament Hill in Ottawa, on Wednesday, February 3, 2021. File photo by The Canadian Press/Adrian Wyld
Previous story
Next story

NDP Leader Jagmeet Singh is calling for a quicker, clearer vaccination plan that would see Canada's military deployed across the country to speed up provincial COVID-19 inoculation efforts.

The announcement, presented as a campaign-style pledge ahead of a possible election this year, comes despite the fact that provinces have not publicly requested military assistance with vaccine delivery.

“The provinces haven’t specially asked for that," Singh said in an interview. “But we’ve got the capacity to use the military, set up sites in federal facilities and federal buildings across the country.

"There seems to be this notion that, ‘OK, we get the supply, then it's up to the provinces to deliver it.’ And I don’t buy that."

Health care remains primarily provincial jurisdiction, but the New Democrat leader cited deployment of armed forces to help set up and run vaccination sites in the United States and Scotland.

U.S. President Joe Biden's administration has ordered more than 1,100 troops, including nurses and vaccinators, to several sites. The British army is dispatching roughly 100 soldiers to organize deliveries, vaccine storage and patient registration at about 80 vaccination centres in Scotland.

Provincial leaders in Quebec, Ontario and Alberta, while accepting military support at nursing homes as outbreaks reached a lethal crisis point over the past year, have remained wary of federal overreach in long-term care and other areas.

Conservative Leader Erin O'Toole and Bloc Québécois Leader Yves-François Blanchet have both balked at the idea of nationally imposed long-term care standards, saying provinces are better poised to direct health-care funding in their own backyards.

He highlighted Connaught Laboratories, a public-health institute founded in the early 20th century to combat diphtheria, as a model for government-owned vaccine production. Connaught, which churned out polio and influenza vaccines, was affiliated for decades with the University of Toronto before being bought by a federal Crown corporation and later fully privatized under the Mulroney government in the 1980s.

The third board in the NDP platform plank demanded that Ottawa call off the planned delivery of 1.9 million doses from the international vaccine-sharing program, which is designed mainly to help poor countries afford pricey vaccines.

Canada could get about 500,000 doses of AstraZeneca's vaccine from the program known as COVAX before the end of March, though it has been heavily criticized for taking vaccines from a plan aimed at developing countries that have no direct deals of their own with manufacturers.

"People are not satisfied with the current situation when it comes to vaccines," Singh said.

A new poll suggests the vast majority of Canadians blame Ottawa rather than provincial governments for delays in COVID-19 vaccine delivery.

Prime Minister Justin Trudeau says all Canadians who want a dose will get one by the end of September, despite recent hiccups in production of the Pfizer and Moderna vaccines.

Canada sits far below the top of the heap in vaccine doses administered per 100 people, ranking 40th in total and 17th out of 24 large countries, according to two lists.

Canada's vaccine shipments are slated to rev up again this week, with more than 878,000 Pfizer-BioNTech doses and 168,000 Moderna doses scheduled for arrival by the end of the month.

They follow smaller-than-expected deliveries due to production issues in Belgium and Switzerland.

Pfizer expected to ramp up vaccine deliveries to Canada