Canada likely to face pressure to send troops to Iraq 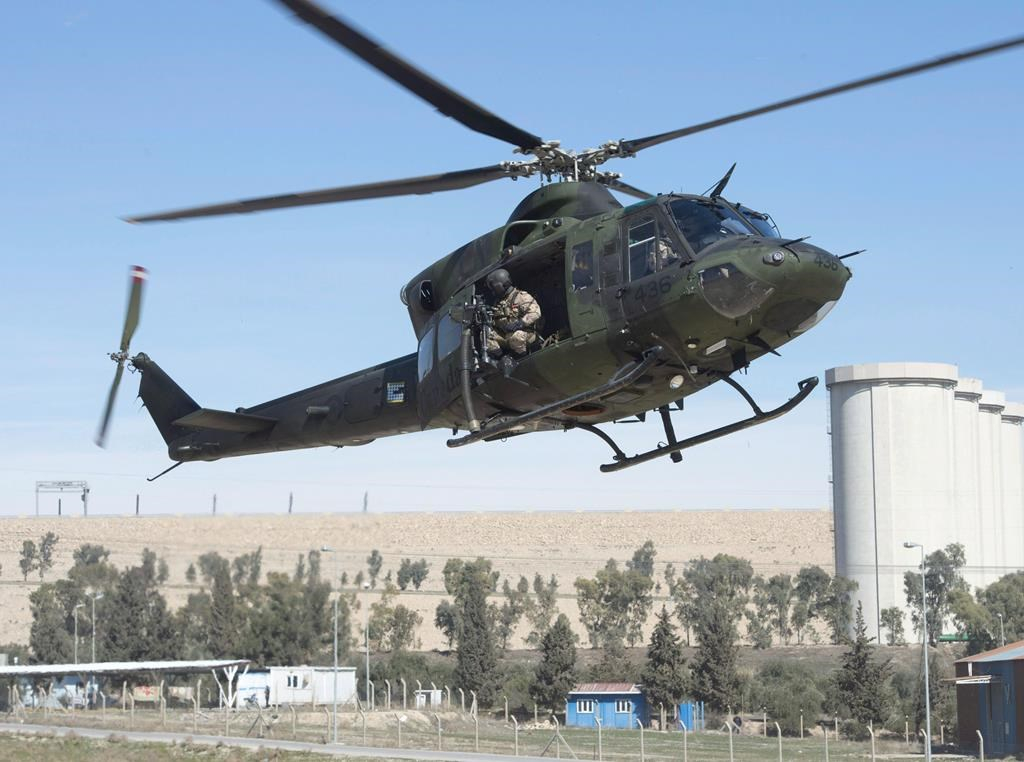 A Canadian Forces Griffon helicopter comes in for a landing near the Mosul dam, on February 20, 2017 in northern Iraq. File photo by The Canadian Press/Ryan Remiorz
Previous story
Next story

Canada is expected to face pressure this week to reverse a recent drawdown of troops from Iraq as the NATO military alliance prepares to expand its presence in the country.

The alliance has persistent concerns about Islamic State extremists and Iranian-backed militias.

NATO secretary-general Jens Stoltenberg predicted this week that defence ministers from across the alliance would approve the deployment of more trainers and advisers to help Iraqi security forces fight the Islamic State of Iraq and the Levant.

Defence Minister Harjit Sajjan will be among those participating in the discussion during a two-day, closed-door meeting where he and counterparts from across the alliance will also discuss Afghanistan and the threats posed by China and Russia.

“I expect ministers will agree to launch an expanded mission with more allied personnel training and advising in more security institutions across the country,” Stoltenberg said during a news conference on Monday.

“The mission will expand gradually in response to that situation. This follows requests from the Iraqi government, in close co-ordination with the global coalition. So that together, we can ensure that (ISIL) does not return.”

The proposed expansion would see a dramatic increase in the number of troops assigned to NATO’s current training mission — and likely result in pressure on Canada to start sending troops back into Iraq after having withdrawn nearly 200 over the past year.

The current NATO mission was launched in 2018 and involved around 500 troops with the aim of building up Iraq’s military so it could better combat extremist groups like ISIL. Canada contributed 200 of those initial troops and the mission was led by a Canadian general.

The Department of National Defence says only 17 Canadian troops are now working with the NATO mission, command of which was passed to Denmark in the fall.

Canada is expected to face pressure this week to reverse a recent drawdown of troops from #Iraq as the #NATO military alliance prepares to expand its presence in the country. #CDNPoli

The NATO mission isn’t the only area where Canada has started to withdraw troops from the war against ISIL, with the military saying it had fewer than 400 troops in the region in January — down from a high of more than 850 several years ago.

(In addition to the NATO training mission, Canada’s war against ISIL has meant deploying special-forces troops to northern Iraq, transport aircraft and intelligence units to Kuwait and training teams to Jordan and Lebanon.)

Canadian military commanders have previously linked the drawdown to a decreased need for trainers as the Iraqi military has increasingly been able to conduct operations against ISIL and other extremists on its own.

A report published last week by the U.S. Defense Department’s inspector general appears to back up that assessment, even though it added that Iraqi security forces continued to rely on coalition air power, surveillance and intelligence.

The report also described ISIL as an ongoing menace, with estimates of between 8,000 and 16,000 extremist fighters in Iraq and neighbouring Syria, and also warning that Iranian-backed militia “posed some of the greatest threats.”

That threat was underscored on Monday when a military base in northern Iraq housing western soldiers — including Canadian special forces — was targeted by a rocket attack. One person was killed and several others were injured, including a U.S. service member.

Defence Department spokeswoman Jessica Lamirande said all Canadian military personnel at the base located next to the Irbil International Airport in Iraq’s Kurdistan region were safe and accounted for.

One of the many Iranian-backed militias in Iraq claimed responsibility for the attack, the latest attributed to such groups, which many observers see as proxies in the broader, slow-burn conflict between the U.S. and Iran.

Sajjan declined in December to say whether Canada’s mission against ISIL would even be extended beyond its current end-date of March 31, instead emphasizing in an interview with The Canadian Press that Canada would continue to be "a reliable partner."

However, the defence minister did say the government would base any decision on ensuring "the hard-fought gains" made in previous years are not lost — particularly in Iraq.

Bessma Momani, a Middle East expert at the University of Waterloo, notes the Canadian military is heavily involved in several other missions, especially at home, where it has been helping with the COVID-19 pandemic.

But she believes Canada can and should contribute more troops to Iraq to ensure the country can continue to stand not only against ISIL, but also Iran and its militias.

“It's a small force, in my humble view,” she said. “The ask is so low, and the potential upside of that is really high.”

This report by The Canadian Press was first published Feb. 17, 2021.