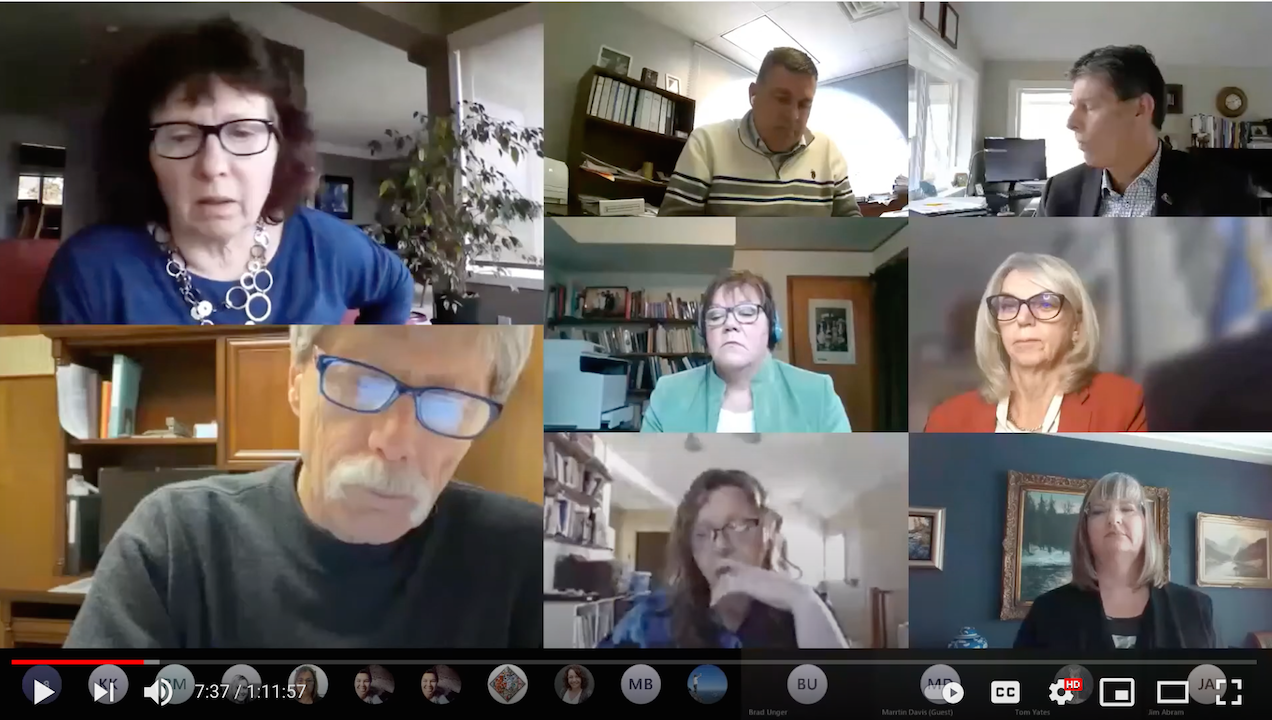 The Strathcona Regional District board (above) decided not to pursue allegations of inside influence in court against Cortes director Noba Anderson. Screen grab photo
Previous story
Next story

The Strathcona Regional District (SRD) board isn't going to pursue allegations of inside influence and the disqualification of Cortes Island director Noba Anderson in court.

Nor did the SRD board opt for its Plan B — to discipline the director.

Instead, after in-camera consultation with legal counsel, the SRD board voted Feb. 10 to issue a public statement to Anderson on its expectations around a director’s conduct when communicating with SRD staff or board members.

The board’s decision follows a public hearing on Jan. 27 to examine allegations Anderson had used her office in an attempt to influence staff decisions regarding the subdivision of land that she co-owns on Cortes Island.

There was little public debate or explanation by directors on the SRD board’s decision at the Feb. 10 meeting.

SRD director Claire Moglove introduced the motion to issue the statement, adding taking Anderson to court was not viable.

“The chances of success in my view are fairly low just based on the circumstances of this particular case, and just looking objectively at it and then listening to our counsel,” she said.

“And I think the risk to the organization … if we were to lose could be quite significant.”

But dropping the issue entirely was also not an option, Moglove said.

“We can't just do nothing because the behaviour needs to be addressed,” she said.

Neither SRD chair Brad Unger nor SRD chief administrative officer David Leitch were available for comment after the board released the statement on the district’s website Friday.

“I am satisfied with their decision, but think that their letter to me was quite heavy-handed given that I am not at fault,” Noba Anderson said.

The allegations centred around a Dec. 17 email from Anderson, sent from her personal account, which asked a staff member to delay a review of information on the application to subdivide the property. A senior SRD staff member had also previously requested Anderson designate one of the other landowners to be the primary contact on the matter.

However, at the hearing, Anderson’s lawyer Matthew Voell argued the board's evidence didn’t support the allegations the director used her public office to influence district staff.

Anderson had informed staff it was a personal matter and had used her personal email account to communicate with them about the subdivision, he said. And the disputed email was a courtesy to the staff member, so he could avoid extra work since the application was going to change, Voell said.

Section 102 of the Community Charter, which concerns inside influence, states a person can’t use their office to exert influence over a staff decision, he said. But, it doesn’t preclude a board member acting in a personal capacity with respect to their property, he added.

According to the SRD board’s recent statement to Anderson, “there’s no ability for elected officials to immunize against insider influence by simply saying they are acting in a personal capacity rather than as a public official, or by using a personal email account to communicate with staff.”

It was better to err on the side of caution when communicating with staff, and to seek advice from SRD’s senior management beforehand if there is any question the communication might violate the Community Charter, the statement added.

The SRD board made a sensible decision in not pursuing the allegations, Anderson wrote in an email Tuesday.

“I am satisfied with their decision, but think that their letter to me was quite heavy-handed given that I am not at fault,” Anderson said.

Anderson said she did not intend to respond to the SRD’s allegations in court, and serving her community was a better use of her time.

“I question the board's need to take their valuable time to focus on me and my supposed transgressions,” Anderson said.

“I would like to see our focus go to the things that most matter to our constituents.”

The SRD's allegations against Anderson are the latest episode in a series of political tussles between the district's board and the Cortes director.

Anderson is currently suing the SRD to cover legal costs and to strike down disciplinary measures against her by the board in connection to a lawsuit in 2019.

Anderson racked up legal fees in her role as a director after a small group of Cortes residents launched an unfounded petition in court in January 2019 to disqualify her from the board alleging a conflict of interest.

However, before the legal case against Anderson was resolved in her favour in June that year, the SRD board decided not to pay the Cortes director’s legal costs.

In October, after the allegations against Anderson were dismissed, the SRD board censured Anderson and removed her from various boards and committees, stating she’d violated a code of conduct by releasing confidential documents from an in-camera board meeting, a closed meeting that took place while the case was still playing out in court.

In her suit against the SRD, Anderson said she provided her lawyer with documents from the meeting on a confidential basis to get legal advice since the materials were tied to the allegations being made against her by the Cortes residents.

The case is ongoing and the next hearing is scheduled for May 25.