Tories to urge Commons to declare crimes against Uighurs genocide 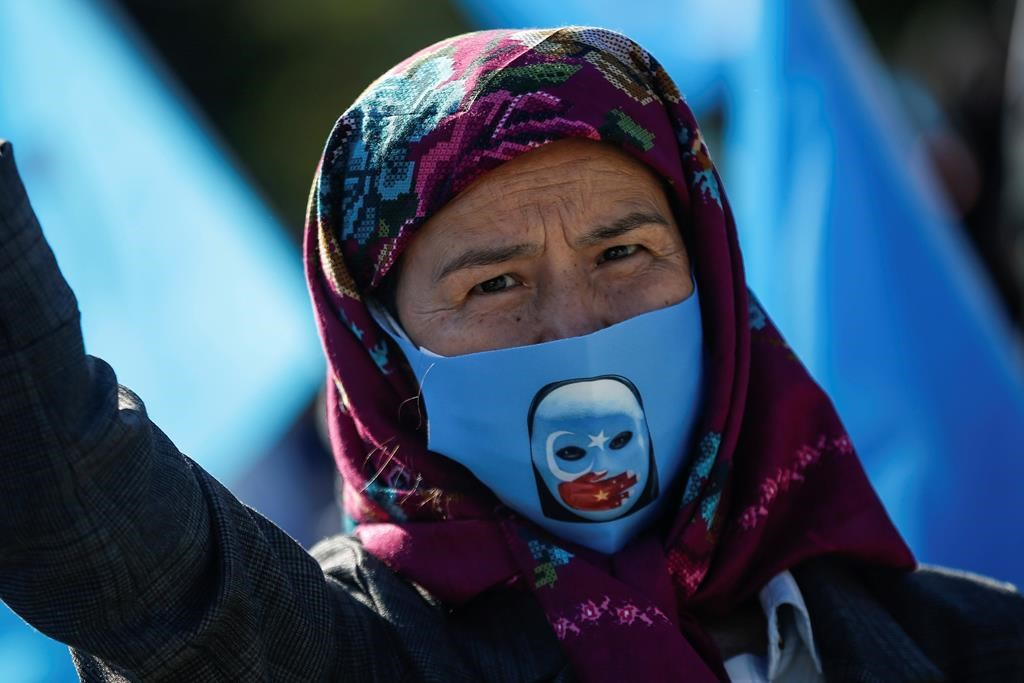 A protester from the Uighur community living in Turkey, participates in a protest in Istanbul, on Thursday, Oct. 1, 2020. File photo by The Associated Press/Emrah Gurel
Previous story
Next story

The Conservatives are calling for the House of Commons to formally declare crimes against minority Muslims in China a genocide.

They're tabling a motion in the House of Commons today, which calls on Canada to take the same stand against China's treatment of Uighur Muslims as other countries have already done.

The move is the latest by the Tories to ratchet up pressure on the Liberal government to move beyond calls for an international investigation and to take action in response to the situation faced by Uighur Muslims in Xinjiang province.

Beijing has denied any wrongdoing. saying it is running a voluntary employment and language-training program.

The Liberals have said they have concerns about human rights violations, but Prime Minister Justin Trudeau has stopped short of echoing U.S. officials, human rights advocates and legal scholars who say those violations amount to a genocide.

"It's a word that is extremely loaded and is certainly something that we should be looking at in the case of the Uighurs," Trudeau said earlier this week.

"I know the international community is looking very carefully at that and we are certainly among them."

On Wednesday, the Tories pressed Trudeau on what more he needed to see, likening his call for further investigation to watching a crime being committed through a window but then knocking on the door and asking to investigate.

There is satellite imagery of the camps, survivor testimony, expert reports, recognition by both U.S. Democrat and Republican officials and even a report by Canadians MP, noted Tory MP Garnett Genuis.

"The victims have spoken. The Prime Minister should believe them. Why the continuing denial?," he said.

The Conservatives are calling for the House of Commons to formally declare crimes against minority Muslims in #China a #genocide. #CDNPoli #CPC #Uighurs

Last year, the Liberals' then-foreign affairs minister did warn that tough talk on China could be met by further consequences for Michael Spavor and Michael Kovrig, two Canadians who have been detained by the Chinese government for 800 days.

The "two Michaels" were picked up just days after the RCMP arrested a Chinese high-tech scion on a U.S. extradition warrant, and Beijing has made it clear that the move was in retaliation for Meng Wanzhou's arrest.

When asked Tuesday whether he feared using the word genocide might jeopardize the two Michaels' situation, Trudeau sidestepped the question.

The Conservative motion going before the Commons today notes that it is generally the policy of the Canadian government to act in concert with allies when it comes to recognizing genocide, and there's already bipartisan consensus on the issue in the U.S.

Therefore, the motion says, the House of Commons should "recognize that a genocide is currently being carried out by the People's Republic of China against Uighurs and other Turkic Muslims and call on the government to officially adopt this position."

Conservative Leader Erin O'Toole is expected to outline his case for the motion at a news conference this morning.

Earlier this week his party joined the call for the 2022 Olympics in Beijing to be relocated due to China's actions. The Tories have also called for sanctions to be imposed against Chinese officials.