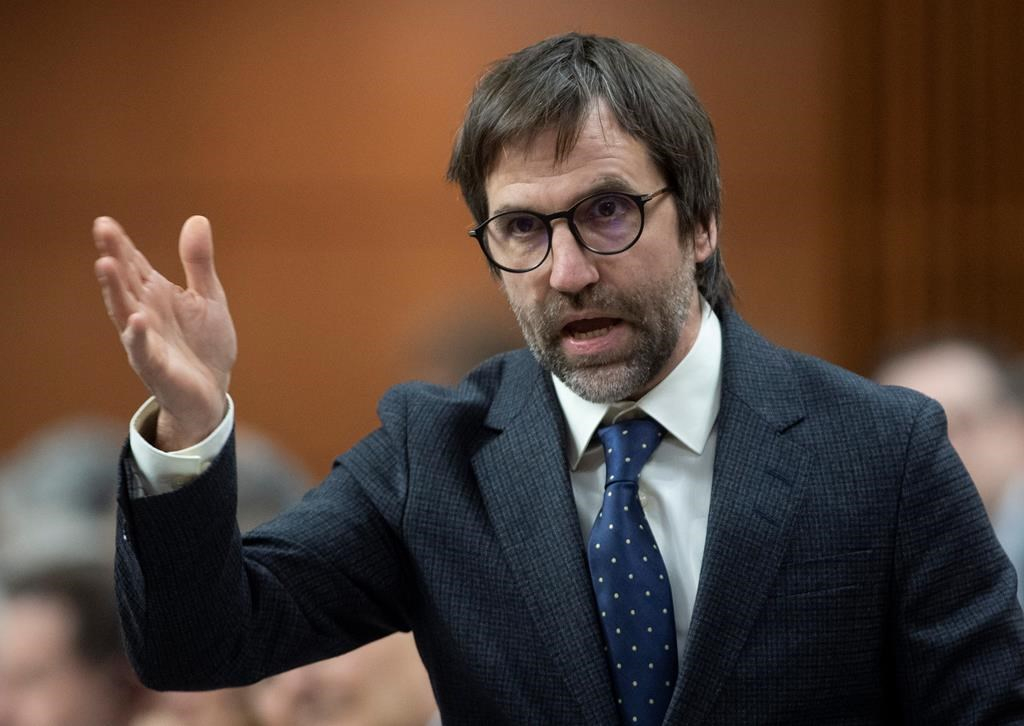 Minister of Canadian Heritage Steven Guilbeault responds to a question during question period in the House of Commons Monday, Feb. 3, 2020 in Ottawa. THE CANADIAN PRESS/Adrian Wyld
Previous story
Next story

Guilbeault blasted Facebook earlier this week after the company blocked Australian users from posting or seeing links to local or international news websites in response to the country's plans to make social media companies negotiate payments to publishers there.

Facebook’s move is “highly irresponsible" because it has restricted Australians’ access to important information such as crisis hotlines and news about forest fires, Guilbeault said.

“If I was the leadership of Facebook, I think I would take a long, hard look at the mirror and really wonder what if I’m doing is the right thing," he added.

"It won’t deter us from moving ahead."

Guilbeault has long been at work on a federal bill that would put an end to the ability of global tech giants — including Facebook, Google, Apple, Twitter and Netflix — to rake in tens of billions of dollars each year without paying tax in the countries they operate in, while simultaneously putting a strain on Canadian media and creator earnings.

He may follow Australia's lead and seek compensation from these companies for news links, but Canadians likely won't know what direction he is leaning until spring, when his legislation is expected to be unveiled.

Meanwhile, Bernhard said media organizations are complaining their revenues are shrinking and they're turning to layoffs because tech giants are swallowing up advertising dollars usually directed to newspapers or broadcasters.

The Shattered Mirror report, which was released by the Public Policy Forum in 2017, showed the total print classified advertising revenue in Canadian daily newspapers shrank from $875 million in 2005 to $119 million in 2015, as social media was gaining popularity.

A 2018 report from the Canadian Media Concentration Project revealed Google had snagged half the country's internet advertising market share in 2018, with Facebook trailing at 27.3 per cent and Bell, Torstar, Twitter and Postmedia sitting at under two per cent each.

With Canadians spending more time at home and online during the COVID-19 pandemic, advertising dollars have become even more lucrative, but cuts have continued. Bell, for example, laid off more than 200 workers at Toronto’s Newstalk 1010 and Montreal’s CJAD 800 at the start of February.

Bernhard said these patterns will continue and Facebook will get more time to bolster its arguments and put more pressure on politicians to take its side, if regulation doesn't come soon.

Facebook believes the Australian model is unfair because news publishers are in control of what gets posted on its platform because they choose to post it themselves or people share a link to it.

“We aren’t able to provide a reaction to proposed legislation until we have seen a draft," Kevin Chan, Facebook Canada's global director and head of public policy, said in a statement.

"We believe there are other options to support news in Canada that will more fairly benefit publishers of all sizes and recognize the value that platforms bring to news organizations. We stand ready to collaborate on these complex issues.”

Bob Fay, managing director of digital economy at the Centre for International Governance Innovation, said Facebook's approach to Australia could hurt the company.

"How many countries can they really afford to start doing that in?" he questioned.

"It just undermines their business model completely, so I think this emboldens countries to take action."

Fay thinks the best action would be some kind of global norm, so tech companies aren't left to deal with each country individually.

Google, for example, has reached a voluntary deal with Australian publishers and could mimic that model elsewhere, but Guilbeault has warned that could be scrapped at any time, if Google changes its mind.

Regardless of the approach, Fay believes time is of the essence.

"What's going on in Australia has lit a fire, but there's been fires burning for a long period of time and yet we haven't seen concrete action, so we'll see if this is enough of a fire or whether it needs to be stoked even more."

Facebook funds a fellowship that supports journalism positions at The Canadian Press.

Torstar holds an investment in The Canadian Press as part of a joint agreement with subsidiaries of the Globe and Mail and Montreal's La Presse.